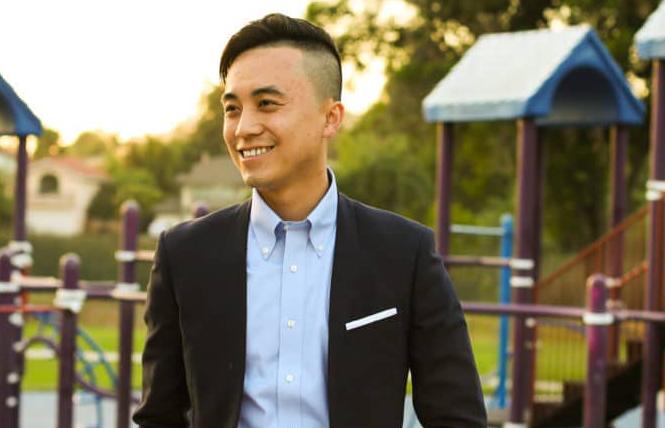 Voters in an Assembly district that straddles Alameda and Santa Clara counties could elect the first bisexual member of the Legislature this year.

Legislative policy adviser Alex Lee, 24, is one of eight Democrats along with one Republican running for the open Assembly District 25 seat, as Assemblyman Kansen Chu (D-San Jose) is running for a Santa Clara County supervisor seat. The district covers portions of North San Jose, Milpitas, Santa Clara, Fremont, and Newark and is seen as a safe Democratic seat.

"What is going to be interesting is it is truly an open primary, so the strongest candidate on their own accord will emerge," Lee told the Bay Area Reporter in a recent phone interview.

"It is certainly a challenge with so many voices crowding the race. The campaign that takes the time to speak to people in the district will end up with the most votes," said Lee, who has knocked on more than 60,000 doors in the district. "Everyone has to work hard to get their name out there."

He told the B.A.R. that rather than seeing two Democrats survive the March 3 primary, he anticipates one of them will compete against the lone Republican in the race, businessman Bob Brunton.

"My district is still in the middle politically wise. It has a lot of conservative unaffiliated voters and Republicans," said Lee, who has raised more than $30,000 toward a goal of $75,000 in the primary race.

Lee and his younger brother grew up in the Berryessa district of San Jose and Milpitas, as their parents divorced when they were young and the siblings shuttled between their homes in the two cities. After graduating from Milpitas High School, Lee earned a B.A. in political science and communication from UC Davis in 2017.

He worked for state Senator Henry Stern (D-Canoga Park) for two years after college and then became a field representative for gay Assemblyman Evan Low (D-Campbell), whom he had interned with while at UC Davis. In order to focus fulltime on his campaign, Lee quit his job on Low's staff late last year.

Should Lee win the Assembly seat at the age of 25, he will eclipse Low's being the youngest Asian American elected to the state Assembly at age 31. Rather than older voters being turned off by his being in his early 20s, Lee told the B.A.R. that many people in their 70s and 80s that he has met have told him they think it is time for a younger legislator to represent them.

"Older people will say to me, 'Yeah, my generation's time is up, it is your guys' time.' People have been surprisingly very positive over all," said Lee.

While he acknowledges his age may be a factor for some voters, Lee is banking on his growing up in the district to demonstrate he is knowledgeable about the needs of its residents.

"When the incumbent decided to step down, a lot of people were saying I should give it a shot and should run," said Lee. "With my legislative experience and hometown knowledge too, I can bring really strong legislative knowledge to Sacramento and great advocacy for my district."

Lee's family is Cantonese Chinese; his parents emigrated from Hong Kong to the South Bay. His father is a semi-retired engineer and his mom is a nurse at Valley Medical Center. The family still has relatives in Hong Kong, thus the recent unrest and protests against the Chinese government's control of the former British territory "resonates with me," said Lee.

The Assembly district's population is predominately Asian American, which Lee sees as giving him an edge in the race. He is proficient in both Cantonese and Mandarin, and his campaign materials are in both English and Chinese.

When the B.A.R. contacted him in late December to confirm he identifies as bisexual, Lee hadn't promoted that he was a member of the LGBT community on his campaign website. He had also flown under the radar of many LGBT Democratic leaders who were unaware of his being an out candidate until recently.

"My identity being Asian I am more conscious about than my LGBT side for some reason," said Lee.

It wasn't until he spoke to the B.A.R. by phone earlier this month that he learned there has never been a bisexual member of the Legislative LGBTQ Caucus in the state Legislature. Since being interviewed, Lee updated his biography on his campaign website to note that he "currently lives in his hometown openly as a member of the LGBTQ community."

His partner of several months is nonbinary but prefers to remain behind the scenes as Lee campaigns for the Assembly seat. While he is out to family and friends, Lee said due to his cultural upbringing he struggles with how to talk about his sexual orientation on the campaign trail in an authentic way.

"Growing up and still to this day it is not very socially acceptable to be LGBT in my community and to some degree in my own family. It is something I haven't figured out how to message organically yet," said Lee. "It is not something I publicly talk about but I should."

Lee will be asking both Equality California, the statewide LGBT advocacy group, and the LGBTQ Victory Fund, which works to elect LGBT people across the country, for their endorsements of his Assembly campaign. But EQCA announced Thursday (January 23) that it had joined the South Bay's LGBT political group BAYMEC, the Bay Area Municipal Elections Committee, in endorsing Kepner in the race; she serves on the West Valley-Mission Community College Board of Trustees and lives in Santa Clara with her husband and their children.

Lee has endorsements from a number of groups for young Democrats and the Silicon Valley Democratic Socialists of America. He took part in a candidate training held by the AAPI Victory Fund, which aims to elect more Asian American and Pacific Islanders to public office. And he served as a campaign manager for two candidates who ran for San Jose city council seats.

"From those campaigns I learned to really value a grassroots approach and a direct voter approach. Too much now Assembly races focus on retail politics, with a lot of ads and direct mail buys," said Lee. "What it comes down to is voters really care about personalized engagement and candidates getting to know them and listen to them. That is the type of grass root campaign I am running now for Assembly."

To learn more about Lee, visit his campaign website at http://www.votealexlee.com/.

UPDATED 1/23/20 to include EQCA's endorsement of Kepner in the race.