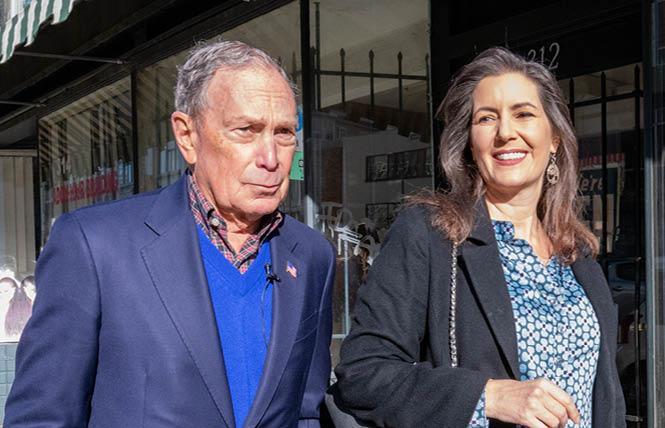 Former New York Mayor Michael Bloomberg brought his presidential campaign to the East Bay January 17, and while he didn't pick up an endorsement from Oakland Mayor Libby Schaaf, he did excite a small crowd that met at Everett & Jones Barbecue.

Schaaf had supported California's junior senator, Kamala Harris, in the Democratic presidential race, but she suspended her campaign December 3.

In Oakland, Schaaf and Bloomberg met at a bagel shop before heading on a short walk.

"I just took a tour of Oakland with your mayor and she's doing a spectacular job," he told the crowd at the restaurant near Jack London Square.

Bloomberg, a billionaire, entered the crowded Democratic field in late November and is employing a strategy whereby he is skipping the four early-voting states: Iowa, New Hampshire, South Carolina, and Nevada, to focus on states like California that vote on March 3, Super Tuesday. He has already spent millions of dollars on television ads in those states.

"California has been a leader on so many issues, and Oakland has been at the forefront," Bloomberg said.

He said his was a campaign of "sanity and inclusion," unlike the current occupant of the Oval Office.

"I'm running to defeat Donald Trump," he said as the crowd applauded.

He said that he intends to build an America for blacks, Latinos, immigrants, gays, lesbians, and transgender people, among others.

"The America I know puts working together ahead of standing apart," he said.

Bloomberg touted his experience running the country's largest city for 12 years. He said he expanded access to health care and raised teachers' salaries 40%, which saw students' graduation rates improve by the same percentage. He did not mention his past support of the controversial "stop and frisk" policy implemented in New York City whereby police stopped millions of black and Latino men back when he was mayor. He did apologize for supporting the practice, at a black church in New York shortly before he formally entered the race.

Bloomberg reminded the Oakland audience that he was elected mayor weeks after 9/11.

"The city was in tatters," he said. "But what happened was people came together."

Some of those in the audience said they were impressed with the former mayor.

"I want to see what happens on March 3, if he picks up any delegates — then I'm all in," Richard told the Bay Area Reporter. "The main reason why I support him is he's the only one, in my opinion, who can defeat Trump."

Richard added that conservative friends and a family member have told him they would support Bloomberg if he became the Democratic nominee.

"I think Bloomberg is a purple candidate," Richard said, referring to someone who can bridge Democrats and Republicans.

In fact, Bloomberg spoke about working across the aisle, and said he'd have no problem doing that.

Prior to Bloomberg speaking, Lafayette attorney Jason Bezis, a straight ally, told the B.A.R. that so far, he's undecided on a candidate.

His main concern with Bloomberg was whether as president, he would continue the Trump policies regarding Israel. In 2017, Trump announced that the U.S. would recognize Jerusalem as the capital of Israel and planned the relocation of the U.S. embassy to that city.

In an email to the B.A.R. after the event, Bezis said he had a chance to ask Bloomberg about Israel and that the former mayor said he's in line with Trump's position and would not move the U.S. embassy out of Jerusalem.

The campaign did not respond to a request for comment.

Alec Maghami, another straight ally, said he's been a Bloomberg supporter "forever." He works in finance, as the former mayor did, and previously lived in New York City.

Bloomberg founded the privately held financial, software, data, and media company that bears his name and is based in Midtown Manhattan.

Dustin Gabele, a straight ally, said he hadn't heard much about the Bloomberg campaign but when he learned of the Oakland event, he decided to check it out.

"I like how he presents himself," Gabele said. "He has a sense for right and wrong."

The night before Bloomberg appeared in Oakland, Politico reported that several people attended a small event with him in San Francisco. Among those present was Leslie Katz, a lesbian and former San Francisco supervisor. She had previously supported Harris.

Katz has not endorsed another candidate for president, but told the B.A.R. she's checking out others in the race.

"Whichever Democrat wins the nomination — and the presidency — they will have a solid group of potential cabinet members to choose from," she wrote in an email. "Each candidate brings a strength to different areas and will be of help to our next president."

"Elizabeth Warren is an extraordinary ally to the LGBTQ+ community," he said in a statement. "She's also willing to tackle the toughest problems we face, including our housing and homelessness crises. Senator Warren isn't afraid to challenge the status quo, and she'll be a visionary leader for our country. I'm proud to stand with and endorse her."

In a statement, Warren announced Wiener as one of her new endorsers, noting he's chair of the California Legislative LGBTQ Caucus. Also endorsing her was gay Berkeley Rent Stabilization Board Commissioner James Chang.

"I'm grateful to have earned the support of state Senator Wiener, who has been on the frontlines of the fight for LGBTQ+ equality for years, along with such an inspiring group of dedicated local leaders," stated Warren. "Together, we'll build a grassroots movement to make our government and our economy work for everyone."