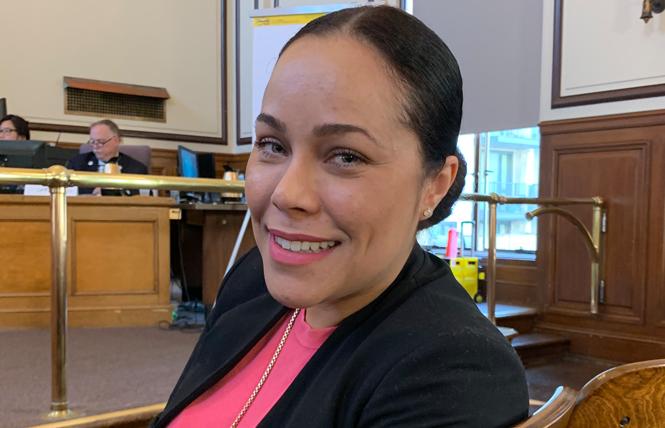 With some 277 applications for new cannabis business permits stuck in a slow-moving queue, the city should consider placing a moratorium on applications.

That was one of the key recommendations made in a new report by the city controller's office, presented at the January 6 meeting of the San Francisco Cannabis Oversight Committee, held at the Department of Public Health office on Grove Street.

The oversight committee advises the Board of Supervisors and mayor about the implementation and enforcement of city laws and regulations regarding cannabis.

The state Medicinal and Adult-Use Cannabis Regulation and Safety Act, which was signed into law in June 2017, creates the general framework for the regulation of commercial medicinal and adult-use cannabis in California. Adult recreational use became legal in January 2018 after the passage of Proposition 64 in 2016.

After the state law was signed, the Board of Supervisors asked the controller's office to track the number of permits awarded and issue a report that makes recommendations as to whether the issuance of cannabis business permits should be subject to any numerical, geographical, or other limits.

The new report gives background on the current situation regarding existing cannabis businesses as well as the status of applications for new businesses.

Currently, there are 37 retail organizations selling cannabis and another 133 that have applied, or are planning to apply, for a business permit. As previously reported in the Bay Area Reporter, only two new retail applicants have been approved: Eureka Sky, at 3989 17th Street, set to open this month, and Berner's on Haight, at 1685 Haight Street, which opened in December.

As stated in city regulations, in order to apply for a permit, one of the people in the group must be approved as an equity applicant, which includes those who were adversely affected by the war on drugs, either because they had been charged with a drug offense or lived in a neighborhood with higher rates of arrests for cannabis.

According to the new report, of the 277 pending applications, almost half (133) want to open a retail store, with the remaining applying for a permit for delivery (46), cultivation (17), manufacturing (31), and distribution (50).

Those in the queue for a retail permit can anticipate an 18-24 month wait while their application is processed, placing a daunting financial burden on the applicants, who are required to have a lease on space before their application can be processed. Among the reasons for the long delays is understaffing in the Office of Cannabis, said the report.

Marisa Rodriguez, director of the Office of Cannabis, commenting on the controller's report at the meeting, said the office "could use support" to make improvements in the lengthy time it takes to complete the application process.

Applicants incurring debt
To cover costs during the application process, many applicants "are incurring debt and/or selling ownership shares in their business to investors who can provide capital," the report said. Currently, other than permit fee waivers, the city does not have any financial assistance for equity applicants, unlike some other cities, such as Oakland.

Although the application processing time will likely decrease in the future, according to the report, "there is such a high number of storefront retail applications (133) that this activity may not be viable" because by the time the application is approved, the market may already be "saturated."

Given this unwieldy equation, the report made four key recommendations:

- Consider additional benefits to equity applicants to help them through the lengthy permitting process, including capital and technical assistance, and no-interest loan funding.

- Consider creating a priority permitting lane or expedited processing for equity applicants in permitting departments other than the Office of Cannabis.

- The Office of Cannabis should consider temporary positions to reduce the backlog of equity applicants and expedite application processing.

Rodriguez said the department could use additional permit analysts and staff who could help with elimination of illicit market sales. Currently, said Rodriguez, "we don't have the resources or staff to even scratch the surface" regarding enforcement of illegal sales.

"We'd be happy to take on the task but would need full support to move forward on abating the illicit market," she said.

Also, in 2018, cannabis business locations had a 2% decrease in property and violent crime, while the city on average had an 8% increase in the same crime types. The report also found that cannabis-only driving under the influence represents less than 4% of the total DUIs in the city.

The report also looked at cannabis-related health indicators, finding that it was "too early" to determine any recommendations regarding legalization and its public health impacts. Locally, the report found that since the 1990s, use of cannabis among high school students has decreased along with national trends; in fact, San Francisco use rates are lower than national averages, the report said.

Rodriguez said that the correct approach in curbing the illicit market would be through abatement by making it difficult to conduct illegal transactions, rather than by criminalizing black market sales.

The task force will meet bi-monthly through the end of the year. Details about its meetings can be found on the Office of Cannabis' new website, www.sf.gov/departments/office-cannabis