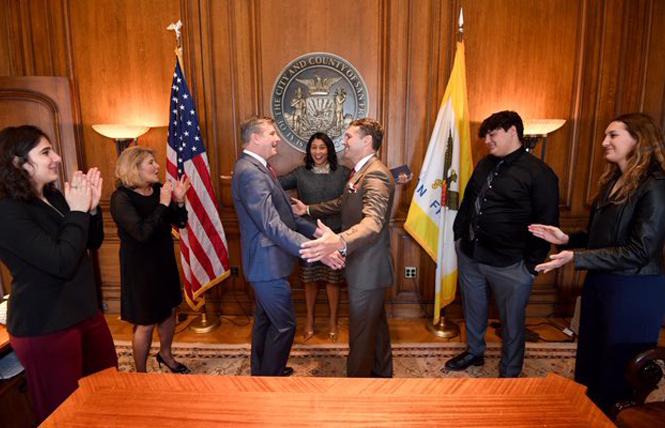 "It was a good day, nine years in the making," Welts, who will turn 67 this month, wrote in an announcement on Twitter.

Welts' career in basketball began in high school when he was hired as a ball boy by the Seattle SuperSonics. He rose through the ranks to be a leader in the NBA front office when the league was transforming itself into the multibillion-dollar enterprise it is today. While working in the Phoenix Suns front office in 2011 he came out as gay, then shortly afterward joined the Warriors and led the initiative to transfer the team from its former home in Oakland to its new digs in San Francisco. (See September 29, 2011 Jock Talk, "Warriors hire Welts."

If there is anyone in sports who comprehends the difference between living a closeted life and an open one, it is Welts. When his first partner, Arnie Chinn, died of AIDS in 1994, Welts had to grieve in silence and alone. A new relationship that started the next year was haunted by the tension of remaining closeted and ended in 2009 — another loss Welts absorbed alone.

Since coming out in 2011, Welts has received overwhelming support from colleagues and the community. He was a major influence in getting the NBA to pull its All-Star Game from North Carolina because of transphobic legislation, and has become an advisory board member of You Can Play. In 2013, the year same-sex marriages became legal in California, Welts marched with dozens of members of the Warriors staff in the San Francisco Pride parade and was a guest at the Alice B. Toklas LGBT Democratic Club's annual Pride breakfast. In 2018, he was elected to the Naismith Memorial Basketball Hall of Fame.

Last month, during a World AIDS Day ceremony at the National AIDS Memorial Grove that marked the return of the AIDS Quilt to the San Francisco Bay Area, Welts received the National Leadership Recognition Award.

He remains one of the few openly gay executives in major sports front offices. Gail Hunter was also in the Warriors front office as vice president of public affairs and event management, and was heavily involved in the drive behind launching the Chase Center, but was hired as an events director by Apple in 2018.

So, maybe no championship ring this season for the Warriors after collecting three in the past six years, but a little more bling for Welts' finger nonetheless.

Suit filed in death of Gay Games basketball player
At a vigil held one year after fashion consultant and avid basketball player Timothy Dean was found dead in the West Hollywood apartment of major Democratic Party donor Ed Buck due to a methamphetamine overdose, an attorney for the Dean family announced the filing of a civil suit against Buck for the wrongful death.

Buck was indicted last year and faces federal criminal charges related to the death of Dean in 2019, Gemmel Moore in 2017, and the distribution of meth to three other men. His trial is scheduled for later this year, when former O.J. Simpson prosecutor Christopher Darden is set to represent him. Buck also faces several state charges

The lawsuit filed for Dean's sisters alleges Buck had "a history of hosting sexual encounters at the property during which he facilitated the distribution, manufacturing or furnishing of illegal controlled substances to his guests, into whom Mr. Buck forcibly injected crystal methamphetamine."

Mark Chambers was a friend of Dean's and played with him in the 2018 Gay Games in Paris.

"He would give the shirt off his back," Chambers said at the vigil. "He literally gave suits to homeless people."

Sharks' hockey-for-all night set
Sports inclusion and diversity will be the theme when the San Jose Sharks host a Hockey is for Everyone Night Sunday, March 29, with a 7 p.m. game against the Arizona Coyotes.

Plans are still being formed and finalized, Sharks front office representatives said. Players will once again have the option of playing with rainbow tape on their hockey sticks, which will then be auctioned off as a benefit to the You Can Play Foundation. Displays will also showcase past year-round Sharks initiatives to work for a more inclusive hockey environment.