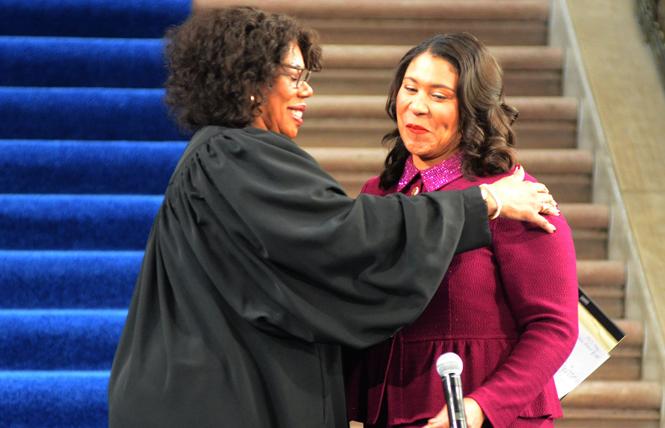 As London Breed enters her first full four-year term as mayor of San Francisco, she has a lengthy to-do list in 2020, from hiring several city department heads and dealing with expected budget deficits to pushing forward on a number of LGBT initiatives she has supported since first being elected to Room 200 at City Hall in June 2018.

After briefly serving as mayor in an interim capacity after the sudden death of Ed Lee in December 2017, Breed won the special election to serve out his term and stepped down as the District 5 supervisor. The city's first African American female mayor, Breed faced little opposition in November as she sought a full mayoral term and was inaugurated in the City Hall Rotunda January 8.

Foremost for the mayor in the coming months will be working with city leaders and the Board of Supervisors to pass a two-year balanced budget by the summer. In mid-December Breed disclosed the city was projecting a budget shortfall of approximately $420 million over the next two fiscal years, out of an annual general fund budget of $6 billion, due to expenses outgrowing revenues.

She instituted an edict for departments to prioritize the needs of the homeless and mental health issues when determining their budget needs this year. The issues have become top concerns for city residents and were dominant themes in her inaugural address.

Over the last decade, noted Breed in her speech, "We grappled with the twin troubles of homelessness and housing affordability. At the dawn of this new decade, they remain our greatest challenges. And they are what I want to talk about today."

Noting that her grandmother Comelia Brown left Texas for San Francisco seeking better job prospects, and that countless LGBT individuals and immigrants have also sought refuge in the city, Breed proclaimed it is her desire to lift up those now living on the city's streets.

"It is the hope of a dozen generations of my family. It is the promise that everyone has a place in this city. That no one should be left in the cold," said Breed. "So when we come to this Hall, or walk down Market Street, and see the suffering of thousands of people right outside our door, it hurts. It hurts — not because we are callous, but because we care. The suffering on our streets — it offends our civic soul. And it should."

Yet she also tempered expectations that her mayoral administration or individual cities would be able to easily solve the problem, noting that homelessness and rising housing costs are statewide and national epidemics.

"Homelessness isn't new. It isn't easy. We are not the only city struggling with it. And quite frankly, we are not going to solve it in a hundred days, or in a year, or even, entirely, in this term," said Breed.

In order to address the issue, Breed called for building "at least 50,000 new homes" by 2030, with 17,000 of those affordable, and for the city to continue to "permanently" preserve thousands of existing affordable homes. And she used her speech to call for passage of the controversial Senate Bill 50, authored by gay state Senator Scott Wiener (D-San Francisco), that would allow for high-density housing developments near transit centers.

This week Wiener amended his bill to allow for more local control over the design and placement of the projects, but it remains to be seen if state lawmakers will support it. Affordable housing advocates call it a gift to developers while some local officials worry it still negatively impedes their oversight.

Breed also pledged to increase the city's mental health services but was vague on how she plans to achieve that goal.

"I am determined, over the next four years, to create enough places to take in people with addiction or mental health problems, so that, when you encounter someone in need, you make a call and know that they will get help," said Breed.

Another top priority for Breed this year is naming a successor to planning director John Rahaim, a gay man who last year announced his desire to resign once a new person had been hired. Breed will also be working with the city's arts commission to hire a new cultural affairs director after Tom DeCaigny, a gay man who has held the post since 2012, announced last week that he was leaving to become executive director of the California Alliance for Arts Education in late February.

Both of the new department heads will play critical roles in implementing components of the city's pending LGBTQ cultural heritage strategy, which is expected to champion the GLBT Historical Society's plans to build a permanent LGBT museum somewhere in the Castro district. The archival group is working with Breed's administration to identify a potential site, hopefully by the end of the year.

After a draft version of the LGBTQ cultural heritage strategy was released in 2018, a final document has yet to be adopted due to mayoral staff working with numerous city departments to determine its various funding needs. Overall responsibility for the approved strategy will fall under the purview of Clair Farley, a senior mayoral adviser who is director of the city's Office of Transgender Initiatives.

She told the Bay Area Reporter this week that the strategy should be presented to various city oversight panels for approval this year. But the timeline for doing so, she added, remains unclear.

LGBT matters
It remains to be seen what specific impact the city's projected budget deficits will have on the funding required to implement the strategy, which encompasses everything from protecting the city's LGBT cultural legacy and historic neighborhoods to supporting LGBT-owned businesses and providing affordable housing to LGBT youth, seniors, artists, the transgender community, and others struggling to afford a home in San Francisco.

"I just think, for us, it is really important as these initiatives unfold we are looking to empower and be inclusive of the community," said Farley. "I am glad we were able to do an over $3 million increase in investment in the LGBT community in the last budget cycle. I know the mayor has made a commitment to continue to fund underserved communities, including the LGBT community, because there is a very large focus on equity within her goals."

Most of that funding approved in 2019 went toward the city's Our Trans Home SF program, which will be ramping up its efforts later this month. One of the agencies funded through the initiative, the St. James Infirmary health clinic for sex workers and others, will be opening the first transitional housing for transgender adults in San Francisco later this month.

It has leased two flats in a building where it plans to house eight individuals and hopes to lease an additional apartment in the coming months. Also, at noon, January 29, in the Koret Auditorium at the Main Library, the clinic and its partner, Larkin Street Youth Services, will be holding an orientation session for San Francisco's first rental subsidy program for trans and gender-nonconforming community.

As her office's responsibilities expand, Farley has brought on two additional employees to bring her staff up to five. Shane Zaldivar, who had been serving on the office's Transgender Advisory Committee, is now serving as its training coordinator. In her full-time position Zaldivar will support the office's LGBTQ inclusion training for staffers at city departments.

Pax Gethen has been hired on a part-time basis as the office's admin and communications assistant. They are often hired to photograph LGBT events in the city.

Her team this year, said Farley, will be "working to really kind of expand on the mayor's priorities of mental health and housing and overall stability for the community."

A key area of focus for her office will be the violence transgender people experience, as Farley said her team plans to hold community gatherings over the next six months to look at how the city can prioritize additional support and services to address the systemic issue.

"Our office and the mayor's office are wanting to look at the continued violence we are seeing against trans women of color and how to make sure we address that," said Farley.

Other items
Also on Breed's plate in 2020 will be working closely with the gay man she hired to oversee the San Francisco Municipal Transportation Agency and revamp its public transit system. Jeffrey Tumlin took over as the city's director of transportation last month.

In March, Breed is expected to help cut the ribbon on the new Eagle Plaza honoring the leather and LGBT communities under construction in the city's South of Market neighborhood. Last winter Breed helped push the project on 12th Street in front of the gay-owned Eagle bar through a number of bureaucratic hurdles in order for it to break ground.

As the B.A.R. reported online last month, the recent rainstorms have delayed the construction timeline for the public parklet. The roadway through the plaza and a rebuilt southern sidewalk should be unveiled later this month, with the rest of the project completed within two months.

In the spring Breed is also expected to celebrate the opening of a permanent installation honoring the city's first gay supervisor, Harvey Milk, inside the San Francisco International Airport terminal named after the pioneering LGBT icon.

And in early July Breed with help welcome health officials and advocates from around the world when San Francisco teams with Oakland to co-host the 2020 International AIDS Conference. The global event's coming to the Bay Area coincides with the city's goal of seeing new HIV infections be reduced by 90% this year. Breed and Dr. Grant Colfax, a gay man and HIV prevention expert the mayor hired to oversee the city's public health department, will be closely watched to see if they meet that target.