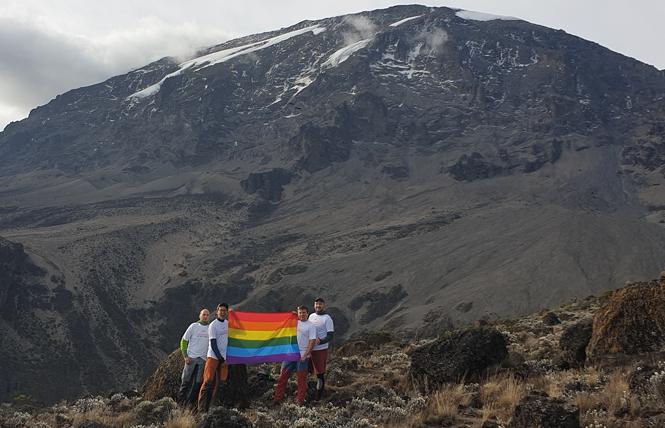 Kyrgyz gay activist Dastan "Danik" Kasmamytov is on a mission to plant a rainbow flag atop the world's Seven Summits to bring visibility for LGBT rights around the world.

Kasmamytov, 28, became one of the first openly gay people to come out and speak about LGBT life in Central Asia. He uses sports to create LGBT visibility in Eastern Europe and Central Asia.

He got the idea for his challenge, dubbed Pink Summits (http://pinksummits.com/en/) campaign, during his cycling trip from Asia to Europe.

Scaling the Seven Summits, the highest mountains on each continent, is a dangerous trek, made more challenging due to the fact that he plans to plant a rainbow flag at each summit, even in countries where its incredibly dangerous to be gay.

The Seven Summits are really nine summits, but due to two continents connecting, blurring the borders, such as in Europe and Asia and Oceania and Australia, it's numbered as seven, he explained.

"This is a very risky, hard thing to do for many people," he said, recalling the moment when a member of another group in front of his group was seriously injured when he fell off a ledge on Mount Elbrus in Southern Russia.

Kasmamytov, who has self-funded the climbs so far, has been joined by up to five different LGBT people on each trek.

He's also filming his experience and plans to create a documentary following his final ascent of the Seven Summits.

Kasmamytov has already ascended three mountains successfully: Elbrus and Kosciusko, in Australia in 2018, and Mount Kilimanjaro in Tanzania in 2019, he told the Bay Area Reporter.

Out in Central Asia
Kasmamytov came out to his family when he was 19 years old after studying in the United States.

Two years later, he participated in the Human Rights Watch report about police violence against gay and bisexual men in Kyrgyzstan. After the news conference on the results of this report, Kasmamytov said that he and other activists in Kyrgyzstan has faced violence and hate, including fatwa, a religious ruling passed by Kyrgyzstan's religious authority. The fatwa stated that gay men should be stoned to death, he said.

San Francisco Bay Area LGBT residents might remember Kasmamytov from 2013, when he spoke on a panel at the Oakland-based Global Forum on MSM and HIV representing Eastern European and Central Asian LGBT communities.

Not much has changed in his home country since he first started highlighting the lives of LGBT in Kyrgyzstan and in other Central Asian countries.

Homosexuality is socially unacceptable in Kyrgyzstan. The country's LGBT community continues to face discrimination and severe hostility in the Muslim-majority country, Kasmamytov said in a WhatsApp interview with the B.A.R. in November.

His coming out caused issues for his family back home, he said, but today his parents are proud of him and support other LGBT Kyrgyz.

Since then, Kasmamytov has made headlines accomplishing other firsts.

A sports enthusiast, he became the first openly gay Kyrgyz and Central Asian to cycle from Asia to Europe, becoming the first to have crossed the two continents by bike.

"I was already doing a lot of sports back then and I saw only mostly rich white men from Europe or America doing those crazy cycling tours across Asia," Kasmamytov said.

After the interview, he clarified: "Those people inspired me, but at the same time I felt like we were perceived as exotic culture[s] and countries that they wanted to explore or to cycle through. I was sad that my fellow countrymen did not have the same opportunity to explore the world. I wanted to change that."

He chose to cycle from where he was born and raised in Kyrgyzstan's capital, Bishkek, and ended in Germany's capital, Berlin, where he currently lives and works as a web developer.

"I was the first Kyrgyz to have ever done such a long cycling trip," he said.

During that challenge he learned about the Seven Summits. Already an avid mountaineer and rock climber, he immediately researched to see if anyone from his region had ever scaled Mount Everest or all of the Seven Summits, he said.

"There was no Central Asian who was on Everest or who has done all of the Seven Summits," Kasmamytov said.

This year he plans to scale Mount Blanc in the Alps of Europe in June and Mount Aconcagua in Argentina in December.

Most of the mountains he's scaled have been close to home, with the exception of Mount Kilimanjaro. As his journey continues, he will require more money as the mountains are farther away from his home and might require more gear and guidance, he said.

Climbing Elbrus, which is on the border of Georgia and Russia, he was questioned by the Russian secret service and his group was held at the border for several hours, he said. The mountain range is located in the most conservative part of Russia and isn't far from Chechnya, which has been rounding up and torturing suspected LGBT Chechens since the end of 2016.

While Kasmamytov was worried about the rainbow flag packed in his gear he was actually more concerned about the treacherous terrain of the mountain.

"I felt so proud, of course, of what I had done, what we achieved going up the mountain, but actually I was also proud of being there with the rainbow flag," he said about climbing Elbrus. "I was, of course, shivering [in] the cold, but also of the fear of what can happen in the next minutes or next hours. But then it was all OK."

He estimates that he's spent about $2,000 for each mountain he's climbed so far. The upcoming mountains are more costly. Everest, the most expensive mountain on the list, will cost at least $50,000, he said.

He anticipates the Seven Summits project to take up to seven years to complete due to funding limitations, he said.

Hate and inspiration
Setting out on the adventure he received many hate messages and threats. Some homophobic people walked out of a recent talk about Pink Summits in Kyrgyzstan and a crowd protesting him gathered outside of the venue, he said. The protesters had left by the end of the presentation and he was able to go home safely.

"Many of the mountains are, unfortunately, dangerous. There are always people every year dying doing the mountaineering. Unfortunately, it's a reality," he said. "But for me there is also additional risk for doing it for LGBT visibility."

He's inspired many LGBT people in Eastern Europe and Central Asia who have reached out to him for help, he said. He's connected LGBT people in the region to local organizations.

Through his mountaineering and network of queers in sports in his region he hopes to connect other queer sports travelers interested in trekking tours with local queer guides in Central Asia and Eastern Europe and provide a source of income to the local queer community.

Kasmamytov is even heading up his own guided adventures in Germany to help raise the money for Pink Summits.

For more information or to donate, visit http://pinksummits.com/en

Updated, 1/9/20: This article has been updated to include clarifying comments from Mr. Kasmamytov and a correction that homosexuality in Kyrgyzstan is socially unacceptable, not illegal.