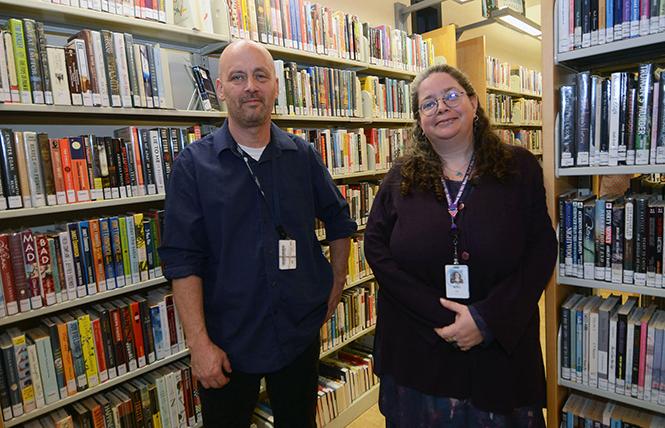 With San Francisco's Pride parade marking its golden anniversary in 2020, the city's library branch in the LGBT Castro district will be hosting a monthly program featuring LGBTQ artists and leaders. Dubbed the "Queer & Present" series, it will kick off in a couple of weeks with a performance by queer Oakland-based musician Blackberri, who uses only one name.

In February, the branch library will present an author talk with Toni Newman, a transgender woman who is executive director of the St. James Infirmary, a health clinic for sex workers in San Francisco, who penned the 2011 memoir "I Rise: The Transformation of Toni Newman." Other programs being planned will feature film screenings, poetry readings, LGBT history talks, and performances by LGBT groups.

"We already had strong LGBT programming we present at the branch, but we felt we wanted to improve on that with more programs. With the 50th anniversary of Pride, the timing is fantastic," said Casey Crumpacker, a straight ally who was named the acting branch manager last January.

Free for the public to attend the LGBTQ program series, its schedule will fluctuate based on the availability of the invited performers and speakers. It is in addition to the branch's ongoing book club that often reads LGBT titles and meets the first Sunday of the month from 3:30 to 4:30 p.m.

During Pride Month in June, the branch is looking to hold events each week leading up to the annual LGBT Pride parade and celebration set to take place the weekend of June 27 and 28. It will be marking 50 years since its launch in 1970, 12 months after the uprising against police oppression at the Manhattan gay bar the Stonewall Inn.

Janine deManda, a librarian at the branch who was hired by the city's public library system in May 2018, came up with the name for the LGBTQ program series. She is working with fellow adult services librarian Jennifer Bowman on the lineup of performers and presenters taking part in it.

"The library branch is a resource for everyone, but ideally it should be responsive to the people in the neighborhood served by the branch," said deManda, who is bisexual and also works part-time at the Oakland Public Library system.

Officially known as the Eureka Valley/Harvey Milk Memorial Branch Library, the outpost of the city's public library system has long had strong ties to the LGBT neighborhood it calls home. It is named in honor of the city's first gay supervisor, whose life and political tenure was tragically cut short by an assassin's bullet the morning of November 27, 1978.

The block of 16th Street between Pond and Prosper streets where the library is situated was renamed by the city after José Julio Sarria, a drag queen and gay man who was the first out LGBT person to run for political office when he sought a supervisor seat in 1961. The library branch's address is 1 José Sarria Court.

It also houses a special LGBT book collection that numbers more than 1,000 titles. It is the only branch in the city's library system that features such a collection.

"Our LGBT special collection is one of the largest at a branch library in the country," said Crumpacker, who was first hired by the city's library system in February 2016 as a part-time adult services librarian at the Castro branch.

The branch is also looking to launch several other LGBTQ-related events and ongoing programs, noted deManda. It is aiming to host an event marking the International Transgender Day of Visibility, held annually March 31. Under discussion, added deManda, is offering a program for LGBTQ seniors interested in writing and a book club for teens and transitional age youth focused specifically on young adult LGBTQIAA+ authors/books.

The Castro branch is offering three quarterly program series in 2020. Its "Books & Bites" program will focus on the foods featured in books, with the first event featuring culinary samples from the Harry Potter series. It will take place from 3 to 4 p.m. Saturday, January 11.

"Costumes are OK," noted deManda, who said participants would be able to taste such culinary delights as scones and a special pumpkin juice brew.

The foods mentioned in "The Lord of the Rings" will be the focus of the July program and those in "The Godfather" in October. The April program will center on food cited in "Tales of the City" by gay author and former Castro resident Armistead Maupin, who now resides in London.

"We will have pizza from the Sausage Factory because characters go there in the book," said deManda, referring to the Italian restaurant that has long been a mainstay on Castro Street.

The branch's second quarterly series is called "Accessibility at the Library" and is meant to highlight how people with various disabilities can find help in accessing the library system. Taking place in February, May, August, and November, the programs will feature how to digitally access the library's holdings, its Talking Books and Braille Center, its deaf services center, and its library by mail option, said deManda.

The third quarterly series is called "Creative Arts" and will be an instructional program that can be expanded into a four-week session if patron interest demands it. Drawing will be the focus in March, creative writing in June, yarn arts in September, and creative upcycling in December.

The city's library system plans to debut a new website in January and is reminding users it no longer charges late fees and has canceled the fines that had been imposed in the past. Those looking for personal assistance on researching a topic can sign up for a 30-minute to a hourlong session with a librarian at the Castro branch library from 3:30 to 4:30 p.m. the second and fourth Sunday of the month.

To do so, or to sign up for the branch's monthly newsletter about its special events and ongoing programs, visit https://sfpl.org/?pg=0100002301