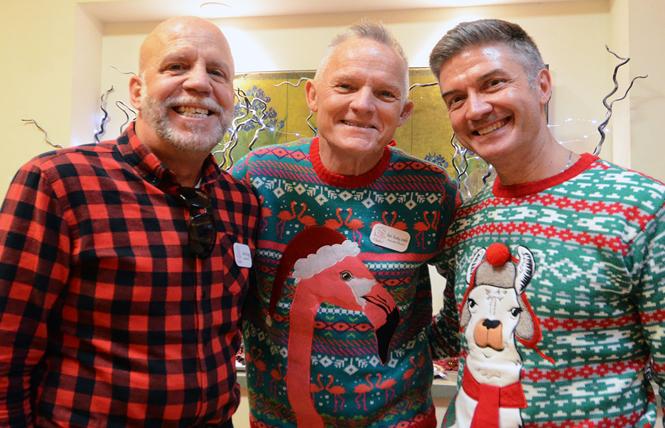 As the agency's executive director explained in an email to supporters, Maitri has changed its admission guidelines as the city's housing crisis "has proved detrimental to access to care among those diagnosed with HIV/AIDS."

"We are changing because the people who need our services and the kind of services they need are changing," wrote the Reverend Rusty Smith, a gay man who in July became the agency's fifth executive director in about four years.

Smith described his tenure so far as "busy, challenging, awakening, inspiring, transformational, exhausting, and totally worth it" in an email to the Bay Area Reporter December 19.

In the email to supporters, Smith noted that in recent years, "the majority of residents at Maitri come for short-term stabilization with the goal of stabilizing their health and returning to the community."

That's different from when people used to go to Maitri for 24-hour end-of-life care. The agency, founded in 1987, has served as the "the final home for more than 1,600 people" with AIDS since then, according to its website.

But as HIV infection became a more manageable disease with the advent of antiretrovirals in the mid-1990s, the face of AIDS has changed, Smith said.

"I did not fully realize or understand how many people no longer recognize the impact of AIDS on our community," Smith told the B.A.R., when asked what challenges he didn't anticipate when he started in his role. "Things are much better now, but HIV/AIDS has not gone away and even as the face of AIDS is changing, the need for services and support remain critical."

He said that he is trying to help the nonprofit adapt to the changing needs of the epidemic, which include transgender medical support services.

Indeed, statistics show that transgender people are disproportionately affected by HIV infection, an issue that compounds with race and ethnicity. Nationally, Centers for Disease Control and Prevention data from this year shows that an estimated 14% of transgender women have HIV, with as many as 44% of black and African-American transgender women living with HIV.

As San Francisco has reduced the number of new HIV transmission cases, those living with the disease are increasingly 55 years or older. Many never expected to live this long, and, as the B.A.R. has previously reported, few are financially prepared to deal with end-of-life issues and are also worried about losing their housing and ending up on the street.

According to a 2019 National Vital Statistics Report from the CDC, 5,698 deaths in the United States were attributable to HIV infection or AIDS in 2017, the last year for which statistics are available.

While this is a decline from 1995's high of 41,699 deaths, most deaths due to HIV infection or AIDS in the U.S. today are of people who can't access consistent health care or are experiencing homelessness or mental health problems.

Smith, who is also an Anglican priest, said that he considers his work at Maitri to be "my full-time ministry and job."

"My church is the mission of Maitri: 'no one should have to suffer or die alone,' and my faith community are the people that come to our doors in need of help and services," Smith said.

Smith said he could not point to a particular moment since he started the job as his proudest, but gave a few examples that filled him with "overwhelming gratitude," including providing "medical support for a HIV-positive transgender resident as she completed an important medical step in her journey of becoming her most true self" and "welcoming a resident struggling with addiction, AIDS and the exhaustion of living on the streets and helping him regain his health and find his way home."

In the email to supporters, Smith pointed out that Maitri wants to remind community providers that it accepts clients for short-term stabilization who are homeless. It also noted that most recent residents admitted to the hospice have been triply-diagnosed: "HIV/AIDS-positive, with history or current substance use disorder, and history or current psychiatric/mental health disorder."

"It is imperative that we now take into account a 'new' diagnosis of chronic homelessness, a category that a majority of incoming residents fall under," the email stated.

Crystal Russell, who serves as program director for Maitri, told the B.A.R. December 19 that Smith has "done a tremendous job of motivating and connecting staff, encouraging culturally competent and sensitive training, and supporting both professional and personal growth."

"He has also been a compassionate support for our residents and their families, demonstrating to our staff and volunteers exactly what he means when he speaks to his strong belief in 'servant leadership,'" she added.

Russell said that Smith took over "at a very interesting time" for the organization, adding that while Maitri prioritizes end-of-life care, it has been taking in a lot of people affected by the housing crisis.

"Our social work case managers are tasked with the difficult challenge of assisting their clients with navigating the complicated housing system in the City and County of San Francisco," Russell said.

Maitri has an annual budget of $2.7 million, according to its website. Seventy-seven percent of its revenue is from government support, 9% is from corporate and foundation grants, 9% is from events, and 3% is from fees associated with its programs.