Editorial: Pelosi's our person of the year 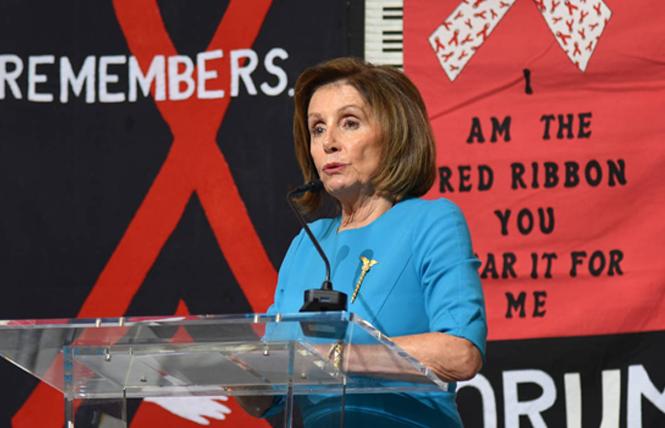 House Speaker Nancy Pelosi talked about the return of the AIDS Memorial Quilt to its original home in the San Francisco Bay Area during an announcement November 20 at the Library of Congress. Photo: Courtesy Mike Shriver/National AIDS Memorial Grove

House Speaker Nancy Pelosi is a woman you want on your side — and during 2019, the San Francisco Democrat steadfastly stood with the LGBTQ community as we continued to endure a hostile presidential administration obsessed with taking back rights that we fought long and hard for. Pelosi will continue to be a voice for equality and fairness, exemplified by the skillful way she managed last week's impeachment of President Donald Trump. Long resistant to moving forward on impeachment, she was prompted by a whistleblower's complaint about Trump's phone call with the president of Ukraine in which he asked for that country to investigate his political rivals and exerted pressure by withholding financial aid and a coveted White House meeting. Trump is only the third president to be impeached. While an eventual Senate trial likely will result in Trump's acquittal, the House vote will be a permanent mark of his abuse of power and the contempt of Congress — two articles the House voted on.

Pelosi has been under pressure from restless House Democrats who wanted impeachment since she took back the speaker's gavel last January. Despite this, she found time to accomplish other important legislation benefitting the LGBTQ community as well as helping successfully negotiate the return of the Names Project AIDS Quilt to its rightful home in the San Francisco Bay Area.

Winning the midterms
This year's Democratic control of the House started just over a year ago when the party rode a blue wave in the midterm elections, capturing a majority of seats and installing Pelosi for a second stint as speaker (she previously served in that role from 2007 to 2011). During the campaigns, Pelosi raised money and helped elect Democrats to Congress from districts all over the country, including those where Trump won in 2016. Election night victories resulted in the most diverse incoming class of freshmen lawmakers ever, even growing the number of LGBTQ members to 10 (that was reduced to nine in late October when bi Congresswoman Katie Hill, D-California, resigned).

Equality Act
That net gain of 41 seats gave House Democrats a solid majority to pass legislation, which they've been busily doing. On May 17, the House approved the Equality Act, legislation that would protect LGBTQ people from discrimination throughout daily life. The bipartisan vote was 236-173, and it marked the first time a chamber of Congress had approved a comprehensive LGBTQ rights bill. The Human Rights Campaign and other LGBTQ groups had tried for decades without success to get the Employment Non-Discrimination Act passed, until lawmakers tried a different tact. One of the sponsors was gay Congressman David Cicilline (D-Rhode Island), who noted that the Equality Act would amend the 1964 Civil Rights Act to extend protections to sexual orientation and gender identity. So, rather than attempt a standalone bill, congressional Democrats determined that a better solution would be an amendment to existing law. The Civil Rights Act ended segregation in public places and banned employment discrimination on the basis of race, color, religion, sex or national origin.

As we reported at the time, Pelosi made passage of the Equality Act a priority once she returned to the speakership. It was rolled out in short order, and was supported by eight Republicans, according to Gay City News. "Fifty years after LGBTQ Americans took to the streets outside of New York's Stonewall Inn to fight against harassment and hate, we take pride in the progress we have forged together," Pelosi stated after the vote. "Our founders, in their great wisdom, wrote in our beautiful preamble — wrote of the blessings of liberty, which were to be the birthright of all Americans."

We know the Republican-controlled Senate won't take up the Equality Act anytime soon — heck, it doesn't even want to conduct a fair trial on Trump's impeachment, thanks to Majority Leader Mitch McConnell — but the importance of the act passing the House should not be overlooked. And it should motivate LGBTQ and straight voters alike to do all they can to flip the Senate to the Democrats come November 2020. McConnell himself is on the ballot in Kentucky, which shocked the country when voters there elected a Democratic governor in an off-year election last month. He has a couple of challengers and an upset would be sweet revenge for all the cynical games he's played to stymie fair-minded legislation and push through ultra-conservative federal judges.

AIDS quilt
The return of the AIDS quilt to the Bay Area — all 50,000 panels — was one of our major news articles this year. The panels are now under the stewardship of the National AIDS Memorial Grove and are in the process of moving from Atlanta to a storage facility in San Leandro after the Names Project, the quilt's parent agency, determined it could no longer shoulder the responsibility. Pelosi, a longtime supporter of the AIDS grove who helped secure its designation as the country's only national AIDS memorial, played a behind-the-scenes role in facilitating the agreement, working with Representatives John Lewis (D-Georgia) and Barbara Lee (D-Oakland). When the accord was announced at a November event at the Library of Congress, Pelosi spoke about the quilt's history, acknowledging co-founders Cleve Jones, Mike Smith, and Gert McMullin. (The quilt's archives will move to the Library of Congress.)

Having the grove assume stewardship of the quilt means that panels will be on display in San Francisco. They could be part of any LGBTQ museum or center that the GLBT Historical Society and the grove are working on, respectively. The grove will continue the Names Project's educational programs such as loaning panels to schools and community events. Pelosi and the others involved recognize the quilt's historical importance, which is why she was able to bring everyone together.

We have no doubt that 2020 will be a challenging year politically. Defeating Trump must be a priority. San Francisco residents can take comfort that Pelosi will once again be leading the charge to keep her majority in the House. It's the only check on the president we have right now.