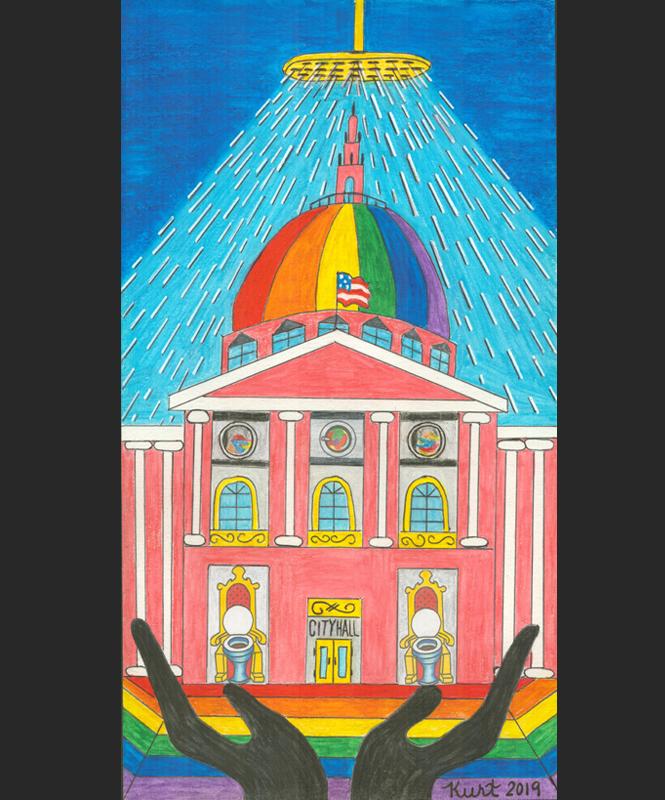 The plight of those living on the streets inspired this year's op-art submission by San Francisco-based artist Kurt Schwartzmann, a gay man who was homeless for six months in 2007. A pastry chef for two decades, Schwartzmann's life unraveled due to methamphetamine.

"I found myself sitting on the curb one day, looked up, and asked, 'My God, what happened?'" recalled Schwartzmann, 55, during a recent interview.

At night he would sleep by a stairway in Diamond Heights or ride a Muni late-night bus route. He still recalls the kindness a female bus driver offered him one night at 3 a.m. near City College of San Francisco.

"I had no money, but she said, 'Get on, you can keep me company.' It is horrible to have no money and be at the mercy of the elements," said Schwartzmann, who has tried in vain to locate the driver to thank her. "I was touched by her humanity."

Eventually, he took refuge at a South of Market shelter, first sleeping on a metal chair then a cot. A boyfriend he met at Pride in 2007 had him move in after learning Schwartzmann was homeless.

"His place was in Twin Peaks, and from the balcony I could see the shelter where I had stayed at," recalled Schwartzmann, now clean of meth for 10 years.

A year later Schwartzmann met the man he would marry. At his suggestion, Schwartzmann took a printmaking class at City College thinking he could design their wedding invitations.

He discovered being blind in his left eye due to CMV retinitis, an HIV-related opportunistic infection, didn't hinder his artistic abilities. One art series he created was a tribute to Muni operators. It was featured in the Bay Area Reporter's Seeing in the Dark column last January.

His exclusive drawing for the B.A.R., "Sutro Suds & Showers," features a showerhead raining water down on City Hall whose facade features washing machines and toilets. It highlights the need for such amenities to be offered free of charge to unhoused individuals.

It's also an homage to Adolph Sutro, mayor of San Francisco from 1895 to 1897, as he opened his estate to the public and was known for generous acts of public benefit, like the Sutro Baths he constructed near the ocean, explained Schwartzmann.

"I often hear people and news reports speak of how filthy the streets of San Francisco are. This really disturbs me as I was homeless once, and I understand that nobody wants to use the street for a toilet," he said.