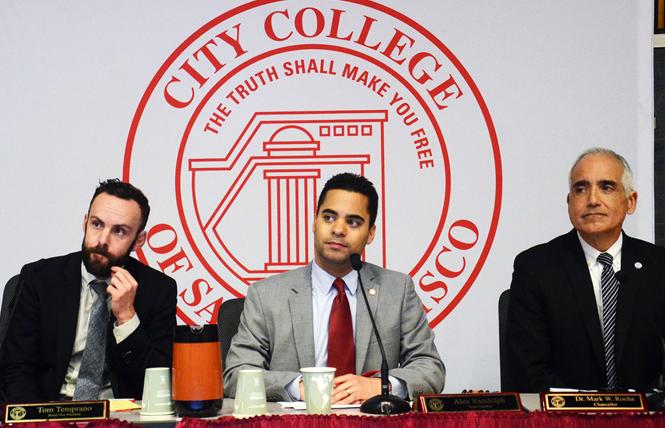 A proposed new gender diversity and inclusion policy that would expand existing protections was officially presented to the San Francisco Community College District Board of Trustees — which oversees City College of San Francisco — at its meeting Thursday, December 12.

The proposal is aimed at offering protections for transgender people and allows a formal complaint process for those who believe they were mistreated, according to a copy of the proposal.

The trustees are expected to vote on the policy at their January meeting; last week's item was the first reading.

Alex Randolph, a gay man who is the president of the board of trustees, signaled his support for the policy change.

"As someone who struggled with thoughts of suicide as a little boy and was teased for playing with Barbies, it's more than an updated policy — it's giving something we weren't able to have," Randolph said. "Even as president of [the] City College [board], I was told to 'butch it up' and wave my queer flag less loudly. That is not OK."

The policy proposal would make the use of chosen names mandatory except for certain financial and legal documents. It also would make it against school policy to willfully misgender people, and also protects two-spirit-identified students and faculty, according to a copy of the proposal.

People will be able to make complaints with the district, via either a formal or informal process, according to a copy of the proposal, and those objections would go through the normative process for discrimination complaints.

The proposal comes after the implementation of a chosen name system and gender-neutral bathrooms, which were spearheaded by the City College Queer and Trans Inclusion Project, or QTIP, according to Tom Temprano, a gay man who is the vice president of the board.

The chosen name changes were previously reported in the Bay Area Reporter in April 2018. Under that policy, trans students at the school are able to have their preferred names appear on class rosters, emails, and for online courses. The policy was officially implemented in February 2018 by the city's Office of Transgender Initiatives, which collaborated with City College students, staff, and its chancellor, Mark Rocha.

Temprano said that the new, broader policy is necessary due to ongoing harassment of trans and gender-nonconforming people at City College — which he said may surprise some people given San Francisco's reputation as a welcoming environment.

"There was a student who was dead-named in the library system. I've heard of students being subject to transphobic discussions while in class. I've heard faculty members whose legal names were shared widely with colleagues during department chair elections. I've seen photos of defaced gender-neutral bathroom signs at a number of our campuses. This is not the safe space that City College ought to be," he added.

Posting paper signage on top of the gender-neutral restroom signage, for example, will not be allowed under the policy, if it is adopted, according to Temprano.

"Despite the hard work of many people at this college to make this college a safe space where transgender people can live and work, we still have a way to go," Temprano said.

Jesse Kolber, a sociologist with City College, is a transgender man who is part of QTIP at the school.

"This is a great step for City College and it's a necessary step," Kolber said at the meeting. "We have to ensure our commitment to battling transphobia and cisism where it exists in our society."

Kolber joined other members of the project — Jennifer Carlin, who identifies as bigender and queer and is the chair of the behavioral studies department at City College, and Pau Crego, a trans person who is director of policy and programs at the city's Office of Transgender Initiatives — in helping to write the proposal.

The college has been working toward the new policy for two years, but things have ramped up in the past three to four months, according to Crego.

Carlin said that "part of my ability to be more out is because of the work of people much younger than I am," but that she can't say things have dramatically improved since the 1980s.

"I was closeted because of lack of acceptance," Carlin said. "What I grieve about is that what I faced as a young person who was closeted I am still seeing our students face today."

The proposal will be voted on at the next board of trustees meeting Thursday, January 23, at 5 p.m. in Room 101 of Conlan Hall at the City College of San Francisco's Ocean campus at 50 Frida Kahlo Way.