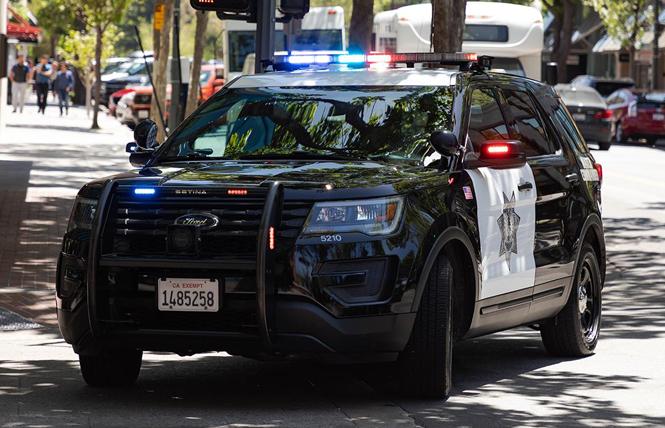 The city of Palo Alto recently settled a lawsuit filed by a gay Latino man for $572,000. Photo: Courtesy Reddit

Palo Alto City Council members have unanimously approved more than a half-million-dollar payout to a gay Latino man settling a claim of police brutality and homophobia.

The settlement, which the council voted on November 18, was to resolve a federal lawsuit filed by the man, Gustavo Alvarez. Attorney Cody Salfen of the Salfen Law Group filed the suit April 29.

As part of the settlement, the city's police department will have to undergo LGBT sensitivity training, City Manager Ed Shikada stated in a November 20 news release announcing the $572,000 payout to Alvarez.

Retired Palo Alto Police Sergeant Wayne Benitez was also ordered to write a public letter of apology to Alvarez as part of the settlement.

"The city believes that this resolution is in the best interests of all involved — including the police department, its police officers, and Mr. Alvarez," Shikada stated in the release.

Alvarez's lawsuit had sought $10 million in damages, according to the federal complaint obtained by the Bay Area Reporter.

The arrest
According to the federal complaint, Alvarez, for whom Salfen didn't provide an age, was brutalized by Benitez, who was training an estimated seven other police officers who participated in Alvarez's arrest outside of his family's mobile home in Palo Alto's Buena Vista Mobile Home Park on February 17, 2018.

Palo Alto is one of the San Francisco Bay Area's most affluent cities and home to the elite Stanford University.

Alvarez's home security cameras captured the violent incident where Benitez is seen punching him and slamming his head into the windshield and hood of the car, causing him to bleed and a tooth to come loose. Soon after he became disoriented and his speech started slurring, according to the complaint.

Alvarez clearly informed the officers they were on camera.

Other officers on the scene didn't attempt to stop Benitez. They did not report the excessive use of force or call for medical assistance, the complaint says. Salfen released the video (www.youtube.com/watch?v=dtuIzpMohyA) to the media in July.

Alvarez does have a criminal record that includes convictions for grand theft, driving under the influence, and burglary, but he claims he's endured years of harassment by members of the Palo Alto Police Department.

He told NBC News that's why he put up the cameras two years ago.

Alvarez has lived in the mobile home with his family since 1997 when they moved to the United States from Mexico, he told the station in an exclusive interview in July.

The B.A.R. requested to speak with Alvarez, but Salfen said that he wasn't available for an interview.

Salfen claimed in the complaint that the police unlawfully arrested and detained Alvarez for two weeks in Santa Clara County Jail without probable cause.

Benitez also mocked Alvarez for being gay, poor, and called him a lowlife during a debriefing of the arrest that was captured on an audio recording from the officers' microphones on their uniforms they were wearing the night of the incident.

Retired Santa Clara County Superior Court Judge LaDoris Cordell, who's a lesbian and a former independent auditor for the San Jose Police Department, said in an interview that she was disappointed by the conduct of the sergeant, who knew he was being recorded.

"There was no hidden camera here," said Cordell.

"Given that he felt confident enough to be racist, to be homophobic, to use excessive force and believe that there were going to be no repercussions ... that's really shocking," said Cordell, who noted that Benitez was training other officers. "They were learning from him, which made this even worse."

Cordell said that she did not hear another officer telling Benitez to stop using the homophobic language.

"Nobody's speaking up, so they are all buying into it," she continued, stating that officers are required to report misconduct of other officers. "As far as I know, none of the other officers there stepped up."

False reports
According to the complaint, in reports and court hearings the officers failed to state the use of force and altered their reasoning for, and accounts of, Alvarez's arrest. They omitted and mischaracterized key facts in their testimony, the complaint stated.

The officers' accounts of Alvarez's arrest differed widely from the video captured on the camera and audio from the officers' microphones on their uniforms.

Patrol cars are equipped with five different in-car cameras. However, during the incident they were all pointed away from the scene and therefore couldn't sync up with the microphones to provide alternative perspectives of Alvarez's arrest, according to the complaint.

The Palo Alto Police Department is conducting an internal investigation, according to the city manager's release.

Cordell and Salfen have questions about the department dragging its feet on the internal investigation, which hasn't reached the Santa Clara County District Attorney's office.

"It does not take almost a year to investigate this," said Cordell. "We all saw the video. Do they think that we are going to forget about it? Well, we are not going to forget."

In addition to the federal complaint that was resolved with the payout to Alvarez, there's an ongoing criminal case, Sean Webby, the DA's public communications officer, told the B.A.R.

Law enforcement officials couldn't comment further due to the cases being under investigation.

She has yet to receive a response from the city, she told the B.A.R. December 9.

"It's a department that has a problem," Salfen told the B.A.R., saying that the problems are "top-down" and "department-wide."

Instead, city officials and police officials are standing behind the officers.

"They are all complicit," said Cordell. "The blue wall came together. These officers either lied blatantly or lied by omission."

The DA's office declined to prosecute Alvarez on all four misdemeanor charges brought by the police officers from the arrest due to lack of evidence.

Palo Alto city officials and officers "sharply dispute" a majority of Alvarez's claims and question his "continuing criminal behavior," according to the city manager's release.

"The city is still not accepting full responsibility," said Cordell. "Their rhetoric has been to downplay the misconduct of the officers and to point fingers at Alvarez.

"There is a lot more that this city needs to do, and the chief of police needs to do," she added. "They all need to step up and do the right thing here and I don't see that happening."

The Palo Alto Police Department is trying to "deflect" the "spotlight" from "their own criminal conduct" that went far beyond an excessive force case covering the "whole gamut of civil rights violations," said Salfen.

Benitez retired with a full pension — earning him a package of about $118,600, according to the California Public Employees' Retirement System — after being put on administrative leave after the incident, reported NBC News. He is now allowed to work at another law enforcement agency, said Cordell.

Another officer has since left the department.

Transparency needed
Transparency is what the department needs, along with extensive cultural sensitivity training, Cordell and Salfen believe.

The city manager's release said that an officer will complete an online course that starts next month at the Napa Valley College Criminal Justice Training Center. The course covers LGBT awareness for law enforcement.

The unnamed officer who will take the course is expected to train other officers upon completion, according to the release.

"That's ridiculous. That's absolutely absurd. That's not how you do a training," said Cordell, who also doesn't understand why the department didn't tap into the county's own LGBT resources and LGBT law enforcement trainings already in place.

In a follow-up email, Meghan Horrigan-Taylor, Palo Alto's chief communications officer wrote that mandatory LGBT sensitivity training for officers is a new law as of this year. The course in Napa happened to be the first available Peace Officer Standards and Training-certified course following the settlement.

She reiterated that the training is a new addition to other similar community sensitivity trainings. The course will be extended to all sworn personnel in January 2020.

Maribel Martinez, a queer woman who's the director of the Santa Clara County Office of LGBTQ Affairs, has been following the case closely. She expressed her disappointment that "police departments wait until there is a conflict or issue that escalates and then have to settle and mandate training."

However, she was also hopeful that Alvarez's case could be a teachable moment.

"I feel that many law enforcement agencies can learn from this and be proactive in training their force," she said, praising the Napa police officer LGBT sensitivity training course and its forthcoming Out to Protect conference in April.

"We encourage all law enforcement in the area to attend this wonderful training," said Martinez, noting that the conference is attracting experts from all over the country.

Alvarez, who still lives in Palo Alto, continues to suffer from the after-effects from the incident, his attorney said.

Salfen hopes that Alvarez will be able to leave Palo Alto at some point, but noted that his departure won't resolve the city and police department's issues.

"Gustavo leaving that city, that's not going to change the police department," he said, adding that some citizens are afraid to call the police when real crimes are happening because they fear they will be targeted. "There are plenty of other similarly situated citizens who are just going to be the next victim of this agency until the agency is reformed."

"I'm very worried about any other people who look like Alvarez or who look like me who might have an interaction with these officers," she said.