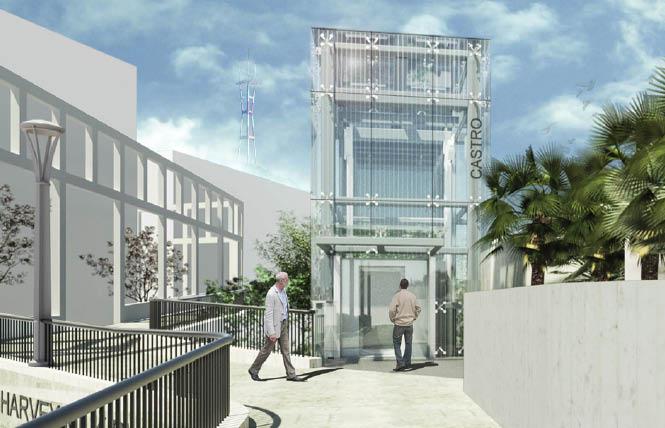 A rendering of the proposed elevator for Harvey Milk Plaza that will improve access to the Castro Muni Station below. Photo: Courtesy DPW

City officials have refined the design for a new elevator to be built at Harvey Milk Plaza in the LGBT Castro district that will provide access to the Castro Muni Station below. While the glass structure will include space for a fourth stop providing direct access to Market Street, it is slated to open with only three stops due to funding constraints.

As the Bay Area Reporter has noted in previous stories, Castro residents and community leaders have demanded that the fourth elevator stop be included in the $9 million project, now "likely" to break ground in the fall of 2020 and take upward of 18 months to complete, according to a spokeswoman for San Francisco Public Works.

The agency is working with the San Francisco Municipal Transportation Agency on the design for the elevator. The project is moving forward on its own timeline separate from that of the community-led effort to completely revamp the plaza, as there is no funding for that project's estimated $11 million price tag.

The elevator project is being designed with the larger plaza overhaul plans in mind. Its construction will result in some cosmetic changes to the plaza, mostly in a sunken terraced portion that is currently fenced off and inaccessible to the public.

The see-through elevator bank will be built within it, with a street-level stop accessed directly from Castro Street via a walkway connecting the elevator stop to the existing pathway that snakes through the public parklet. A second elevator stop will be located at the entry-level into the Castro Muni Station, and a third stop will provide access to the inbound platform level.

Incorporated into the elevator project are replacements of the lighting fixtures and paving in the plaza, as well as widening a segment of the sidewalk fronting Market Street headed toward Collingwood Street. The Board of Supervisors, sitting Tuesday (December 10) as the San Francisco County Transportation Authority, approved $1.5 million in funding for the design work of the elevator from the Prop K half-cent sales tax for transit projects.

"This project is an accessibility upgrade to the station," said Teresa Kavanagh, a project manager with the SFMTA capital programs and construction division. "It will help numerous folks with all different mobility issues to access the station. Folks have been waiting years for that second elevator, so it is a matter of urgency to get it built."

According to the latest plans for the elevator, it is being designed in order to minimize the structure's footprint but provide clear sightlines into the elevator cabin. Thus, it is expected to use clear glass and feature translucent etched patterns that create "a beacon of light."

The feature will help address safety issues at night by making the elevator easy to locate and provide visibility into its interior, explained Jane Chan, a project engineer with DPW.

"We want to make it glow like a lantern but with a soft glow," said Chan.

A concourse area in front of the stop at the Muni station entrance would include "seatwalls" or wood benches mounted to the wall defining what the project architect refers to as a "garden room." The terraced planters behind the elevator would be replanted with drought tolerant species of "swaying plants" and agaves.

The existing brick pavers would be replaced with a non-slip terrazzo-style aggregate concrete in order to deal with drainage issues. New fencing would be installed in the area and a damaged commemorative bench would be replaced.

"This project will improve access to public transit, and will also include an accessible path from the southwest corner of Market and Castro streets to the Harvey Milk Plaza-level entrance, ensuring all riders can access Muni in the Castro," stated gay District 8 Supervisor Rafael Mandelman, who represents the Castro at City Hall.

Plaza project
In September 1985 city leaders dedicated the plaza above the then 5-year-old Castro Muni Station after the city's first gay supervisor. Milk was assassinated in November 1978 along with then-mayor George Moscone.

The station and plaza serve as the de facto entrance into San Francisco's gayborhood, which Milk represented at City Hall and called home, as it was where he opened his Castro Camera store. To create a more meaningful tribute to Milk, the group Friends of Harvey Milk Plaza has been pushing a major overhaul of the area that would see the sunken public parklet be brought to street level with an artistic canopy covering for a reconfigured stairwell entrance into the Muni station.

A design competition resulted in a plan that has been significantly reduced in scope as it works its way through the city design review process. The plaza group has pledged to raise at least $10 million in private donations for the project, whose exact cost is yet to be determined.

In addition to funding its plaza redesign proposal, the friends group has been told by the city that it needs to determine a funding source to pay for building the access path from Market Street to the elevator's fourth stop. The current plans call for an elevator with doors that will be able to open on the backside of the shaft where a walkway could be built to connect it to the sidewalk on Market Street.

But, as Kavanagh stressed in an interview, "We are not building the fourth elevator stop access platform" as part of the elevator project. It could either be incorporated into the friends group's plans for the plaza, she said, or be pursued as its own project if funding can be secured and the larger plaza revamp "does not materialize."

A vociferous group of detractors of the plaza overhaul proposal has been calling for a more miniscule upgrade to the parklet to address the accessibility concerns and lackluster landscaping it currently sports. A chief critic of the redesign proposal is the plaza's original architect, Howard Grant, a gay man who also expressed concerns about the elevator design.

"Regrettably the SFMTA team has been nonresponsive when it has come to suggestions about making the elevator structure compatible with the station architecture," Grant told the B.A.R. "They polled the community about the various steel and glass curtain wall enclosures but ignored its shape! Curves are a main feature of the station and the old B of A building, but their solution is an awkward rectilinear tower in my opinion."

The MTA is planning to hold community meetings in early 2020 about the elevator design. The city's arts commission is expected to have a final vote on the proposal next spring, while the engineering division for the regional transit agency BART must also review the project since it owns the station.

To learn more about the elevator project for the plaza, the SFMTA has created a website for it at https://www.sfmta.com/projects/castro-station-accessibility-improvements-project

UPDATED 12/10/2019 with the city approval of funds for the design work of the elevator and a comment from Supervisor Mandelman.