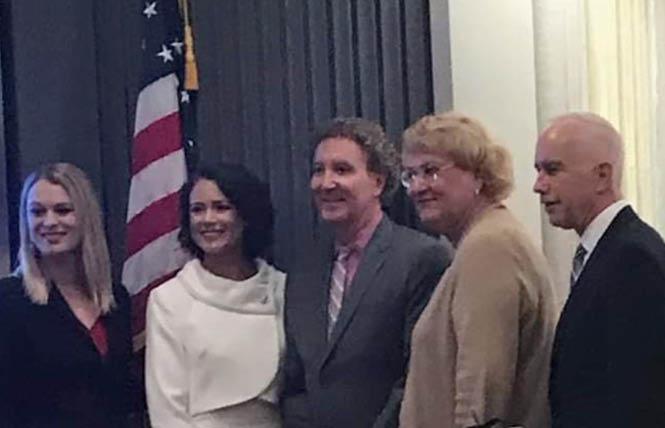 Two years ago Holstege, at the age of 31, became the youngest woman elected to a council seat in the LGBT retirement and tourist mecca. Her election and that of Councilwoman Lisa Middleton, the first transgender person elected to a non-judicial office in the Golden State, ushered in the first all-LGBT city council in Palm Springs.

It means Holstege is poised to become mayor in December 2020 if she wins re-election to the City Council next fall. Holstege is running for a full four-year term for the newly created District 4 council seat on the November ballot.

In order to head off being sued by groups who had argued that Palm Springs' citywide elections for its four council seats and a mayor impeded minorities from being elected to the five positions, the council converted to a district-based system and scrapped having an elected mayor. The mayor now rotates among the five council members elected by district.

Kors, who had been serving as mayor pro tem this past year, took his oath of office as mayor Wednesday. Also sworn in that night were newly elected District 2 City Councilman Dennis Woods, a gay man who had chaired the city's planning body, and District 1 City Councilwoman Grace Elena Garner, a former planning commissioner who is now the first Latina to serve on the council.

It marked another first for Holstege, as she is now part of the first female majority on the city council along with Middleton and Garner. Middleton pulled papers in mid-November to seek the new District 5 council seat next fall, while she is also considering a run for the vacant 28th state Senate District seat.

Republican Jeff Stone resigned last month to take a job with the federal Department of Labor. Among those who have already announced plans to seek his seat is lesbian aging policy expert Joy Silver, who narrowly lost to Stone in 2018.

There had been speculation that Holstege would also enter the special election for Stone's seat on the March 3 primary. But Holstege made clear this week her desire to remain on the city council in a December 5 Facebook post.

In it she applauded Garner, whom she had endorsed, for making her first comments as a councilwoman "in Spanish, in a city council chamber that should have been accessible and bilingual a long time ago."

Holstege added she was honored by her appointment as mayor pro tem, "and I'm looking forward to my term as mayor next year if re-elected by the voters of Palm Springs in 2020," which she noted would be historic.

"We have still have NEVER had a female mayor of the City of Palm Springs in our 80-year history," wrote Holstege. "We have so much further to go, but we have made incredible progress in a short amount of time."

As for Kors, who early on ruled out a run for the state Senate seat, he hailed the results of the recent council races in an emailed letter to constituents ahead of his taking over the mayoral gavel. He noted that moving to district-based council races had proved to be a success in electing candidates with governmental experience.

"Concerns that moving to district elections might result in unqualified candidates being elected with just a handful of votes and that the election would not increase diversity on the council proved to be unfounded," wrote Kors. "Voters elected two new, highly qualified individuals, with differing skill sets, including the first Latina in the city's more than 80-year history."

He listed his main priorities as mayor in the order of homelessness, jobs, and the environment. Kors noted that Governor Gavin Newsom had allocated $10 million to Palm Springs to address homelessness, funding that he, Holstege and Assemblyman Chad Mayes, who this month left the Republican Party to register as an independent, had advocated for.

"We were the only city other than the largest 13 in the state to receive such funding," wrote Kors, adding that the council "will, after holding public meetings, finalize a plan to utilize this funding."

He also vowed to adopt a Community Workforce Agreement by June that would require the proponents of all construction projects receiving substantial city funding to prioritize the hiring of residents of Palm Springs.

"This will enable more of our residents to earn salaries that will allow them to afford to stay in Palm Springs," wrote Kors.

"The objective of the project is to provide residents more choice in the power they receive and do so at an affordable cost," wrote Kors. "My commitment is that Palm Springs will be the first city in the Coachella Valley and Inland Empire, and one of only a handful in California, to transition to 100% carbon-free power."