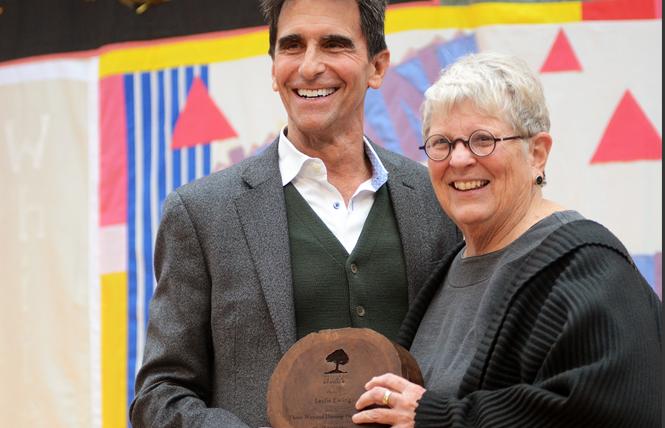 Gay former state senator Mark Leno, left, presented the Thom Weyland Unsung Hero Award to Leslie Ewing, a lesbian who worked for many years for HIV/AIDS organizations, for her years of activism and leadership, during the World AIDS Day observance Sunday, December 1, in the National AIDS Memorial Grove in Golden Gate Park. Rick Welts, a gay man who is president and chief operating officer for the Golden State Warriors, received the National Leadership Recognition Award for the impact his coming out has had on how the nation views LGBTs and AIDS (Welts lost his longtime partner, Arnie Chinn, to AIDS in 1994.) The AIDS grove also welcomed the return of the first panels of the Names Project AIDS Quilt during the observance. As the Bay Area Reporter recently noted, all of the quilt panels will be returning to the Bay Area and be under the stewardship of the AIDS grove. Quilt co-founders Cleve Jones and Mike Smith were on hand Sunday to announce the quilt's return. Gilead Sciences Inc. formally announced a $2.4 million grant to the AIDS grove that will fund the quilt programs and its move back to the Bay Area.