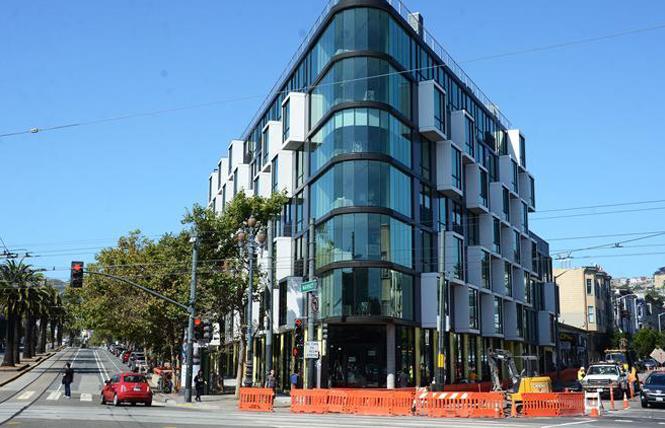 The lottery is now open for eight affordable apartments in the new building at 2100 Market Street. Photo: Rick Gerharter

The city is now accepting applications from those eligible to move into eight affordable apartments in the LGBT Castro district. The residents will be selected by a lottery draw to be conducted January 7.

As the Bay Area Reporter noted in an online story last week, the five 1-bedrooms and three 2-bedrooms are located at 2100 Market Street, the new building constructed by local developer Brian Spiers at a prominent corner parcel at the intersection with Church and 14th streets. The monthly rents for the units range from $1,293 to $1,440.

The lottery will also use the preferences similar to other District 8 housing projects. People displaced by redevelopment in the city's Western Addition and Hunters Point neighborhoods in the 1960s and 1970s will be given first preference for the eight units.

Applications are due by 5 p.m. Tuesday, December 17, and can be filed online at https://housing.sfgov.org/listings/a0W0P00000HbvrbUAB or downloaded from the website and mailed in by that date. It is a rare opportunity to apply for a brand new below-market-rate apartment in the city's LGBT district, as few such rental units have been built in the area in recent years.

The website for the lottery notes that people should not apply online and then mail in a paper application. It stresses that "all applications" from a person who appears on more than one application will be removed from the lottery.

The building has no parking spaces and is situated above the Church Street Muni Station. Across the street is the Safeway shopping center and on the other side of Market Street a short walk away is a Whole Foods.

As the B.A.R. noted in September, Sterling Bank wants to move its branch currently located in a storefront next to 2100 Market Street into the new building's corner retail space. It will need approval from the city's planning commission in order to do so and is expected to face opposition from those resistant to seeing financial institutions open in such prominent locations in the city's commercial districts.

The 23 foot tall tree is notable in that it is decorated with up to 17,000 origami paper cranes that contain messages of hope, peace, and other wishes.

Organizers said that people can still submit wishes online, and a team of more than 300 volunteers will fold them. They are then placed on the tree.

"We created the World Tree of Hope to inspire hope and to encourage people to think about what they would like for the future of the world, and then take action," Jeff Cotter, a gay man who is executive director of RWF, said in a news release.

RWF is an LGBT humanitarian nonprofit that works with other relief organizations around the world and in the U.S.

Cotter added that many of the volunteers are from the LGBT and Japanese American communities, survivors of the Hiroshima atomic bomb, local children, and inmates at San Quentin State Prison serving life sentences.

People can submit a wish by going to www.worldtreeofhope.org It is free and open to anyone. Wishes will be added to the tree throughout December and are accepted year round.

The tree itself will be on display at Grace Cathedral beginning Sunday, December 8, and will remain up through January 11. The church is open daily from 8 a.m. to 8 p.m.

On Sunday, December 15, the church will hold its pre-Christmas service from 10 a.m. to 2 p.m., which includes a potluck lunch and congregational meeting following worship.

Finally, community members are invited to attend the Christmas Eve service Tuesday, December 24, from 7 to 9:30 p.m.

San Mateo Pride Center director departs
The program director of the San Mateo County Pride Center has announced she is leaving the post this month and moving to Marin County.

Lisa Putkey wrote in a note in the Pride center's monthly newsletter that she has been "blessed" to direct the first LGBTQ center in San Mateo County.

The center opened three years ago, with 400 people attending. Other milestones include a delegation traveling to Sacramento to lobby for continued funding, which was successful; organizing queer proms; oral history projects; and intergenerational dinners.

"Every step of the way I have witnessed beautiful moments of healing, connection, growth, and change," Putkey wrote.

Putkey's last day will be Friday, December 13. People are welcome to stop by the center to enjoy tea and cookies and say goodbye to Putkey from 4 to 6 p.m. The center is located at 1021 S. El Camino Real in San Mateo.

For more information about the center, go to https://sanmateopride.org/

The trans elder holiday luncheon takes place Tuesday, December 17, from noon to 2 p.m. at Delancey Street Restaurant, 600 The Embarcadero. Interested people should RSVP by Friday, December 6, at 5 p.m. as space is limited and preselected meal order is required. All trans, genderqueer, and nonbinary folks are welcome.

Openhouse will hold its annual holiday party Saturday, December 21, from 2 to 4 p.m. at the Francis of Assisi Dining Hall, 145 Guerrero Street. Entertainment will include Openhouse's Dance Troupe and Bread and Roses. Refreshments will be provided. No RSVP is required.

A Hanukkah social will take place Monday, December 23, from 4 to 5:15 p.m. at Openhouse's Bob Ross LGBT Center, 65 Laguna Street. Attendees can enjoy food that is served during the Jewish holiday. Coffee and tea will be provided. No RSVP is required.

Finally, a Kwanzaa social will be held Thursday, December 26, from 2 to 3:30 p.m., at the aforementioned Bob Ross LGBT Center. Attendees will enjoy some of the wonderful dessert traditions of the holiday. No RSVP is required.

For years, rumors circulated that Crawford was more than Houston's creative director and in the book she opens up about her time with the singer. The women first met as camp counselors in the 1980s, eventually moving in together. Most recently, Crawford produced a podcast about her long-rumored relationship with Houston called "LGBTQ&A," hosted by Jeffrey Masters and produced by Neon Hum Media and the Advocate.

The upcoming program marks the year-end "Michelle Meow Show" program. There will be food and drinks, a conversation with Crawford, and holiday cheer.

Tickets are $5 for club members and $10 for non-members. The program takes place from 6:30 to 8 p.m. (check-in at 6) at the Toni Rembe Rock Auditorium, 110 The Embarcadero in San Francisco.