Editorial: Newsom should use surplus money 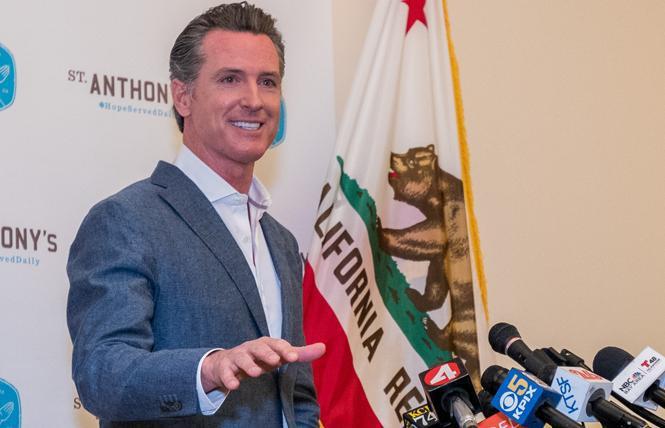 Last week the bipartisan Legislative Analyst's Office reported that California is expected to have a $7 billion budget surplus next year. This great news presents Governor Gavin Newsom an opportunity to support expected LGBTQ and LGBTQ-related bills that had been delayed because of their high cost.

Newsom signed Assembly Bill 493, the Safe and Supportive Schools Act of 2019, in October. It will require annual training for teachers and certificated staff, such as guidance counselors and librarians, with the goal of creating a safer and more supportive school environment. However, at the governor's request, the provision in the legislation making it mandatory was pulled, and in exchange, Newsom agreed to come up with the funding the following year, Equality California Executive Director Rick Zbur told us at the time. In September, an analysis of the bill estimated the cost at $3.25 million, based on there being about 130,000 certificated employees in roughly 2,600 middle, junior, and high schools statewide, and an expenditure of about $50 per staff member for training costs.

Another major bill has not cleared the Legislature. Gay state Senator Scott Wiener (D-San Francisco) is expected to reintroduce his bill next year that will ensure transgender inmates are housed in gender appropriate prisons based on their personal preferences. This year, Newsom indicated "a real commitment" to the legislation, Wiener previously told us. However, cost is a factor, and was one of the primary reasons Wiener pulled the bill in 2018 and again this year. The legislative analysis had estimated its costs would be "potentially major" for the California Department of Corrections and Rehabilitation, which would need to train prison staff and transfer transgender prisoners to new state correctional facilities. State leaders also estimated that the bill would result in additional costs in the hundreds of thousands of dollars to upgrade prison intake systems and identification cards. Recently, Wiener has been visiting state prisons in an effort to meet with trans inmates and prison officials to gain additional support for the bill.

Another bill pulled this year due to funding was AB 307, the Homeless Youth Grant Program, co-authored by Assemblywoman Eloise Gomez Reyes (D-San Bernardino) and Wiener. It had been coupled with an appropriation of up to $100 million and estimated $1.8 to $1.9 million for administrative costs by the state's Business, Consumer Services and Housing Agency. The bill would require using grant funds to provide supportive services and to establish or expand housing programs. Helping homeless youth, many of whom are LGBTQ, should be a top priority of lawmakers. If the state is going to make a dent in its homeless population, grants like these are crucial for success.

While the cost of these bills add up to hundreds of millions of dollars, it's a drop in the bucket in relation to the state's $7 billion surplus — which could grow to as much as $18 billion by the end of 2021, according to the legislative analyst. The teacher training bill will help prevent bullying and give educators the necessary skills they need to deal with incidents properly. Too often, teachers do not know how to respond appropriately to bullying, or worse do nothing, which only exacerbates the problem — both for victims and perpetrators.

The Legislative Analyst's Office did warn that while the surplus could sustain the state during a recession, public education funding would have to be slashed in the event of a downturn. There is also a question about whether $2 billion of the surplus depends on the Trump administration allowing California to tax organizations that manage the state's Medicaid plans, according to a report in Time magazine. We would argue that having a reserve fund is critical, but these four bills are equally important for improving the lives of the state's queer residents. For too long, LGBTQ-related bills have had to factor in minimal cost in order to be considered — and governors, including Newsom, have signed a lot of those bills. Now, however, the governor has enough resources to fund each of these bills to address issues of teacher training, trans prisoners, homeless youth, and hate crimes, and bring about substantive structural changes that have been postponed.