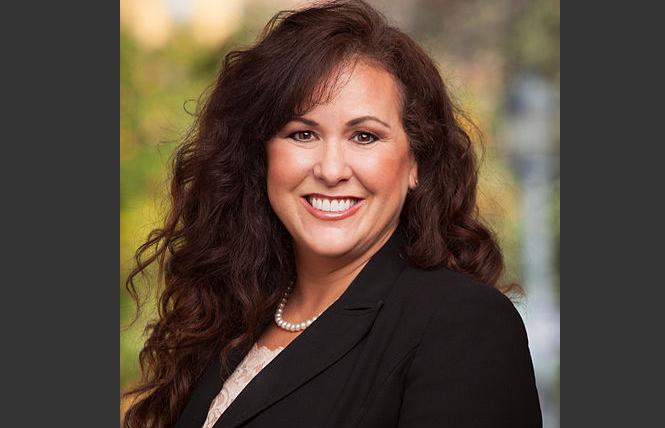 This summer Equality California issued a rare rebuke of a state lawmaker after the chair of the Assembly Appropriations Committee held up legislation that would ensure LGBT adolescents are treated the same as their heterosexual peers when faced with the possibility of being listed on the state's sex offender registry. That decision could now cost Assemblywoman Lorena Gonzalez (D-San Diego) the statewide LGBT advocacy group's endorsement of her re-election bid next year.

Her tabling the legislation, Senate Bill 145, caused EQCA to ding Gonzalez on its 2019 Legislative Scorecard, which was provided to the Bay Area Reporter ahead of its release Tuesday, November 26. Gonzalez received a score of 86%, one of only two Democrats in the Assembly not to earn perfect 100% scores this session.

Assemblyman Jim Frazier (D-Discovery Bay) may also not have the LGBT group's support as he seeks re-election in 2020 due to earning an 80% score. He lost points for being absent on the vote for SB 159, which will allow people to obtain HIV-prevention medications over-the-counter without a prescription. EQCA scored it as a no vote since Frazier didn't have a valid excuse for missing the vote.

Under EQCA's endorsement rules, it considers pro forma endorsements only for incumbent lawmakers who earned 100% scores on its two most recent scorecards. Because Gonzalez and Frazier both received perfect marks in 2018, they can request an endorsement interview with EQCA's political action committee. But they need to be able to successfully explain why their actions on the bills in question should be overlooked in terms of the PAC endorsing either's campaign.

"She will have to request an endorsement and explain why she believes our endorsing her is consistent with our endorsing policies," said EQCA Executive Director Rick Zbur, adding the same applies to Frazier.

EQCA informed both of the lawmakers Monday of their scores and how it impacts their ability to be endorsed. Through a spokesman, Frazier told the B.A.R. he didn't realize he had missed the vote and perhaps he was off the Assembly floor "in the restroom or something." He noted that he has had perfect 100% scores every other year since 2013.

In a statement to the B.A.R. Gonzalez expressed disappointment over how EQCA scored her this session but pledged to continue working with the organization to enact pro-LGBT legislation.

"My record on LGBTQ issues is clear and unequivocal. I am proud of the strong support I have received locally from LGBTQ organizations and leaders," stated Gonzalez. "I'm disappointed that EQCA is using a procedural issue to project that somehow I have been less than committed on all aspects of equality, but I still look forward to continuing my work with Senator Weiner and his bill next year."

It is unusual for EQCA to factor a committee vote, or in the case of Gonzalez a committee decision, into a lawmaker's score. It has occurred at least once, said Zbur, since EQCA began releasing scorecards in 2005. Normally, legislators' scores are based on their floor votes for the LGBT bills that EQCA sponsors.

Thus, EQCA held Gonzalez's turning SB 145 into a two-year bill against her, explained Zbur, because "she is responsible for the decision to hold it."

Her doing so particularly irked EQCA since it was convinced the votes were there in the Assembly to pass the bill and send it to Governor Gavin Newsom's desk for his signature. The state Senate had already backed SB 145, authored by gay state Senator Scott Wiener (D-San Francisco), who hopes to see it be passed by his legislative colleagues in early 2020.

Gonzalez has told EQCA leaders it is her intent to move the bill fairly quickly out of the appropriations committee once lawmakers return to the statehouse in January so the full Assembly can pass it. The bill is likely to be amended, meaning the Senate would need to vote on it a second time before it can be sent to Newsom.

"We are not expecting to have a challenge on getting this bill approved," said Zbur. "It really is about addressing the concerns the appropriations chair raised. We are looking forward to working with her to move the bill forward."

SB 145 also factored into why three Democratic state senators all received 91% scores from EQCA. Senators Cathleen Galgiani (D-Stockton), Melissa Hurtado (D-Sanger), and Susan Rubio (D-Baldwin Park) lost points for having unexcused absences on the vote, so EQCA scored it as no votes.

Galgiani, one of four lesbian lawmakers in the Legislature, was the only member of the Legislative LGBTQ Caucus not to receive a 100% score this year. The six other caucus members all earned perfect marks. It is not the first time that Galgiani, who will be termed out of office next December, has fallen short on the EQCA scorecard. She also earned a 91% three years ago.

Hurtado and Rubio are not up for re-election in 2020 so they have time to improve their scores before seeking EQCA's endorsement. Altogether 59 Assembly Democrats and 26 Senate Democrats earned perfect scores from EQCA.

Congratulations to all of the legislators (both Rs and Ds) who received a 100% on @eqca's 2019 State Legislative Scorecard! We're ready to pass even more pro-equality bills in 2020, including measures to support intersex human rights, incarcerated trans folks & more. #CAleg https://t.co/NXORXUqa8h— Josh Stickney (@joshstickney) November 26, 2019

The scores for Assembly members and senators were calculated differently this year due to several bills only being voted on the floor of one chamber of the Legislature because the legislation was held until next year once it was sent to a committee in the other chamber.

As expected Newsom earned a 100% score from EQCA. In October the B.A.R. noted the Democrat was set to receive perfect marks on the scorecard since he signed all five of the LGBT bills sent to him that EQCA sponsored. (He also signed into law two bills related to LGBT-owned business contracting that EQCA did not sponsor).

"We are really happy with Governor Newsom," said Zbur. "We appreciated the level of engagement his staff had on our bills as they were working their way through the legislature."

Because both scored less in 2018 — Cunningham had 86% and Mayes 80% — they will need to request an endorsement from EQCA's PAC. Similar to Gonzalez and Frazier, the pair of GOPers would need to have a satisfactory explanation for why they should have EQCA's support despite their votes from last year.

"They consider themselves allies of our community and they pay attention. They meet with our staff on our bills and try to understand them," noted Zbur. "We appreciate their focus and their support for LGBTQ equality."

According to EQCA, it has endorsed only three Republican legislative candidates in years past. The first came in 2014 when it backed Glenn Miller, an Indio city councilman who lost his bid that year for a state Senate seat.

Last year, EQCA supported former Assemblywoman Catharine Baker (R-Dublin) in her failed bid for a second term. And EQCA initially had endorsed San Diego Assemblyman Brian Maienschein, then a GOP member. But it rescinded its support after Maienschein voted absent on a transgender foster youth bill, costing him a perfect score two years in a row on EQCA's scorecard. He ended up with a 91% score in 2018.

At the beginning of this year Maienschein switched parties, became a Democrat, and earned 100% on EQCA's scorecard. It means he too can request an endorsement from EQCA's PAC but must be able to explain his vote last year in order to secure it.

Cunningham and Mayes did not respond to requests for comment by the B.A.R.'s press deadline. Maienschein's campaign said he will seek EQCA's endorsement.

"We are excited to see more bipartisan support this year for our bills," said Zbur. "The number of Republicans voting for LGBT legislation is growing each year."

Due to next year's primary ballot with the state legislative races being moved up to March 3 because of the presidential race, EQCA plans to announce additional endorsements in the Assembly and Senate races in early December. As the B.A.R. has previously reported, a number of LGBT legislative candidates secured early endorsements from EQCA.