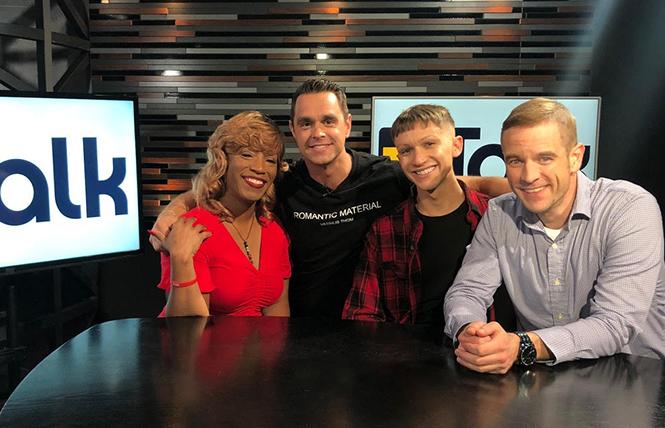 Undetectable equals untransmittable, or U=U, is the message Karl Schmid works passionately to spread these days. As one of the few openly HIV-positive broadcasters on U.S. television, he wants to use his position to fight against what he believes is pervasive HIV stigma.

Since 2012, Schmid has worked as a producer and station host for ABC7 in Los Angeles. In March 2018, Schmid said that he publicly disclosed his HIV-positive status on social media, even though people had warned him, "You don't want to be known as the guy with AIDS on TV."

He said that he's received "great support from ABC" since his disclosure, but also said he has been unable to get a story about U=U on TV.

"We do stories about testicular cancer, and it's great that we highlight these stories," he said in a recent phone interview. "But if we don't talk about HIV, people will not get tested or treated."

After this article was published, Schmid asked to clarify that KABC in LA has given him "a lot of airtime to talk about U=U and HIV in the last 18 months."

"It's more at the national network level where I struggle to get any traction. HIV just doesn't seem to be an attractive topic for morning news TV," he wrote in an email.

Launch of PlusLife Website
Frustrated by that situation, in September Schmid and two business partners launched the PlusLife, or +Life, website so that "people can see people that look like them, talking about HIV without all the medical jargon." As Schmid himself admitted, "When the doctor starts talking technical details, I just zone out."

He believes people who find out they are positive continue to ask, "Am I going to be OK? Is there anything I should know?" Even today, he observed, "People are absolutely petrified of telling people, or even getting tested."

(As the Bay Area Reporter noted in a story on its website Monday, and in the print edition, stigma continues to remain pervasive, notably among young people, according to a new survey.)

The PlusLife website is composed of several digital streams: +Talk, +Science, +First, +Love, +Fun, and +News. The focus is on eliminating stigma through open, candid conversations and access to information. Schmid characterized the site as another step in his journey after revealing his own HIV+ status last year.

Presenting interviews with newsmakers, publicizing medical advances, and hosting discussions about health and sex, along with first-person accounts of people living with HIV, PlusLife also aims to be a source for facts and resources explaining how to avoid contracting the disease.

Schmid considers the +Talk show he hosts the flagship series. Guests talk about their experiences as HIV-positive and includes people from the gay, straight, and transgender communities. Videos produced weekly address topics such as how to discuss HIV-positive status with friends and family, which he feels may be especially relevant during the upcoming holiday season.

Recent +Talk episodes have covered HIV and the trans community, dating between -positive and -negative partners, and issues like self-harm. An upcoming episode makes the case for PrEP and will feature "two gay guys, myself, and a hetero man born with HIV," Schmid said. Each episode is from 12 to 15 minutes long. The site will soon roll out extended versions on YouTube, which will be titled "After Talk."

Schmid believes that today, considering everything medical research has produced, "managing HIV may even be easier than managing diabetes."

Schmid is executive producer and editorial director of PlusLife Media; the site is funded by ad sales.

Growing up in Australia and coming out
Schmid, 39, was born outside Melbourne, Australia, and recalled how his childhood changed at age 10 when his brother was cast in a popular Australian soap opera. "I loved the whole world of make-believe," he said. Schmid started seriously exploring drama in high school and worked on the New Zealand children's show "What Now" from age 15 to 18.

A few years later he was living in London when he decided to come out to his parents. When he called them on the phone, "My mother was preparing a dinner party for my father, and somehow she and I got into an argument. We were pushing each other verbally, and I lost my temper and loudly declared that I was a cocksucker."

His grandmother reacted with an "Oh, well" but his mother burst into tears. Schmid said he was not sure his grandmother heard him clearly, but was relieved when both relatives quickly calmed down.

He returned to Australia in time for the 2000 Olympics and was hired to work for an event production company. That went well and at age 22, he was hired as the personal assistant to the drag entertainer Dame Edna, also known as Barry Humphries, a straight ally.

Schmid moved to the U.S. about 12 years ago. That eventually led to his working the last seven years "both in front of and behind the camera."

His interest in media expanded in new directions when he co-founded PlusLife Media.

"I wanted PlusLife to have more of a lifestyle feel, not just talking head videos. More of a destination with resources," he said. "People have leftover ideas from the 1980s and 1990s when there was no way to avoid 'fear campaigns.'"

"[HIV-positive people] will live a very long and healthy life," Schmid asserted. "Some would argue that some get more medical attention than other people." While he said that is not how he felt when he found out he was HIV-positive, numerous studies have shown disparities, for example, in access to PrEP, especially among people of color and transgender people.

"I had a dream where I saw a red digital countdown clock appear over my head and start going backwards," he said. "I was a 27-year-old gay man starting his life, and I had fucked up."

But now Schmid seems to be living the tagline of PlusLife: "turning positive into a plus." As he put it, "When I learned about U=U, someone gave me the keys to those handcuffs and set me free. I have 11 years of internalized stigma. No one should be made to feel that because they had sex with someone who has HIV that their life is over."

Moving forward with PlusLife
Schmid emphasized, "PlusLife is for everyone. I'm not targeting gay men. I want everyone to see or hear versions of themselves." He's encouraged by responses he has received from locations as distant as Pakistan and Vietnam.

Since he and his business partners launched PlusLife less than two months ago, the website has received over 500,000 visitors, according to Schmid. On a more personal level, he said, "I've had two people reach out to me within a half hour of their HIV diagnosis and ask me questions, and I've responded. 'This is exactly why we're doing this!' I've said to my partners."

Schmid ended the interview by repeating what he considers the most important point: "U=U. The stigma is killing people and is no longer warranted. I cannot transmit the virus to you if I'm undetectable.

"We have to eliminate all this red tape to getting medication," he added. "If everyone that is HIV-positive got on the medication, we could end the epidemic now. With World AIDS Day coming up, it's a day for people like me to stand up and say, 'You're not going to beat me down with your stupid stigma.'"

For more information, visit www.pluslifemedia.com, and on Twitter at https://twitter.com/pluslifemedia?lang=en

Updated, 11/27/19: After this article was published, Mr. Schmid asked to clarify his previous comments on ABC-TV, which have been added.