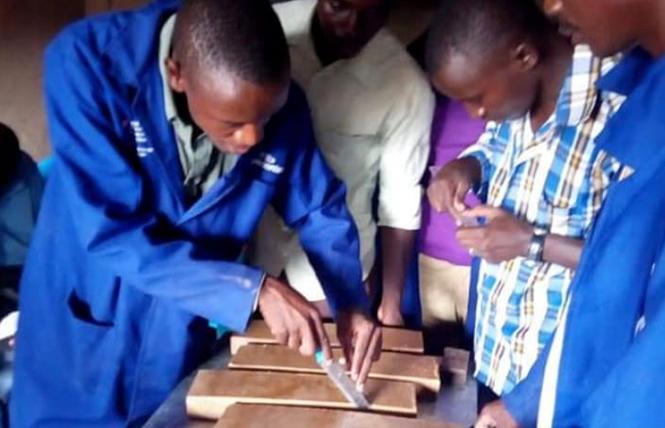 LGBT refugees in Kakuma refugee camp in northwestern Kenya learn how to make soap as a part of an entrepreneurial program launched by Upper Rift Minorities, a human rights organization working inside the camp. Photo: Courtesy ORAM

Soap is a necessity to maintain good hygiene, but for the thousands of refugees living in Kenya's notorious Kakuma refugee camp, soap, shampoo, and conditioner are costly commodities to come by.

The products are an opportunity that Billy, the director of Upper Rift Minorities, realized as something that could help LGBT refugees in the camp by starting microbusinesses. (Billy asked that his last name and how he identifies not be published because he has received death threats.)

"Soap is really, really a big thing in the refugee camp," said Billy.

Upper Rift Minorities launched a trial program from April to August 2018 with 16 queer refugees. (The government put the program on hiatus afterward because it needed to approve the soaps. There is a group currently being trained in preparation of the items being approved, according to Steve Roth, executive director of the Organization for Refuge, Asylum, and Migration, which is helping with the project.)

The changes among the LGBT refugee soap makers and the broader refugee camp were rapid.

"By virtue of doing something, some of them who had already lost hope in life started seeing hope again," said Billy.

The community relationships also began to grow and for four months after the launch of the trial project anti-LGBT violence dipped as the LGBT refugees became known for their soaps rather than just their sexual orientation or gender identity.

Billy's goal is to help LGBT refugees learn business skills so that they earn an income and build a community among themselves. They could also build relationships with the general refugee population that could in turn lead to increased security for them.

The Minnesota-based ORAM launched a campaign November 19 to aid with creating more LGBT-operated soap-making businesses inside the camp to help the refugees.

"The livelihood programs are critically important," said Roth, a gay man who has long led the organization.

The nonprofit, which currently operates on a budget of $500,000 annually, is the first in the world to focus on LGBT asylum seekers and refugees.

Roth pointed out that a new strategy is needed as resettlement times continue to get longer, leaving LGBT refugees in an impoverished limbo in what are known as transit countries.

In a survey conducted by his organization, Billy identified that many refugees are frustrated about not having their basic needs met.

"More than 70% [of residents] in the refugee camp have no job opportunities and have literally no source of income," Billy said.

"LGBT asylum seekers in the refugee camps, particularly in Kakuma, are really some of the most vulnerable and at-risk groups," explained Roth.

Creating and selling soaps "will be a way to slowly build hearts and minds, which will build a relationship with the local community and achieve long-term safety," said Roth.

The camp's current population is estimated to be 191,500, according to the United Nations Human Rights Council's 2019 census.

The camp has been a dangerous place for LGBT asylum seekers and refugees. For years, reports of LGBT people being attacked by other refugees have been reported.

Earlier this year, the violent attacks against LGBTs residing in the camp got so bad that protests broke out in May. Around the same time, a group of nearly 80 LGBT asylum seekers and refugees escaped from the camp and set up a safe house in Nairobi, Kenya's capital city. They continued to protest outside the United Nations refugee agency's offices in the city, demanding that the agency provide support with financial assistance and work permits to allow them to gain employment while they await resettlement.

A month later, the U.N. with the assistance of Kenya's government, returned the LGBT refugees to Kakuma in northwestern Kenya.

Gay sex is illegal in Kenya.

Changing the tide
"The people, especially the transgender community, who are at a higher risk for being attacked — they are the ones who are now getting friendly to people," said Billy, talking about how people are making the connection and beginning to overlook that the person is LGBT and, rather, someone who "can also provide soap to us at a cheaper cost, so you are the best."

Interest in the program quickly grew as more LGBTs in the camp are coming to the organization wanting to participate in the entrepreneurship program.

"Every LGBT refugee in the camp wants to be a part of this business," said Billy.

Billy estimates it costs between $2,400 and $10,000 total for a group of 10 queer refugees to launch a business, depending on if it's bars of soap or shampoos and conditioners. The goal is that after a time members of the group go off to start their own business with their own team in another part of the camp.

It costs the refugees nothing beyond the transportation fee provided to a peer business mentor who meets with them monthly to review their business with them and provide advice.

The long pause in anti-LGBT violence was broken this month. Billy said that he has been receiving threats and noted that an unidentified Ugandan transgender male refugee was violently attacked in broad daylight November 14.

While the soap program is on hiatus, Billy launched a chicken program to help HIV-positive LGBT residents of the camp get protein into their diet with one egg a week. The program currently supports 30 LGBT refugees operating three hatcheries and has produced 70 chickens. In addition to providing more nourishment beyond the food aid provided by organizations, it also helped them earn income and learn business skills. The farms sell the chickens, along with chicken and rice dishes they make at a kiosk, to other refugees.

Roth gave a chicken for one of the chicken farms at the camp and gave 100 chicks to Team No Sleep's chicken farm in Nairobi on behalf of ORAM supporters during his 11-day tour meeting with LGBT organization and company leaders.

The chicken business startup costs are estimated at $10,000 for a group of 10 LGBT refugees to launch, Billy said.

Billy told the B.A.R. he has many other business ideas that will fit into the program's model.

The program's success impressed Roth when he visited Kakuma. He spent two days touring the camp, speaking with Billy and LGBT refugees.

Roth said that the program is exactly what he has been looking for as he figures out an alternative to helping displaced LGBT people stuck in transit countries for the foreseeable future. Countries, including the U.S., which reported receiving zero refugees in October, are increasingly closing their borders for all asylum seekers and refugees. A process that is notorious for its wait times for resettlement continues to get longer.

"Unfortunately, refugee and asylum seekers are spending longer times in transit countries," the countries they flee to from their home countries, Roth said. "We are seeing similar trends in a number of other countries where slots are being limited.

ORAM's campaign is just the beginning of a larger project targeting livelihood programs as asylum seekers and refugees are finding themselves stuck in limbo.

"We want to help them develop skills that they can take with them as they continue with their life and use in other phases of their life," Roth said, adding that he's in talks with some companies in Kenya about mentorship programs with the LGBT refugees.

Roth also visited other organizations, including the queer woman-focused Foundation for LBQ Womxn Refugees, during his trip.

"Refugees and asylum seekers want to know that they are not alone and that there is someone out there that has their backs," said Roth.

To help asylum seekers and refugees in Kenya, visit https://oramrefugee.org/donate