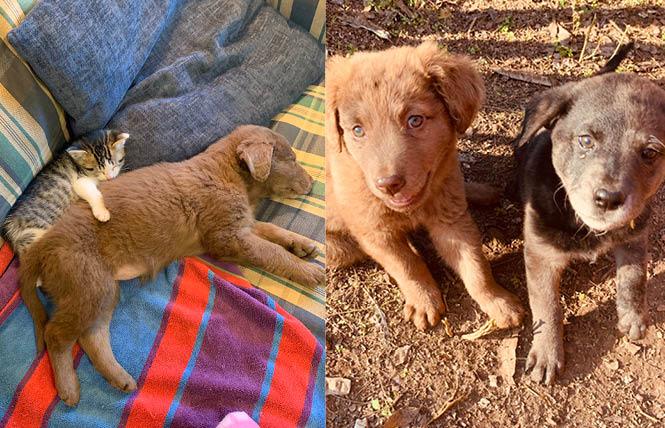 Shannon Minter and his wife, Robin, have adopted Squeaky, the kitten, and Albert, left. At right is Albert with Sister, another puppy the couple adopted earlier this month. Photos: Courtesy Shannon Minter

Despite his high-profile job as legal director of the National Center for Lesbian Rights, Shannon Minter doesn't have much of a social media presence. The only profile he has is on Twitter.

And much of what he posts on the platform correlates to his work fighting to protect the rights of transgender individuals and other members of the LGBT community. Mixed in among those tweets - and retweets of other people's posts on the topic of equal rights - are the occasional posts about his private life.

Minter, who is a transgender man, purposefully limits what he shares online (and in the press) out of a sense of precaution for both himself and his wife, Robin. For instance, while he will discuss living in a rural part of north Texas, Minter prefers to not divulge the name of the town the couple calls home.

Thus, after he discovered a stray kitten and a puppy within hours of each other on Halloween, Minter debated if he should post about the coincidental finds. It wasn't until three days later that he decided to do so.

"I wasn't going to say anything. But I took a bunch of pictures of them and I thought maybe I should tweet one of them," Minter recalled. "Then I thought nobody wants to see that. But then I tweeted one photo because they are so cute."

He shared a snapshot of the pair nestled together asleep on the couch with a note announcing that the couple had decided to adopt them, even though they already had two dogs and three cats. It went live shortly after 6 p.m. Sunday, November 3, and Minter didn't think much of it prior to going to bed that night.

Still not sure how this could be, but I found both an abandoned kitten and, independently, an abandoned puppy on Halloween. They are now bonded, and abandoned no more. pic.twitter.com/FoX8VfYBBf— Shannon Minter (@shannonminter5) November 4, 2019

When he checked his Twitter feed in the morning, Minter was amazed to see that his tweet had been liked by thousands of people overnight. It has since racked up 142,000 likes and been retweeted nearly 17,000 times.

"I woke up the next morning and saw this thing went viral," Minter told the Bay Area Reporter in a phone interview a few days ago as he walked the eldest of his dogs, Onyx, who is 8 years old and was adopted by the couple seven years ago.

Comments ran the gamut from outright joy, such as his former boss Kate Kendell's reply "This is amazing...," to a marriage proposal from a cat lover who inquired, "Are you married? Would you like to be? This tells me everything I need to know about what kind of person you are."

A number of people also requested more photos and updates about the adorable fur-babies. Minter named the kitten Squeaky, a girl who is very vocal, and the male puppy Albert since one of his colleagues had remarked "he looks like an Albert."

Pretty much on a daily basis ever since, and on some days multiple times, Minter has obliged the fans of his new four-footed charges with photo and video updates. Included was an early scare about Albert's health after he spent the night at the vet due to a negative reaction to being vaccinated.

For the foreseeable future Minter plans to continue tweeting out photos and news of the new additions to his family, which also now includes a female puppy Robin Minter found alone on their property November 11. The couple named her Sister since the Minters believe she is Albert's sibling.

"It is so fun," Minter said of keeping the animals' adoring fans apprised of their well-being. "It is no burden at all to post photos."

The expansion of his family began the afternoon of October 31. Minter was returning from two days of meetings in San Francisco to his Texas home. Minter and his wife, who married in 2001, live in an old farmhouse in the town where he and his parents and grandparents were born and raised.

"I pulled into the driveway and as soon as I got out of the car I heard a heartbreaking wailing sound. I said, 'Oh my gosh! What is that?' Clearly, it was an animal in distress," recalled Minter.

He went over to an old garage on the property that has a shed attached to it and initially didn't see anything. As he looked around the structure he soon spotted a kitten's face peering up from underneath a board it had gotten trapped under.

"I was scared and afraid I would squash it trying to get her out. The boards are old, and I was concerned if I move one of them then they all would collapse," said Minter. "I was really careful, lifted up the board, and she just went right to me."

As he held her in his arms, Minter said to himself, "I guess I am rescuing a kitten today."

He took the animal inside and called a cousin who is an expert on rescuing animals for guidance. On her advice, he warmed a towel in the dryer to wrap the kitten in and bought special kitten formula to feed her.

Later in the day he took his two dogs for a walk; Onyx and Gaia, an 11-month-old Great Pyrenees and Anatolian Shepherd mix adopted from his cousin in March. Rather than take their normal route, they went a different direction.

"I don't know why but glad I did. I was walking the dogs on this old country road when this little puppy came running out," said Minter. "I was looking everywhere for a mother and other puppies but couldn't find them. The puppy looked very bedraggled and not in good shape, so I took him home with me."

Minter was wearing a hoodie with a front pouch, so he put the pup inside it to warm him up, like a kangaroo parent.

"He was so sweet, I just fell in love with him. Then when I got him home, the kitten and puppy just bonded," said Minter, who again turned to his relative for advice. "My cousin told me to let them interact. She said it would be really good for them, and they responded immediately. They were snuggling and cuddling and playing."

The whole time he kept thinking to himself it was a scene straight out of a poorly written young adult novel.

"If you read that in a YA novel you would say, 'Yeah right, that would never happen.' But it really did happen," said Minter.

Having been out of town on a trip, Robin Minter didn't meet Squeaky and Albert in person until she returned home the night of November 3. After a bit of cajoling, said Shannon Minter, she agreed they could adopt the pair, leading to his initial tweet about the news.

Daily photo updates via Twitter have ensued ever since, with Robin Minter sending her husband photos when he is out of town for work. He happened to be away on Veteran's Day, November 11, when his wife texted with some unexpected news. That morning she had found the second puppy in their yard.

"I said, 'Oh my God! I can't believe it,'" recalled Minter. "It has got to be a sister of Albert. They are the same size and look a lot alike."

Very sad to be leaving the babies this morning. Have to travel for work, will miss them terribly. Counting on Robin to keep us updated! #Albert #Squeaky #Sister #Gaia #Onyx pic.twitter.com/Of5wHC4N8o— Shannon Minter (@shannonminter5) November 19, 2019

It was two years ago that the couple had taken in their last stray animal, a cat found in a pipe by a neighbor. Thus, they named her Piper and introduced her to their two other cats, Beulah and Sammy, which they adopted about nine years ago.

"Oh gosh no," replied Minter when asked if they had talked then about adopting any additional animals. "We thought we had our hands full already."

But then his cousin's dog had a litter of puppies in January, so the Minters offered to take one in not knowing fate would bring three more newborns into their lives within eight months. In a matter of weeks, said Minter, the latest trio has become "part of the family."

The Minters have kept an eye out to see if any more puppy siblings show up, but so far none have. Shannon Minter told the B.A.R. he isn't opposed to expanding their brood if one does since they have a large enough property for doing so.

But in a concise emailed reply to the B.A.R., Robin Minter wrote, "Eight is enough."

A financial consultant who works from home, she shoulders much of the pet care duties, noted her husband, as he often is traveling for work. (He is not in the running to succeed Kendell as NCLR executive director; an announcement of who that person will be is expected next month.)

"I often work from home but I have to give my wife a lot of credit, as I have also been traveling a lot," he said. "My wife, she is really bearing the burden."

Minter is enjoying not only getting to know the adopted trio's personalities and quirks but also delighting the Twittersphere with his photographic pet updates. Depending on the day, his tweets about the canine and feline brood can result in anywhere from a few hundred to thousands of likes and retweets.

With so much negative news of late, he suspects his tweets offer people a nice respite from the headlines of the day.

"I am so happy to be bringing so much happiness to other people," he said. "Just having them for me, and I know it sounds kind of cheesy, has given me a whole new lease on life, seriously. I am just loving them; they are so sweet."