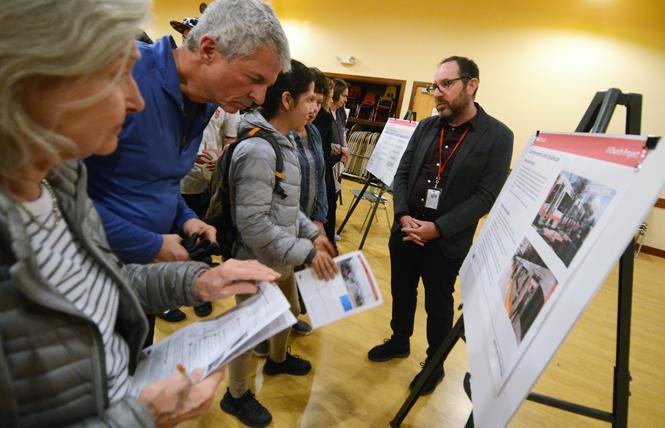 Monday night the San Francisco Municipal Transportation Agency held a meeting in Noe Valley to present to the public its proposal for speeding up service on Muni's notoriously slow J-Church subway line. The presentation kicked off at 5:30 p.m.

Yet those downtown trying to make it to the meeting, held at a recreation center a short walk from a J-Church stop, left work that night to discover the next J-Church trains wouldn't arrive for 28 to 30 minutes. They expressed their frustrations in text messages to District 8 Supervisor Rafael Mandelman, a gay man who represents most of the neighborhoods that the subway line traverses through on its route.

"It is not functioning anywhere near close to how it could be functioning," Mandelman told the Bay Area Reporter.

J-Church trains, which carry 17,000 riders on weekdays, should arrive every nine to 10 minutes on weekdays and less frequently on weeknights — every 15-20 minutes — and every 12 minutes on weekends. But J trains are adhering to the schedule only 75% of the time.

Since being elected in June 2018, Mandelman has been meeting with SFMTA staff to discuss ways to address the lackluster performance of the J-Church, which leaves the underground subway tunnel behind the Safeway shopping center on upper Market Street to turn left onto Church Street. It then runs along the surface street through the Castro and Noe Valley before heading to Glen Park and its terminus at the Balboa Park BART and Muni station.

"When we started down this process, I was hoping to see some game-changing solutions that would make the J work," said Mandelman. "These may be good improvements — I think many or all of them are — but we are still looking for the game-changer."

As part of its J-Church Improvement Project, SFMTA plans to approve a slew of quick fixes next year. It has proposed timing several traffic signals along Church Street to benefit the trains and turning a four-way stop at Cesar Chavez and Church Street into a traffic light stop.

It is looking to remove the inbound stop at 30th and Church streets — which is roundly opposed by residents in the area — since there are several other stops a short walk away. And it is reviewing if J-Church trains can travel faster than the current 25 miles per hour along San Jose Avenue enroute to and from the Glen Park BART station stop.

A number of safety improvements are also under consideration, such as improved buffer zones at stops and removing parking spaces at certain stops, which the SFMTA refers to as "daylighting."

"The near-term improvements could reduce travel time between 30th and Market Street by about 5%. This travel time savings would be invested into providing more leeway in the schedule, which will improve reliability," SFMTA spokeswoman Erica Kato told the B.A.R.

The current plan is for SFMTA to hold a public hearing on the proposals, said Kato, then present a final list of proposed changes to the SFMTA board sometime in February or March for approval.

"The J Church Project will be reviewing community feedback regarding all project proposals and will assess whether there is a need to make refinements to the existing proposal," she wrote in an emailed reply to questions. "The ultimate decision will be made by the SFMTA board."

Mandelman told the B.A.R. he feels "generally positive" about the proposed changes and expressed his gratitude to the SFMTA for coming up with a plan to improve J-Church service, which he called "abysmal." But he questioned how much of an impact the changes would have in the near term.

"I don't know if any of these changes altogether are going to deliver the service people living in Noe Valley, Glen Park, and the Castro deserve," said Mandelman.

Anything to improve his commutes on the J-Church would be welcomed by Keith Kunkel, a gay man who lives on Liberty Hill and takes public transit to his job at a hardware store in Oakland. Most weekdays he leaves his home at 6:30 a.m. in order to grab a J-Church headed downtown, where Kunkel will transfer to a BART train at the Montgomery station.

Half the time Kunkel opts to walk roughly 20 minutes to catch a BART train from the 16th and Mission streets station rather than wait for a J-Church. On Fridays especially, when he leaves a little later in the morning, Kunkel said it can take 45 minutes to make it to the Montgomery station via the J-Church.

"It sounds good," Kunkel said after reviewing the proposed changes at the meeting Monday night. "It would be nice if some of this stuff happens."

Mandelman said it is "not uncommon" for people in Noe Valley to walk to the 24th and Mission streets BART station to get downtown rather than wait for a J-Church.

"I hear that from a lot of people," he said.

Problems persist
Six years ago city transportation leaders attempted to improve service on the J-Church line by adding red transit-only lanes and restricting private vehicles from making left-hand turns at certain intersections so they weren't delaying the transit trains. The changes reduced travel time variability by 27% and improved travel times up to 14% on that segment of the route in the Castro and Duboce Triangle neighborhoods.

More recently, the transit agency has instructed operators of the historic trolley cars that travel along the J line from their overnight yard at the Balboa Park station when being put into service or taken offline to stop at the J-Church stops to pick up and let out passengers. Doing so adds additional capacity to the line, especially during mornings and evenings.

Nonetheless, complaints continue about the J-Church. It is often slowed down by the numerous stop signs and traffic lights along Church Street. Several stops along the route in Liberty Hill require the transit agency to only run one-car trains on the line because there would be no safe place for passengers to disembark from additional cars.

Other issues that can bunch up J trains is how the underground tunnel running below Market Street was initially built, requiring both the J line and the N-Judah line to cross outbound L, K, and M trains when headed toward downtown from the Duboce tunnel. And if any train stalls in the subway system, there is no way to easily run other trains around it, leading to systemwide backups.

SFMTA is working with several other agencies to renovate the bathroom at the Embarcadero station to make train operators' bathroom breaks "more efficient." It also has a pilot underway to speed up how J-Church trains turn around at that station.

In the spring, the agency plans to increase its management of the line to address trains bunching or falling behind schedule. Additional, more expensive fixes for the J-Church are under consideration as part of the SFMTA's longer term Muni Forward initiative looking at systemwide changes in years to come. Kato told the B.A.R. those improvements could improve travel time on the J-Church line by an additional 15-20%.

"This has to be the start not the end for improvements on the J," said Mandelman.

To learn more about the coming changes to the J-Church line, visit https://www.sfmta.com/projects/j-church-improvement-project