Guest Opinion: On smokeout day, trans folks need a world worth quitting for

by Amaya Wooding, Lynn Chan, and B. Chen 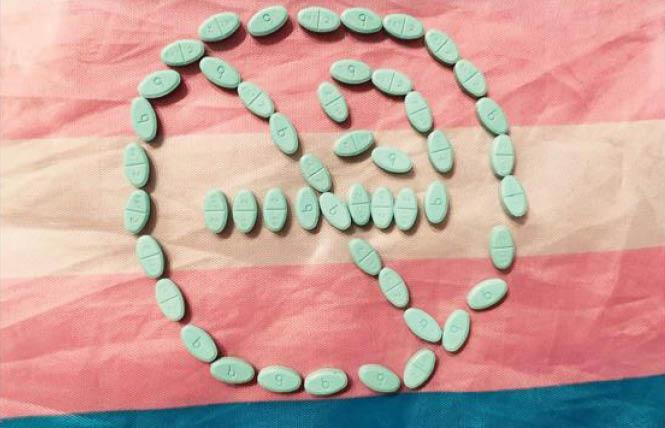 Amaya Wooding created this image of estrogen pills in the shape of a no smoking sign against the trans flag for a recent health equity conference. Photo: Amaya Wooding.

Depending on which research you believe, as many as one in three trans people uses tobacco. We are three Asian American trans women who grew up and live in Fremont, a large, relatively conservative suburb between San Francisco and San Jose. As it so happens, one of us smoked menthol cigarettes until recently, when she quit to start hormone replacement therapy.

So, why do so many trans folks use tobacco? Our high use rates rival those of other demographic groups like Native Americans and young bisexual people in the United States, and adult men throughout much of Asia. Our behavior is not some innate failing but a response to our circumstances. For our population at large, it's not being transgender that's the issue; it's living in a society replete with transphobia and transmisogyny.

Among the general population, most people who smoke or vape want to quit, yet trans women who face discrimination for being trans are less likely to try quitting in the first place, and will have less success when they do try. It's not that we don't know it's unhealthy. That fact has been hammered into us by decades of public health messaging. Yet, when we've had sexual obscenities shouted at us from across the street and been called embarrassments and "not even human," breathing in cancer-causing chemicals becomes something we can easily do. The accompanying head rush from nicotine, the quick high, and the comforting taste of tobacco become a coping mechanism and a ritual to put up with omnipresent anger and outright hate that merely living attracts, even in San Francisco where we work and attend school.

The trans smoking rate doesn't just appear spontaneously in adulthood. California regularly asks students statewide how they're doing. Trans students' responses tell us they try tobacco more than their non-trans peers, do so at an earlier age, and are more likely to use cigarettes and other products on school grounds. This early experimentation often leads to lifelong addiction and poor health. But it doesn't have to be this way.

Trans-led spaces are the backbone of our efforts to heal ourselves. It makes sense; no one else can credibly talk about our problems and our solutions. We respond to cessation services that address our concerns. Even when it's hard for us to care about our health, we respond to hearing that tobacco use can counteract estrogen and sour our surgical recovery. We can set a goal of zero for the trans smoking rate, but focusing on cessation without addressing the structural problems is a Sisyphean endeavor.

In the larger services network, we need providers who see us, accept us, and affirm us, not just when we try to quit tobacco but throughout medicine. We need providers who don't look to our transness as an overriding cause for any care we seek. When we get misgendered on the phone because of our voice, or in emails because of staff who don't know how to use singular they, or call us the wrong name, we remember, and often we don't come back.

Even with the best services, how can we expect trans people to quit when we haven't addressed the factors and forces that drive us to use tobacco in the first place? When we confront transphobia, we must also grapple with the reality that many trans people's struggles are exacerbated by other substance use, poverty, racism, unemployment, homelessness, and mental illness. Our ancestors understood the significance of specialized social roles such as bakla in the Philippines, fa'afafine in Samoa, and dàn in Beijing Opera was, but colonialism replaced these with the false binary of boys and girls. Where there was once spiritual or artistic significance in our feminization, our cultures see deviance.

On this Great American Smokeout day, which is November 21, we still invite trans folks to quit using tobacco for a day, even if only to reflect on what unmet needs the rituals of tobacco use fulfill. We invite everyone to bring about a world where Transgender Day of Remembrance is silent and trans lungs are healthy and clean.

Your contributions can be small and concrete: Give money to black trans women. Buy a binder for your nonbinary or trans man friend. Practice using singular they.

Most of all, to paraphrase a song from "Mulan," which is a cultural touchstone for both Asian Americans growing up in the 1990s and 2000s and trans men and transmasculine folks: think of instead, a world worth quitting for!