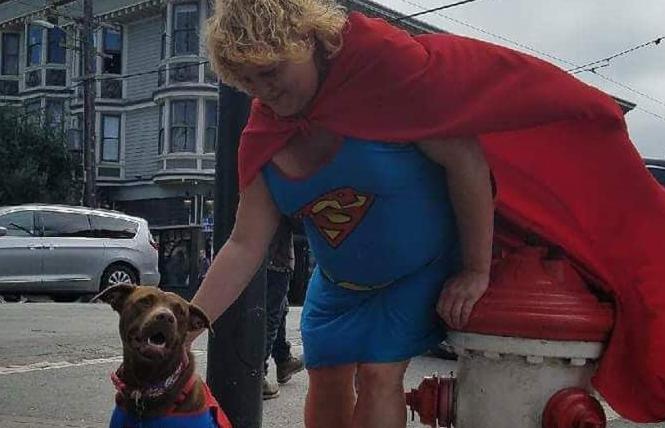 The city of San Francisco recently paid $13,000 to the transgender activist known as the "Supergirl of San Francisco" to settle a First Amendment lawsuit brought against it — which already resulted in change to the written policies that cover City Hall protests.

Shawn Sunshine Strickland, aka Supergirl, went to City Hall in April 2017 to hold a one-person demonstration against police inaction on a physical attack she said that she experienced four months earlier. At that time, according to the lawsuit, sheriff's deputies intimidated her in an attempt to make her leave the premises and took her banner and backpack.

City Hall policy at the time did not allow for any protests without permits.

A second incident occurred in December 2017, when Strickland again went to City Hall to mourn Mayor Ed Lee, who died earlier that month. The same sheriff's deputy forced her away from City Hall and misgendered her, the lawsuit alleges.

Strickland was already in touch with lawyer Donald Wagda, who said that he went to City Hall to see the protest policy.

The suit was filed in September 2018 in federal court. The city announced in spring 2019 that it would be changing its policy — protests involving fewer than 10 people do not need permits, and up to 150 people can gather for "spontaneous expression in response to news or affairs coming into public knowledge less than 48 hours prior to that expression."

Wagda said that the new policy, which went into effect in October, is a victory for freedom of expression.

"It's a great benefit in response to breaking news to be able to show up at City Hall without a permit," Wagda said. "That's when people want to have their voice heard."

Strickland said she used the money — which she received weeks ago — to find housing and that she now lives in the East Bay.

Strickland said she adopted the "Supergirl" persona in response to the violent incident in January 2017, when she said a transphobic security guard at Dignity Health St. Mary's Medical Center attacked her. In an emailed statement to the B.A.R. Tuesday, a spokeswoman for Dignity Health said she could not provide comment "due to patient privacy rules."

"I'm really into superheroes and it's a symbol that gives me strength," Strickland said. "Donning a cape and going around town helping people, even putting myself in dangerous situations — it has made a difference."

Strickland said that she spoke for 10 minutes at the August listening session at the Glide Memorial Methodist Church in the Tenderloin, when San Francisco Police Chief William Scott apologized for the way police have treated members of the LGBT community.

She also said she had the opportunity to discuss it with Mayor London Breed, who Strickland said promised the city would do better going forward.

"Nobody should have to go through what I did," Strickland said. "The main thing is that the authority figures need to be put in check when they don't do the right thing."

The San Francisco City Attorney's office did not respond to a request for comment as of press time.