Violence breaks out at gay film premier in Georgia 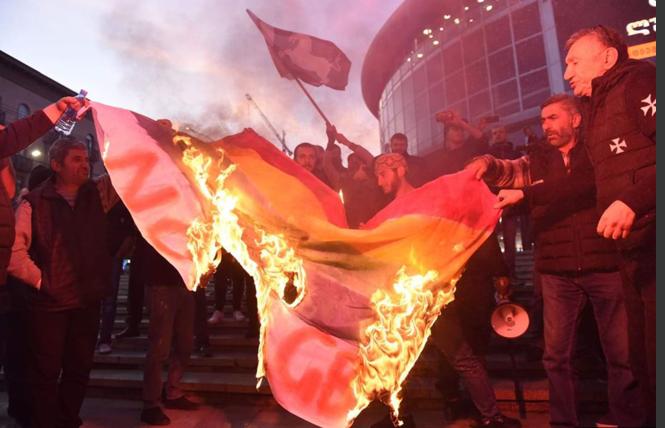 Anti-gay demonstrators burn a rainbow flag before the Tbilisi premiere of "And Then We Danced" on November 8. Photo: Courtesy RFE/RL

Anti-gay demonstrators and police clashed last week as violence erupted at the opening of the highly acclaimed Swedish gay romance, "And Then We Danced," in the former Soviet republic of Georgia.

Riot police held off hundreds of anti-gay demonstrators who surrounded the sold-out premiere of the love story about two rival male dancers at a variety of movie theaters in the port and resort city of Batumi and Georgia's capital, Tbilisi, November 8.

Radio Free Europe/Radio Liberty reported that anti-gay demonstrators in Tbilisi gathered outside of the Amirani Cinema chanting "Long live Georgia!" and "Shame!" before a rainbow flag was burned while an Orthodox priest recited a prayer.

Police arrested 12 protesters who reportedly attempted to storm the theaters showing the film. One of the 12 demonstrators was arrested for allegedly throwing a stone that hit LGBT rights activist Ana Subeliani. The others were charged with "delinquencies."

Subeliani was taken to the hospital.

About 100 protesters stayed until the end of the film, according to NBC News, which spoke with Lela Akiashvili, who works on gender equality issues at the United Nations Development Program.

No violent incidents occurred after the screening, the network reported.

Earlier this year, "And Then We Danced" was selected as the Swedish entry for the best international feature film for the 92nd Academy Awards in 2020.

Georgia decriminalized homosexuality in 2000. Anti-discrimination laws were adopted in 2006.

Despite the legal progress, society hasn't changed much regarding homosexuality.

The United Nations' LGBT expert reported that violence and discrimination against LGBT people is commonplace in Georgia.

Leading up to the premiere anti-gay activists and the Georgian Orthodox Church called the movie "revolting."

The anti-gay activists discounted the accolades that the movie has received or that it was filmed in Tbilisi.

Last week, Sandro Bregadze, a former junior minister in the ruling Georgian Dream party's government and leader of the Georgian March, a nationalist organization, attempted to stop the movie's screening, calling the film "propaganda of sodomy and foulness."

He attacked the film, stating it is "a striking example of gay propaganda that has no artistic value" and called people who wanted to see the film gay or "want to be gay," reported Pink News.

Georgia's Ministry of Internal Affairs promised moviegoers they would be protected, ensuring public safety and freedom of expression, in a November 6 statement to the media.

"Different groups of society have commented on the matter, threatening disruption of the movie projection," read the statement. The ministry "ensures the protection of public safety and order, as well as the freedom of self-expression (which, of course, corresponds to the frames of the law)."

In an interview with Screen Daily, Levan Akin, 39, the Swedish Georgian director of the film, called the threats "absurd."

"It is absurd that people who bought tickets need to be brave and risk getting harassed or even assaulted just for going to see a film," he said.

The director's goal was to "reclaim and redefine Georgian culture to include all, not just some," he told the media outlet.

"[T]hese are the dark times we live in," he posted on Facebook, adding that it is important to "stand up against these shadowy forces in any way we can."

Reuters reported that a lawmaker working on revising the penal code of the self-governing 15 South Pacific islands told the media last week the law would remain on the books.

Gay men can face up to seven years in prison for sodomy and five years for "indecency between males," if the law is enforced. Reuters reported that it is not.

Same-sex relationships between women aren't banned, according to Equaldex.

Australia and New Zealand have made significant advances in LGBT rights, while Taiwan legalized same-sex marriage in May.

The clause appeared to be dropped in a 2017 draft of the bill, however, religious leaders have been incensed by the proposal to decriminalize homosexuality on the Christian-majority islands.

"If we agree to decriminalize it, then it would seem that we are approving same-sex marriage," he told Radio New Zealand.

The council lobbied the Cook Islands select committee to reinstate the ban on homosexuality.

"We are remaining loyal to our Christian principles as we see them," Donoghue said.

Valentino Wichman, president of Te Tiare Association, an LGBT group, vowed to protest the law, calling it an "impingement on our constitutional rights as citizens of this country," in a statement to Reuters.

"Human rights are universal. Everyone is entitled to the same rights," he said.

The bill is scheduled to be presented to the Cook Islands' parliament in early 2020.

According to a news release from OutRight Action International, in 2016, when the mandate was created, an amendment challenging it was tabled at the Third Committee.

"This year, a record-high number of States supported the renewal of the mandate at the Human Rights Council in July, and the mandate was not challenged in the Third Committee. This is a clear indication that the international community is becoming both more aware and less tolerant of violence and discrimination on the basis of SOGI," OutRight officials stated.

The role of the LGBT expert is to document discrimination and violence against LGBT people around the world.

"The affirmation of this acute need by the Third Committee today, without challenge, is a reminder of the universality of human rights, and a testament to the strength and resilience of LGBTIQ people everywhere coming out and standing up for our right to be who we are," said Jessica Stern, executive director of OutRight International, in a November 7 statement.

Madrigal-Borloz is scheduled to visit Sri Lanka in 2020 and has tabled 12 requests for as many country visits.

Global LGBT advocates urged governments to cooperate fully with the U.N. LGBT expert and to work on ending discrimination and violence against LGBT people.