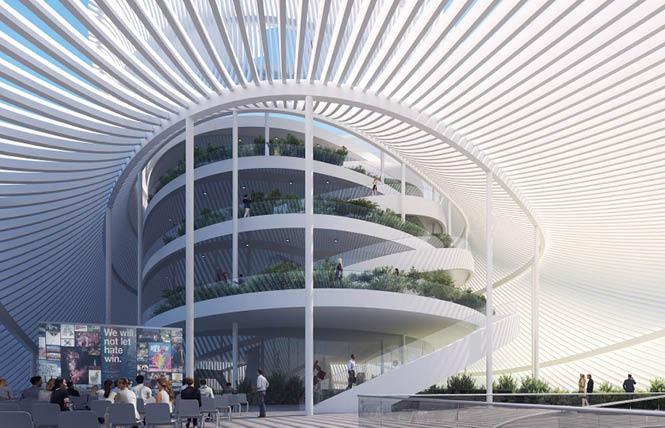 The onePULSE Foundation has announced the results of a competition to design a memorial and museum in honor of the victims of the 2016 massacre at the Pulse gay nightclub in Orlando, Florida — even as it faces some opposition to the proposal.

The design concept is from the French architectural group Coldefy & Associés in association with six other participants, according to a news release from onePULSE.

Brandon Wolf, an LGBT activist and survivor of the Pulse massacre, said he was moved by the design.

"Will admit that I was brought to tears seeing the design," Wolf wrote in an email to the Bay Area Reporter after the October 30 announcement. "The designs for the memorial and museum are truly world class. It's clear that care was taken by the team to create something that captures the scale of the impact of the tragedy and also does right by the culture of light and hope that has come in our recovery."

The memorial will be on the site of the nightclub, which closed after the massacre. It will feature a garden of 49 trees to commemorate each of the 49 victims, along with a palette of 49 colors, according to the release.

One of the architects, Zoltan Neville of Coldefy & Associés, wrote in an email to the B.A.R. that he and his colleagues "to contribute to this collective effort to reclaim a place from terror and darkness and create a new reality of joy, unity, and love."

He said that one of their main focuses was to make sure the design was "full of life."

"Natural elements such as greenery, water, light, and air played a fundamental role in our design approach," Neville wrote. "These natural elements touch the senses and tie the different design components together, linking the project to the beautiful existing features of the neighborhood."

Only one-third of a mile away from Pulse there is a museum planned that will house around 7,000 artifacts from Pulse and specifically from the night of the killings, according to Adam Miller of the onePULSE Foundation.

The museum, which will be 30,000 square feet, will also house 225 oral histories from people who were affected by the massacre and include a performance space, according to Miller.

"My hope is that the museum not only captures the story of Pulse and the Orlando community, but that it tells the broader story of how the LGBTQ community has endured hatred and persecution throughout history," Wolf said.

There were 68 submissions from 19 countries in the contest for the winning design, which began in March, according to the release.

Omar Mateen went on a rampage June 12, 2016 when he stormed the club during its popular Latin Night. In addition to the 49 deaths, another 53 people were injured. Mateen died in a shootout with police. In 2018, his wife, Noor Salman, was acquitted of providing material support to a foreign terrorist organization and of obstruction of justice in connection with her husband's attack.

Orlandoans will have some time soon to provide comments on the design, which potentially will lead to changes. It has already received some negative feedback from the Community Coalition Against A Pulse Museum, which said it is against turning the location of the massacre into a "tourist attraction."

"A $40M+ museum is not the most effective way to support survivors, memorialize our loved ones, educate people about the complex issues surrounding the Orlando shooting, or strengthen and empower Orlando's diverse communities for change," the coalition posted on its website. "Grassroots organizing and strengthening our current educational institutions can accomplish these goals."

Christine Leinonen, whose son, Christopher Andrew Leinonen, died in the massacre, helped to start the coalition. She described the project as "commercializing gay death" and said it was inappropriate that Barbara Poma was gaining notariety as head of the foundation when, as the owner of the nightclub, she had inadequate security the night of the shootings and "illegal renovations."

"Everyone in Orlando smells money like crazy," Leinonen said in a phone interview with the B.A.R. "They're trying to appeal to my ego. Of course I want my son's story to be told, but it's like, this owner is trying to capitalize."

Leinonen said that she wants to see more money for the survivors and for the victims' families. She joined other plaintiffs in filing a negligence lawsuit against Poma, which is ongoing, Leinonen said.

When the B.A.R. asked for a response to Leinonen's accusations from Poma, onePULSE responded with an emailed statement.

"Everyone is certainly entitled to their own perspective but it's disappointing to see such extreme mischaracterizations and false accusations," it reads.

When asked about the coalition's opposition to the memorial, onePULSE said everyone "should be heard" in an emailed statement.

"Everyone is certainly entitled to their own perspective, most especially those directly affected by the tragedy at Pulse," the statement reads. "The not-for-profit onePULSE Foundation remains focused on its mission to create and support a memorial that opens hearts, a museum that opens minds, education programs that open eyes and legacy scholarships that open doors."

The memorial and museum have an estimated completion date of 2022 at a projected cost of $45 million, of which $16 million has already been raised, according to onePULSE.

Neville said that he hopes people come away from the memorial and museum with a better understanding and respect for the victims and their families.

"We want the project to give back to the community, and to set a powerful precedent by transforming a tragedy into a positive act, actively inspiring local and global communities today and for generations to come," he said.

For his part, Wolf hopes that the project will help keep alive the memory of the lives lost that day.

"The greatest fears we have when we lose someone are that we will forget them and that the world will never know them. This project will keep the memory of my best friends alive in a way I never imagined possible I can't wait for the world to learn about Drew, Juan, and the 47 other victims," he said, referring to Juan Ramon Guerrero and Christopher Andrew Leinonen.

"And I can't wait to share how, in their honor, this community chose love over hate," Wolf added.