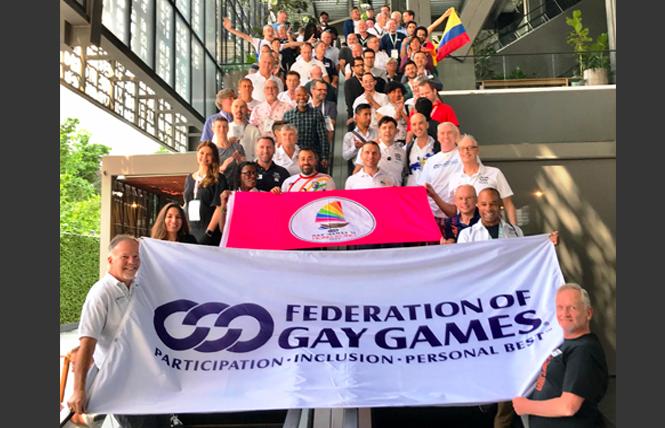 The weather in Guadalajara, a city high in the mountains of western Mexico, is generally pleasant and mild, but subject to occasional, unpredictable outbursts of stormy weather, full of thunder, lightning, and torrential downpours. That made it an appropriate location for this year's Federation of Gay Games membership assembly meeting, which started with forecasts of contentious debate and evolved into a relative calm of courage and cool-headedness.

Before the three-day meeting began October 31, several delegates of member organizations, concerned about the social unrest in Hong Kong that has been intensifying during months of sometimes violent pro-democracy protests, were hoping the FGG board of directors would discuss with them back-up plans and a timetable in the event the 2022 Hong Kong Gay Games need to be moved or canceled.

But when the agenda was finally announced on October 20, just 10 days in advance of the meeting, two Hong Kong meetings were scheduled between the FGG assembly and the Hong Kong organizers, but none between the FGG membership and the FGG directors. That greatly limited opportunities for internal FGG discussions.

During what opportunities for comments and questions there were, a few alarms were sounded.

When Hong Kong 2022 spokesman Nigel Lee mentioned a world professional rugby event was still scheduled to be held in Hong Kong, basketball delegate Mark Chambers responded, "The difference with rugby is those athletes are being sponsored to go there. The athletes I am trying to recruit are saving their money now to pay their own way. What if another Tiananmen Square happens? What is the Plan B if something did happen?"

Said Laura Moore, an FGG honorary life member and delegate for figure skating, "I have no concern about you canceling the event. I have a fear the registration numbers will not be there."

Hong Kong organizers responded to such concerns with calm resolve to carry on. They acknowledged the troubling demonstrations, social disruptions, and violent confrontations. They also pointed out that many events have been canceled, mostly mainstream events, but many others were not canceled and others still plan to proceed. The FGG directors indicated that they will keep track of events, but as things stand now, they fully intend to carry on and will not spend any bandwidth considering alternative plans.

Paris 2018 finances
The testiest discussions came during the FGG annual financial report. Many organizations came in with feathers already ruffled by Paris 2018's post-game reports the questioned the value of their contributions and assistance.

I wrote about those reports last summer. It took no great journalistic sleuthing for me to find them: they were emailed to me unsolicited by one of the directors of the Paris 2018 organizing group. The recipients were listed as "undisclosed," but I often get such emails from the volunteer work I do with several LGBT sports groups, so I did not think much about it.

Turns out that neither I nor any of the organizations that responded to me with their comments and rebuttals were ever supposed to see the reports, which were drafted for the FGG board of directors and reportedly had not received final Paris approval.

So several organizations came into the meeting already miffed, and emotions were even more heated when they learned that although Paris ended with a sizable surplus, it was not shared with the FGG.

In April, Paris 2018 co-president Manuel Picaud told the Bay Area Reporter that the organization had a surplus of almost 150,000 euros ($168,000) and raised another 200,000 euros for its legacy community foundation. At the time, FGG co-president Sean Fitzgerald said division of the surplus was an ongoing discussion.

The discussion, it turns out, did not go well with the FGG. There was an ambiguous clause in the license agreement about the post-games division of any surplus. The French interpreted the clause to mean that it was meant only to cover the surplus in the final year rather than after the final year. The final year, of course, is when the host must lay out most of its costs for operations, venues, services, and so forth.

There is a legal principle that when a contract is ambiguous, the ambiguity must be interpreted against the party that wrote the contract, in this case the FGG. The federation said it considered suing, but was told by legal advisers it would probably lose. Hence the federation lost out on the bounty it helped produce.

The FGG said the ambiguity was corrected in the Hong Kong contract.

Impressions
Here are my impressions and observations from the meeting, based on what went on during sessions and what I heard from informal exchanges with organizers, directors, and delegates:

1) There is organizational agreement on committing fully to Hong Kong, but uncertainty remains whether that will translate into member LGBT sports federations' ability to recruit sufficient numbers of queer athletes to make the Gay Games look and feel like a Gay Games. There are barely any LGBT sports organizations in Asia to draw on, so regional recruitment will likely be largely dependent on appealing to non-athlete members of the Asian LGBT population and straight allies from the greater Hong Kong community. Marketing to the global LGBT athletic community may be the biggest challenge Hong Kong organizers will face. When it comes to recreational athlete recruitment, perception is as critical as reality.

2) The interpretation of the Paris contract that only local organizers would enjoy the fiscal rewards from years in which they benefited from the efforts of the FGG and its member organization is illogical, parochial nonsense. It does little to serve the international human rights sports mission to which both organizations were committed. It breeds cynicism in supporters who were already burned by Paris' snubs of their organizations. Here's hoping those bad feelings do no sour future host relations.

3) Kudos to Guadalajara for remaining engaged after losing its bid for 2022, and kudos to the FGG for reaching out to LGBT sports representatives from throughout Latin America to bring many of them in to see how the FGG works. That's the way to build global participation and should yield long-term dividends in building the mission throughout Central and South America. The Latin American outreach was far and away the emotional highlight of a positive, energized annual assembly.

4) Technology — and the skilled volunteers needed to maintain it — remains the biggest logistical challenge for the FGG. The instability and inconsistency of the FGG website and social media platforms was a liability throughout the past quadrennial cycle and must be remedied for this and future cycles. Without them, the ability for the Gay Games to reach and engage athletes across the globe, especially in repressed and underrepresented areas, is critically hampered.

5) A major global event that can regularly draw 10,000 loyal participants should be able to land and hold on to a major sponsor or two — but the Gay Games so far have failed to do just that. There is a renewed effort and vision in the FGG to do so. If the organization succeeds, it will become less reliant on hosts for revenue, be able to provide better support for hosts, and engage communities currently beyond its global reach. Right now the FGG needs tunnel vision to stay focused on technology and sponsorships to ensure long-term success.

6) Think folks have lost interest in the Gay Games and, after the Miami Outgames fiasco, have lost faith in LGBT international multi-sports events? Guess again. The FGG reported 24 cities have already expressed interest in the 2026 Gay Games (the 2022 Gay Games had only 11 suitors). The meeting had 130 attendees representing 23 countries.

7) In 2007, the FGG launched a new organizational structure to address a toxic internal culture and instability in its governing board. Under the new structure, member organizations retained voting rights but surrendered their board status. That created a communications disconnect between the board and the membership, which was reflected going into the meeting by the Hong Kong issue. That issue was obscured by lack of information, communication and transparency. If the federation is to maintain its status as a major force on the LGBT sports world, it must develop more frequent and candid two-way discussions with its membership outside the annual meetings. It ain't a community if it ain't talking.

Trans athlete in mediation with powerlifting group
Gender Justice says the advocacy group and transgender powerlifter JayCee Cooper have agreed to join in mediation with USA Powerlifter to attempt to resolve the discrimination complaint the athlete filed earlier this year against the sports group with the Minnesota Department of Human Rights.

Cooper and Gender Justice filed a complaint in early June with MDHR, saying that USA Powerlifting's policy, which focuses on testosterone levels in barring athletes from competition, violated state nondiscrimination law on the basis of gender and gender identity.

In a Facebook posting October 30, Gender Justice said the organization "believes firmly that JayCee Cooper — and all transgender athletes — should have an equal opportunity to compete in the sports they love. We welcome this opportunity to meet with MDHR to discuss basic fairness, equality and inclusion in sports."