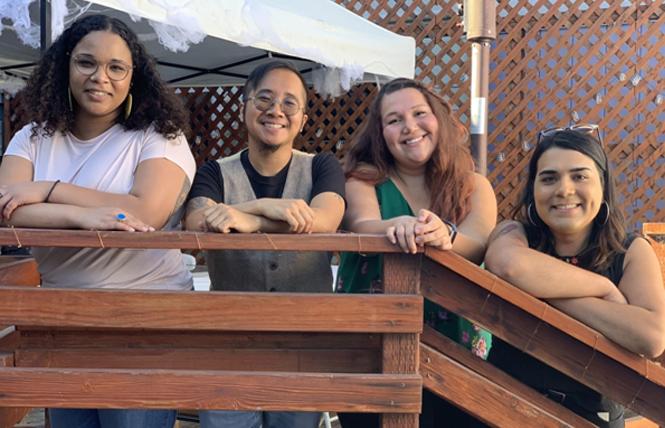 The LYRIC school-based initiative team includes, from left, Amara M., Jamil Moises O., Felicia R., and Frida I. According to a spokeswoman, LYRIC's policy is to list people with their first name and last initial for confidentiality reasons. Photo: Courtesy LYRIC

San Francisco will be funding middle school groups for LGBT youth $1.135 million more than the previously budgeted figures over the next five years.

The funding is through the city's Department of Children, Youth and Their Families.

The youth groups, called Q Groups, are in many San Francisco Unified School District middle and high schools and are often run in coordination with the Lavender Youth Recreation and Information Center, or LYRIC, an LGBT youth organization that lobbied for the money.

Q Groups meet at lunch or as an elective and help students who are recommended to "build awareness and pride and confidence in who they are," Erik Martinez, a queer man who serves as SFUSD LGBTQ programs coordinator, said in a phone interview with the Bay Area Reporter.

"The positive impact of the program is due to its design," Martinez said. "Q Groups work under the umbrella of our district core supports provided by K-8 school social workers and high school wellness centers. These linkages to mental health support in schools and referrals to community services."

Natalia Vigil, LYRIC's communication and development director, said that Q Groups have proved extremely beneficial to LGBT youth in the city, leaving them more confident and ready to stand up for themselves.

"Every week they cover a diversity of topics — everything from healthy relationships to gender identity," she said.

According to a news release, the middle school group model includes working to increase safety and self-esteem for LGBTQ students and connect them with gender-affirming health and wellness support.

A 12-year-old student identified only as V said in the release, "Q Group has really helped me. You are surrounded with people who actually believe in you and want you to succeed."

According to LYRIC statistics, over 85% of the middle school participants — there were 62 last school year who attended 148 sessions — in the Q Groups said they were proud to be part of the LGBT community, reported "having a positive LGBTQ role model in my life who I can talk to," and reported "knowing what it means to be in a healthy relationship."

Seventy-three percent said they were comfortable seeking out information and support services about sexual orientation-related matters.

Vigil said that the additional funding was secured through the mayor's office, as helping LGBT youth is a mayoral priority.

"This funding for LYRIC's Q Groups is part of our citywide commitment to provide youth — especially those who are most likely to experience homelessness, bullying, and violence — with the mental health services and other support they need to lead healthy and happy lives," Mayor London Breed said in the release.