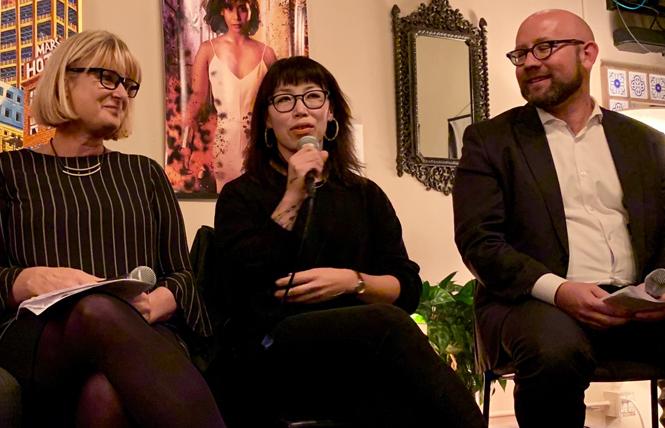 While the tech industry continues to boom, San Francisco's small businesses are fighting to stay alive.

That was one of the conclusions of a panel of small business people held October 29 that was sponsored by the United Democratic Club. The panel was entitled, "The Cost of Doing Business: Can Small Business Survive in San Francisco?"

Referring to Manny Yekutiel, a gay man and owner of the eponymous year-old cafe in the Mission district where the event was held, Mandelman said, "business owners shouldn't have to be as superhuman as Manny is to survive" in San Francisco. Yekutiel "has worked his ass off" to schedule excellent programming, said Mandelman.

According to Mandelman, small business owners in the Castro say their biggest challenge is that they "don't know who is going to come in through the front door." Panel members described incidents where people with substance abuse or mental health issues threw things at workers or customers and disrupted business.

A recent Board of Supervisors hearing presented an "alarming picture" of the state of the restaurant industry, with more restaurants closing than opening in the city last year, he added. With many different issues contributing to the difficulty of running a restaurant, said Mandelman, some can be "difficult" to discuss because they involve the "equity and rights" of local residents as well as those living on the street in the neighborhood.

In addition to the financial burden of minimum wages and contributions to health insurance, owners of restaurants typically face the expensive process of meeting city regulations to become licensed. "Working their way through the bureaucracy" can add up to high costs before a business is even open, he said.

Mandelman said the board is "looking at" various fees that could possibly be reduced or eliminated through legislative waivers.

While the city is the center of the technology boom, ironically city government it not "tech savvy," said Mandelman. Departments, including building inspection and planning, are trying to establish computer systems that can track permits, he added.

Mandelman said that many legislative proposals with potential to improve neighborhood conditions "die because we are paralyzed" with distrust of each others' intentions. For example, he said, the city has been unable to successfully address the dramatic increase of people "camping" outdoors; the conversation about the topic was taken over by a small number of people with loud voices opposing stricter enforcement.

The establishment of a meth sobering center is one idea with potential to improve conditions, he said. That was recommended last month by the city's meth task force, which Mandelman co-chaired with gay city Health Director Dr. Grant Colfax.

Stacy Jed, president of the board of directors of the Golden Gate Restaurant Association, said that last year, 325 restaurants in San Francisco closed, with only 298 opening, a trend that began two years ago, after decades of more restaurants opening than closing in the city.

Restaurants are facing challenges "they have never seen before," said Jed. Compared to tech companies — where the business gets to keep, on average, 60%-85% of revenue, restaurants operate on slim profit margins, typically 3%-5%, "if you're good," Jed said.

Restaurants that fail do so for "myriad of reasons," she said, including inexperienced owners and managers and poor concept. Most restaurant owners want their workers to have a healthy "live work balance" and good health care "but there are limits to what we can do" and still survive, she said. Restaurant costs are "outpacing their income," she said, noting that large "prominent" restaurants are "equally challenged" when compared to smaller little known places.

As an increasing number of restaurant workers move to less expensive cities, owners must figure out a way to bring "creativity and excitement" to the industry. Long term, the city must build affordable housing but in the meantime, other solutions are necessary, she said.

Darolyn Davis, chief executive officer at Davis and Co., a public relations firm, urged the city to update its regulations involving small business. Davis pointed to San Francisco's Chapter 14B, the Local Business Enterprise Ordinance. It passed 20 years ago to maximize opportunities for local small businesses to compete for city contracts and sets aside certain public contracts for micro local businesses. Davis said the ordinance must be changed to raise the maximum revenues a company could have to qualify, because many firms have been disqualified as their revenues made them ineligible, forcing them to either go out of business, move to other cities, or keep their revenues below the threshold so they would continue to qualify to participate in the program.

Davis, the daughter of retired Bay Area journalist Belva Davis, said that while companies offering professional services are "overwhelmingly" in support of an update to the legislation, they haven't had much success in convincing a legislator.

"Walk with me" in City Hall to impress supervisors of our need, she urged.

Angel Davis (no relation to Darolyn), co-owner of the Fig and Thistle wine bars, including one in the upper Market, said that in addition to having heavy objects thrown at them, one of her colleagues has been repeatedly threatened with rape by a man who comes into the shop.

"Nothing can be done," she said.

When the audience was asked to comment or question the panel, two gay business people — Terrance Alan, owner of Flore Cafe and the proposed Flore Store and Steven "Stu" Gerry, a commercial Realtor with Zephyr and the former owner of Cafe Flore, offered their opinions.

Gerry said that he typically has a total of 10-12 commercial listings for sale but now has 34, including 11 in the Castro.

For small businesses to succeed in San Francisco, the city is going to have to "act on the low hanging fruit," which Gerry said included "dirty streets filled with drug addicts." Restaurant workers "are worried about getting home safely" after their shifts, he added.

Many tech companies offer workers free meals, a practice that also hits the bottom of line of local restaurants, he said.

"The city needs to plan for the future, not the past," Gerry said.

"People who aren't mentally capable of being on the street must be taken off the street" until they are capable, he added.

Gay tech guru: 'Yes I Am: The Ric Weiland Story'