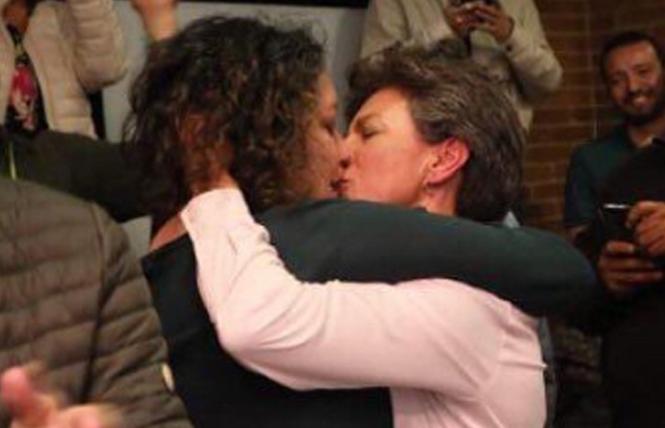 Claudia Lopez made history last week after being elected the first-ever lesbian and woman mayor of Bogotá, Colombia.

The 49-year-old former senator and 2018 vice presidential candidate with the Green Alliance Party captured 35.2% of Bogotá's vote October 27, winning a narrow victory against her closest rival, Carlos Fernando Galan, a 42-year-old independent candidate, who received 32.5% of the vote.

An estimated 2.8 million people out of the city's 5.8 million eligible voters turned out at the polls in one of Bogotá's largest and most peaceful elections in recent history, Juan Carlos Galindo, director of the National Civil Registry, told the City Paper Bogotá.

Being mayor of Bogotá is regarded to be the "most powerful position" in the South American country following the presidency, reported Reuters.

Speaking to a crowd of jubilant supporters after accepting her victory, Lopez called Sunday the "day of the woman."

"This is the day of the woman. We knew that only by uniting could we win. We did that. We united. We won. We made history!" she said, adding that it was a "small step" for her, but for "Colombian women this is a huge step forward."

"A lavender ceiling was shattered in Colombia Sunday night and its effects will reverberate around Latin America," Imse said in a statement announcing Lopez's win on Monday.

The institute has dubbed 2019 the year of the lesbian mayor because of the unprecedented number of lesbian mayors elected to big cities in the United States, and internationally. He said Lopez's win serves as inspiration for other LGBTQ politicians around the world.

Other lesbian mayors elected this year include Lori Lightfoot in Chicago; Jane Castor in Tampa, Florida; and Satya Rhodes-Conway in Madison, Wisconsin.

"It's a guarantee that Claudia will defend equality, the equal rights we've achieved, and that equality isn't up for discussion," Castaneda told Reuters.

Reuters reported that at least nine other openly LGBT candidates were elected to local positions.

Current and former politicians backed Lopez, as did women and LGBT voters. Her campaign was also fueled by her anti-corruption agenda, reported the local newspaper. Reuters noted that she did not focus on LGBT rights during her campaign.

Lopez was captured kissing her partner, Angélica Lozano Correa, a fellow Green Alliance Party member and Colombian senator, during the celebration in a photo by Renata Segura, associate director of the Conflict Prevention and Peace Forum and a friend of the couple, that circulated on Instagram.

Lopez focused her campaign platform on her longtime battle against corruption. The Associated Press reported her work as a researcher at New Rainbow Corporation (Corporación Nuevo Arco Iris) uncovered the "so-called para-politics scandal" that "link[ed] scores of high-profile politicians to violent far-right militias." The evidence was eventually one of the pieces cited by the country's Supreme Court that brought down many politicians.

Lopez survived death threats that forced her to abruptly leave Colombia at one time. At the beginning of her tenure as senator in 2014, a fellow legislator dismissively referred to her as "Mr. Lopez," reported the AP. The reference still circulates on homophobic social media posts.

During her victory speech, Lopez reiterated her campaign promises to improve infrastructure and the quality of life for Bogotans.

"Bogotá voted so that through citizen culture, quality education, and equality we will defeat, overcome, and unlearn machismo, racism, classism, homophobia and xenophobia," she told the crowds Sunday evening.

"I will unite Bogotá and govern for everyone," she said, reported the City Paper.

During her speech, Lopez thanked Lozano for "being the love of my life, and making me happy every day."

The eldest of six children who worked her way through school with assistance from financial aid and scholarships, according to ABC News, Bogotá's new mayor-elect holds a degree in finance and international relations from Universidad Externado in Bogotá along with a master's in public administration and urban politics from Columbia University in New York and a doctorate in political science from Northwestern in Chicago.

Lopez will be sworn into office January 1.

At the same time, abortion also became legal in the country.

The Guardian reported that same-sex couples stayed up until midnight when the law went into effect and celebrated like it was New Year's Eve with proposals to their sweethearts.

The first same-sex weddings are expected to begin the week of Valentine's Day, Northern Ireland's Secretary of State Julian Smith told the Guardian.

However, former Democratic Unionist Party health minister Jim Wells is attempting to turn back time, or at least put a damper on the newly won rights.

Wells is calling for a referendum on same-sex marriage and abortion, saying he wants the people of Northern Ireland to decide the two issues.

The DUP has continued to block same-sex marriage and abortion in the Stormont assembly, which originally sent the bill to Westminster where the party continued to fight the legislation.

Pink News reported that Wells claimed Westminster forced same-sex marriage and abortion through in an hour "without prior warning and no consultation," following the party's failure at an attempted recall to block the extension.

In July, members of the House of Commons voted in favor of both same-sex marriage and abortion, 383-73 and 332-99, respectively, reported the Independent. The laws were set to go into effect by midnight October 21 if Stormont wasn't restored.

"They were forced through late at night by others who had little or no understanding of the values of the people of this part of the United Kingdom," Wells argued, reported the Belfast Telegraph.

Pink News noted that Alliance for Choice co-convener Naomi Connor stated Wells "chose to ignore" the bills, which went through the normal legislative process of three readings and debates, in which he was in attendance, to become law.

The center is a vision of Rodriguez, 36, who represents Guayaquil and also heads Silhouette X Association, a transgender organization that is based in the city.

Guayaquil is the gateway to the Galapagos, the UNESCO World Heritage eco-tourism site.

The newly opened center is taking Ecuador's LGBT community's six-year battle against the proliferation of so-called conversion therapy clinics to the next level. Co-coordinated by Rodriguez, the center's staff plan to respond to the needs of transgender victims of the widely debunked and harmful practice of "curing" homosexuality and gender dysphoria, as well as protect and advocate on behalf of potential victims and survivors.

According to Silhouette X Association, lesbians and poor transmasculine individuals have been most affected by conversion therapy, with the latter subjected to kidnappings and torturous practices at clinics.