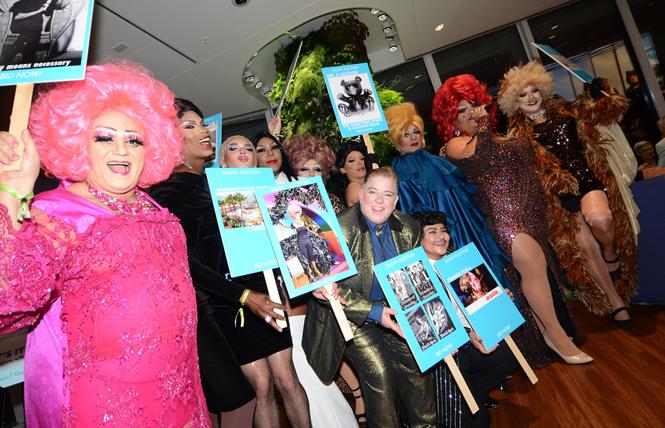 Based on the findings of a feasibility study it had conducted, the GLBT Historical Society is narrowing its search for a site to build a full-scale LGBTQ Museum and Research Center to San Francisco's LGBT Castro district.

As recently as last month, leaders of the archival group had told the Bay Area Reporter that a location in the city's South of Market neighborhood, long home to LGBT people as well as bars and businesses catering to the leather community, was a possibility. But having digested the 142-page report from the consultants it worked with, the archival group has determined that it makes the most sense to locate the museum project somewhere in the city's main gayborhood.

"The big question people always ask is where is it going to be," said GLBT Historical Society Executive Director Terry Beswick. "Honestly, with these feasibility studies we clearly answered we need to be in a gay-identified neighborhood. We really want to be in the Castro if at all possible."

The study was split into two reports, with one devoted to the economic feasibility of the project. The other looked at various scenarios for combining a museum and archives in one building or housing the two entities at separate locations.

An admission price of $18 is suggested, with total admission revenue pegged at $954,000. The overall takeaway from the reports, said Beswick, is that the project is financially doable.

"The exciting thing for me is they really create a business plan that shows we can operate and sustain a full-scale museum in San Francisco," said Beswick.

The 34-year-old archival group currently stores its vast collection of materials documenting the history of the LGBT community in a leased space downtown on Market Street. It also operates a 1,600 square foot museum on 18th Street in the heart of the Castro in a storefront it has leased through at least 2022.

For this year's LGBTQ History Month, the B.A.R. asked the historical society to delve into its archives and select objects it envisions could one day be used as the centerpieces of exhibitions in a future, permanent museum. Most of the items featured in the five-part series, which wraps this week with a story focused on LGBT political ephemera, have yet to be put on exhibit for the public.

At the archival group's recent annual fundraising gala, held October 18 on the Ohana Floor atop Salesforce Tower, San Francisco Mayor London Breed pledged her support for the new museum project. It was the first time she had done so before a public audience, said Beswick, since voicing her backing of the project during an editorial board meeting with the B.A.R. ahead of her election in June last year to serve out the term of the late mayor Ed Lee.

Seeing a permanent LGBT museum open in San Francisco is "long overdue," Breed said at the event, which raised more than $100,000 for the historical society's operating budget this year.

"We know we need a place in San Francisco," Breed said. "Building out a museum — and curating and documenting (LGBT history) — is critical to the success of San Francisco." 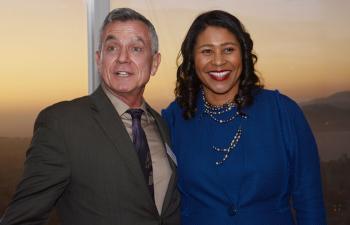 Breed noted that when the historical society has applied to the city for funding, "we've been there with support. We will continue — in my administration — to look at this through an equity lens."

Beswick said the public commitment for the museum project from the mayor, who is expected to easily win her race for a full four-year term on the November 5 ballot, was a year in the making. He was scheduled to meet with leaders of city agencies this week to present the findings of the feasibility study and discuss next steps.

"We can, in San Francisco, in this economy, support a full-scale museum," he said. "The problem is a building, facility, land. That's why the mayor's support is so important."

It will be only the second LGBTQ museum of its kind in the world and the first standalone LGBTQ museum to be built in the United States, noted Beswick in his remarks at the gala.

"In San Francisco and the United States, we do not have a museum — outside Berlin — dedicated to LGBTQ history," he said. "To me, it's important because of the kids. Still, we have kids in San Francisco who don't have a sense of belonging, who have no sense of their history — their heritage."

Rendering
A rendering for the new museum included in the feasibility study is based on the interior of the vacant retail location that previously housed Pottery Barn at the corner of Castro and Market streets. But there is no guarantee that site, which is reportedly valued at upward of $16 million, can be acquired by the historical society for its museum.

A key recommendation in the feasibility study is for the historical society to remain open to different locations and siting scenarios as it pursues the project. As the consultants from AECOM note, a parcel of the size required for a dual museum and archive building is "not often available in the neighborhoods that would be the most logical fit" for the project.

"The foundational goals for the expansion and relocation can be realized in a number of different ways, and it is important to acknowledge that the flexibility to take advantage of a good opportunity that meets timing, location and cost needs may play as important a role as square footage projections," states the report.

The study cost $110,000 with $30,000 paid for from city funding and the rest from money awarded to the archival group by the state of California. Gay state Senator Scott Wiener (D-San Francisco) pledged his ongoing advocacy in the Capitol on behalf of the museum project and the nonprofit in general.

"I have always been a strong supporter of funding for the historical society. I will continue that advocacy," Wiener recently told the B.A.R. "Yes, I would like to see the state help with their museum."

In an interview about the findings in the reports, Beswick told the B.A.R. that the nonprofit is exploring with city officials the possibility of combining the museum project with a housing development, similar to the currently under construction project that will see housing combined with a new home for the Mexican Museum at the corner of Mission and Third streets.

"Our next step really is finding a site and finding a partnership that would work and make sense," said Beswick, who stressed that, "We still don't have a building and we don't have the funds to purchase or build our own building."

In 2020 Beswick said he hopes to have a better idea for where the museum could be located and how much of a capital campaign the historical society will have to launch.

For now, said Beswick, the nonprofit plans "to focus our efforts and the city's efforts on A: finding a site, and B: a developer to work with us so we can flesh out those questions," he said.