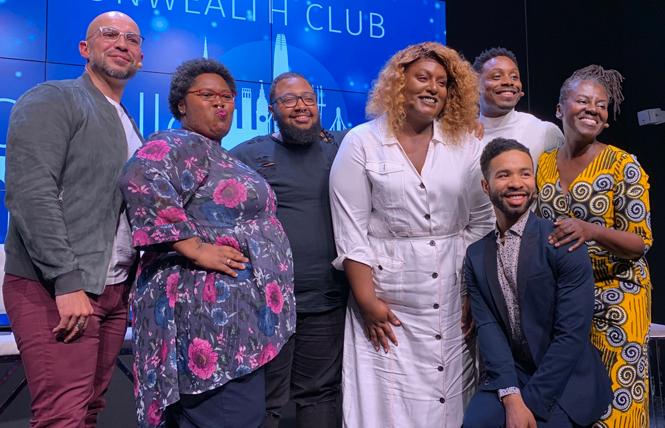 The LGBT community gives lip service to black people, while remnants of anti-black attitudes and behavior still remain, according to a panel of black queer activists.

Speaking October 25 at the Commonwealth Club of California, the panel, "When POC is not enough: Anti-Blackness in the LGBTQ Community" was sponsored in association with Compton's Transgender Cultural District, www.ColorBloq.org, and "The Michelle Meow Show," which has a partnership with the club.

The panelists explored the ways anti-black attitudes affect them in navigating spaces in the community and discussed ways LGBTQ folks can work together to uplift each other, regardless of race, gender, identity, gender expression, or anything else.

Panel host Aria Sa'id, a transgender woman who is a founder and executive director of the Compton's district and founder of the Kween Culture Initiative, warned the audience that the evening's conversation "will be uncomfortable" and may not have a "happy ending."

While working in city government, Sa'id said she was accused of participating in "oppression Olympics" when she suggested programs to help black transgender women.

Sa'id also said that when she arrives at a social event and looks around and doesn't see any other black people, "I instantly feel isolated." At social gatherings, Sa'id said she often spots black performers but rarely other black invited guests.

In describing "anti-blackness," panelist Socorro Moreland, a transgender activist and founder of #brotherhood, defined it as "a deep-rooted hate for a people" based on someone's perceptions of the group.

While attending Berkeley High School, Moreland said he was "taught to be everything ... except black."

Such perceptions lead people to "love everything about us, except us," he said.

Another definition of anti-black was offered by Tuquan Harrison, a queer cisgender man who is an LGBT policy adviser at the San Francisco Human Rights Commission.

He said anti-blackness is a system of "global oppression" in which "black folks" are on the bottom and continue to be pressed down. Using the term "POC" (people of color) when referring to someone who is black "feels like an erasure," he said.

Corey Baker, a same-gender loving cisgender man who is a librarian, performing artist, and empowerment advocate, urged people facing anti-blackness to "push back" toward gaining equity. The notion that everyone should be treated "the same" is wrong, he said. Instead, it's important to find out what a person needs "to feel welcome" and try to offer that.

Kin Folkz, a nonbinary queer person who is CEO of Spectrum Queer Media, a media educator, human rights activist, and founder of Oakland Pride Creative Arts and Film Fest, said in the English language, the word "black" often represents something "sinister or dark."

The language, they said, "teaches us to prejudge," quoting the prejudicial saying, "if you're brown, stick around; if you're black, step back."

Folkz said the use of the term "POC" "feels like a move away from blackness," noting that people with deeper skin pigmentation are often stigmatized. When black people hear others using the term "POC" to describe black people, "we might think it's not a safe" space, they added.

Folkz described a party they attended, when one of the attendees turned to them with a dirty plate, mistaking Folks for a service person. Folkz put the plate on a cart for dirty dishes and returned to the group.

When a black person walks into a room with all white people, they may be reminded that they "can never be the norm for success, genius, and excellence," qualities that are rarely used to describe black people, Folkz added. Sharing that experience with another black person in the room is "like being at a family reunion," they said.

An audience member asked why it is so hard for a 15-year-old black person to find a relationship. Folkz said that San Francisco does not have enough spaces where young people can meet, suggesting that activists should try to create "youth-led" events.

Another audience member asked how individuals can "cultivate black liberation." Nia Ibu, a queer cisgender woman who is a clinical therapist, healer, and activist, said that in her work as a therapist, when developing a business model, she is able to decide who she wants to work with. When black people work together, she said, "we can reinforce being black in a culture that society oppresses."

"We need to validate and mirror each other," she added.

A member of the audience, Pax Ahimsa Gethen, a black agender person who is a blogger and photographer, told the Bay Area Reporter in an email why they came to the event.

"As a queer black trans person, I have too often seen the presence of 'POC' used as an excuse for an absence of black folks in an organization — especially at the leadership level," they wrote. "Black folks bring different perspectives from people of other races and ethnicities, and while all people of color experience marginalization and oppression, anti-black racism is a unique experience. I was glad to hear the perspectives of people from the community on these issues."

Reflecting on the event, Sa'id wrote in an email to the B.A.R., "It was amazing to witness so many people participate in the conversation. We know conversations like these can be uncomfortable and they facilitate a 'paradigm shift' and I think the whole panel prepared for more polarizing questions — so the questions from the audience at the event, I think, were focused on 'how can we change this?' which was heartwarming."

Sa'id added that she hopes audience members and listeners increase their awareness on language they use.

"The experiences of black people especially in San Francisco — with outmigration of black/African Americans in a city that once had seven times the population 30 years ago than we do now — I left wanting people to think critically about acknowledging institutional and social disenfranchisement of black community — but in LGBT community specifically," Sa'id added. "I also wanted LGBT nonprofits to have an intentional commitment to addressing ways in which LGBT institutions have used black queer and transgender disparity as a funding model — without appropriately centering or creating pipelines for black queer and transgender leadership."

Updated, 10/31/19: This article has been updated to correct caption information, the gender identity preference of Pax Ahimsa Gethen, and ColorBloq.org to avoid confusion with another organization.