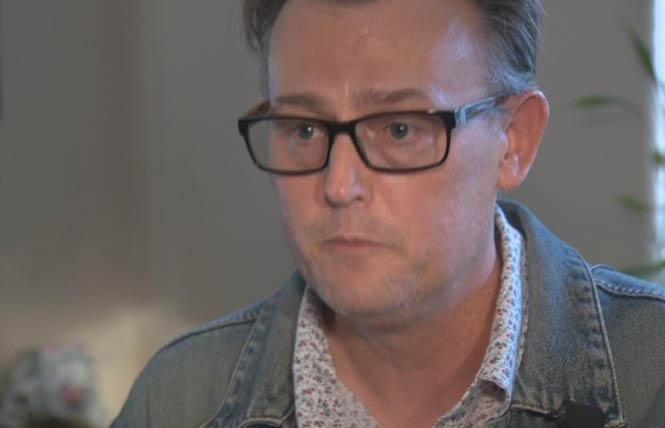 Brian Condrey, a professor at Yuba College, fought his insurance company because it would cover most services for his trans daughter. Photo: Courtesy KCRA-TV

The Tri-County Schools Insurance Group in Yuba City decided Friday, October 25, that it would change a policy that anything relating to gender dysphoria or "transexualism" would not be covered, in response to a letter from the American Civil Liberties Union of Northern California.

According to the ACLU, the insurance group will cover trans-related services effective November 1.

ACLU lawyers are representing Brian Condrey, a professor at Yuba College, who receives his health coverage from the group. His daughter, Stella, is trans and Condrey said that he and his wife have had to pay thousands of dollars in out-of-pocket expenses for almost all of his daughter's medical needs.

"With anything to do with our daughter we are stuck with out-of-pocket costs," Condrey said, who added that the total since his daughter came out in 2017 is $7,066 and counting.

Because trans identity touches on so many aspects of a person's life, the Condreys have had to pay out-of-pocket for even routine medical interventions.

"If gender dysphoria is even mentioned — like in the records — they can deny it," Condrey said. "In over 10 years there have been no denied claims for any other family members."

ACLU lawyers sent a letter Tuesday, October 22, to the insurance group and the Yuba Community College District, saying that the policy was a prima facie violation of California law, which prohibits discrimination on the basis of gender identity.

"(Tri-County Schools Insurance Group) is not a private actor," she said. "This is the state of California. It says in its joint powers authority agreement that the entity is bound by the rules of a public entity."

Gill claims that the insurance group is also in violation of Title VII of the federal Civil Rights Act, which some federal courts have found protects against discrimination based on transgender status. That issue on a national level is currently being adjudicated by the U.S. Supreme Court.

Condrey and Gill said they don't know what to do following the insurance group's October 25 decision — the family still has unpaid medical bills and he feels it is owed what it has already spent. Condrey said that the policy change will not be retroactive.

"They refused to acknowledge in any way that they were in violation of the law," Condrey said.

Condrey said that the decision to change the policy comes after years of being largely ignored by Tri-County Schools Insurance Group officials, who avoided phone calls.

"We spent the better part of 2018 making complaints," Condrey said.

Then Condrey started going to meetings of the insurance group, which didn't discuss the matter on dates when it was agreed the issue would be addressed.

"It's definitely motivated by bigotry," Condrey said, adding that insurance group director, Matthew Evans, was particularly devoted to the defense of the policy.

Gill said similar policies have started to change nationwide and that it's disappointing to find one in a progressive state like California.

"California is a leader in seeing who transgender people are," she said. "This is purely discriminatory. It's like saying 'If you're Christian, you can't have health care.'"

Condrey said that it is particularly important that these stories of discrimination in less populated parts of the state get the attention that they need. It was only after his daughter left for a larger town that the family felt comfortable going public — and he said he knows of other people who are afraid to come out due to this policy.

"In more rural areas like ours, policies like this are more likely to stand unchallenged, where the cost of coming out is much greater" Condrey said. "We're in a privileged position and we're not the only ones affected by this."

Tri-County Schools Insurance Group and Evans did not respond to multiple requests for comment as of press time.