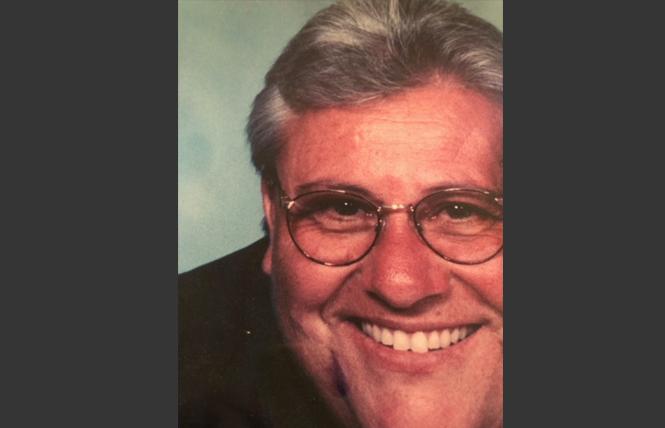 Time was, Eureka Valley Recreation Center was at the heart of LGBT sports in San Francisco. And the person most responsible for making that happen was former director of the center, Nancy Dito, a former high school four-sport star who now competes in bocce ball in Sonoma County.

I first started passing by EVRC, a block off Castro Street at 18th and Collingwood streets, back in the 1970s. I would see lost souls huddled in the shrubbery outside, and the grounds would often be littered with bottles and needles. It was not a place that inspired engagement.

And then Dito came on board in the 1980s and things started coming to life. The center became vibrant with one recreational sports program after another, and Dito helped overcome a cultural divide between the longtime blue collar residents of Eureka Valley and the incoming crowds of new residents from the LGBT community who rebranded the area as the Castro.

"I wanted them to get along, not just put up with each other," Dito, 71, said. "I remember having a meeting and I felt the pull from both sides. Some had grown up in the neighborhood and then the gay community came in. I wanted them both to have a place to congregate, to meet, to play. Seniors and kids — we needed them to all be there. I said, 'Everybody's going to get a piece of this. You're not going to get more because you were born here and you're not going more because you're coming in.'"

"Susan Kennedy and Gary Frances would go to those meetings," Gene Dermody, president of the Golden Gate Wrestling Club, said, referring to the former leader of Team SF and wrestler for Golden Gate Wrestling, respectively. "They fought to get sports programs in there. Nancy was tough and she pulled it together."

Basketball. Volleyball. Soccer. Tennis and badminton. Wrestling and folk dancing. A women's night. Sports flourished in the center, and Dito, an athlete down to the core of her soul, was at the heart of it.

As she was building the programs and changing the culture, she was a target for aggrieved bigots.

"They would call me names as I walked to my car," Dito said. "They'd yell, 'You dyke!' — that kind of stuff. Was I afraid? Probably a little bit. And they were pretty open about it. It's not like they were doing it where I couldn't see them. Now if I meet them, they're very pleasant."

Dito said she started playing sports at the age of 3, encouraged by a father who was an athlete and a mother who was very active. Starting at Mercy High School, which inducted her into its athletics Hall of Fame in 2015, and continuing through City College of San Francisco and then San Francisco State University, she excelled at whatever sport she tried, from basketball and volleyball to tennis and pingpong.

How good a basketball player was she? Well, for a couple of years the Golden State Warriors sponsored a four-team women's league to play at their games and she was a scoring star. She was selected for national team tryouts when it seemed like the Olympics were going to add women's basketball for 1972. So, yeah — damn good.

After college, she taught physical education before going to work in the city's recreation and parks department. She worked in the department for 27 years, 22 of them at EVRC.

"I loved being with people," she said. "I loved teaching and helping people. It was a good fit for me."

I asked Dito what her coming out process was like.

"I didn't really know that I was a lesbian until my early 20s," she said. "In those days bars were places to meet. I'm really honest. For me it was just being obviously out, not announcing it. I told my mother and my father and I did not get a good reception. They ostracized me from the family for many, many years. It's not really for me to judge. Eventually they both in their own ways apologized and tried to accept. But they were the product of their particular lives."

In 2003 all programs were moved out of the recreation center as it underwent renovations for a couple of years. Dito decided to stay on through that process before retiring.

"She put me and Tony Jasinski on the renovation committee," Dermody said. "She gave us a voice."

Jasinski said he interacted with Dito for about 15 years.

One source of contention during the renovation discussions was what to do about the showers that used to be in the center next to the restrooms; they're gone now. Before coming to the rec center, Jasinski said, gay basketball had been housed in a church in the Haight-Ashbury district, but lost the gym when it was converted into a homeless shelter. Sports activists worried that the city might be tempted to do the same with the EVRC gym if the showers remained.

An ugly metal gate barring the stairs to the multipurpose room was removed. The gymnasium got a major facelift. A separated space for youth community programs was created and a playground sparkled in front of the main building. The outdoor field was named in honor of Rikki Streicher, an early LGBT rights pioneer and leader in the formation of the Gay Games. The gymnasium was named in honor of Mark Bingham, the gay rugby player who lost his life fighting the hijackers on Flight 93 during 9/11.

Jasinski said the accomplishment of Dito's he most admired was getting a dog park installed.

"The neighborhood demographics had changed," Jasinski said. "There was a kids baseball field there that wasn't getting used as much and people were walking their dogs there and making it unusable for baseball. We designed the dog park, which is working really well and there is still a ball field."

Sadly, after Dito's retirement, the city's approach to its parks and recreation centers began to change. Some politicians started advocating for privatization of recreational spaces. A push began to look at recreation centers not so much as community resources but as rental cash cows waiting to be milked. Gradually centers started charging rents rather than encouraging growth of community-building recreation programs. One by one LGBT sports groups started leaving recreation centers. These days at EVRC the LGBT sports presence is pretty much down to basketball, wrestling, and an occasional dodgeball game.

And Dito? She's been with her partner, Jan Farrell, for 41 years. They take Olivia cruises. She's rekindled her competitive spirit as a bocce ball organizer and competitor with fellow LGBT seniors in Sonoma County. She holds holiday socials to bring people together.

"I'm still playing bocce ball and teaching clinics in Sonoma," Dito said. "There are people who play or write or are musicians or whatever and they can do those things until the day they die. I'm an athlete, but I can't show you my athleticism any more today. If anyone sees me kind of move occasionally, they know. Physical therapists who work on me say, 'You were once an athlete. We can feel it underneath, your muscle structure — we know.'"

And she rejoices in the growth of women's sports.

"I am so glad that women nowadays have so much more opportunity to play, that mothers and fathers encourage their girls as well as their boys to play," she said. "There's so much we have to learn in sports."

And nobody better to teach them.