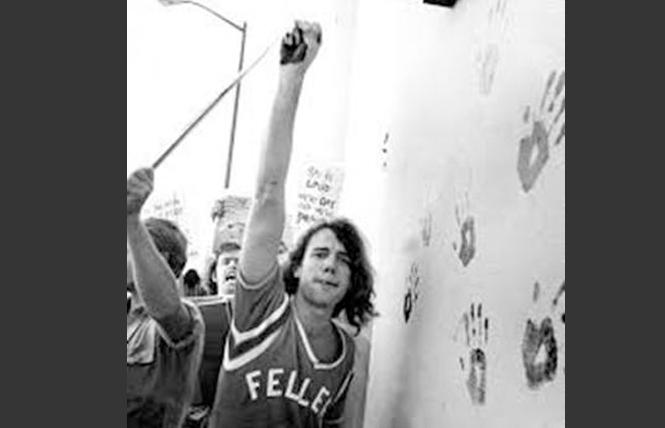 Halloween has long been one of the queerest of holidays, but on October 31, 1969, San Francisco LGBT activists found new ways to confront their terrifying fears of media misrepresentations and police violence. In their wake, they left behind ghostly new symbols of gay liberation, purple hands, which continue to make apparitional appearances in the work of those who practice the dark arts of queer history.

The horrifying tale began on Saturday, October 25, 1969, when the San Francisco Examiner published journalist Robert Patterson's slashing expose on Folsom Street gay bars, clubs, and restaurants. For Patterson, these "deviate establishments" were "sad" and "dreary" sites for the "sick" ceremonies of "homosexuals," "transvestites," "drag queens," and "male prostitutes." The frightening feature was particularly hostile to those Patterson described as "semi-males," "members of the pseudo-fair sex," "women who aren't exactly women," and "hybrid blossoms."

Over the next two days, LGBT critics of Patterson and the Examiner attempted to speak with the beastly journalist and his monstrous editors, who refused to meet with them. On Monday, October 27, two members of the Committee for Homosexual Freedom, a radical gay liberation group that had been staging demonstrations since April, disguised themselves as human beings and entered the Examiner building at 110 Fifth Street, where they reportedly were verbally and physically attacked by Patterson.

On Wednesday, October 29, CHF activists were joined by members of two new Bay Area groups, Gay Guerilla Theatre and Gay Liberation Front, for an invasion of the Examiner. Carrying signs and leaflets, they criticized the newspaper for its "malicious, erroneous, and irresponsible" story and called on the Examiner to fire the ghastly Patterson. According to one media source, newspaper workers responded by throwing activist Darwin Dias down a staircase.

At this point, CHF and GLF decided to organize a major demonstration at the Examiner at noon on Friday, October 31. Hoping to exorcise the building's demons, 50-100 protesters peacefully picketed outside the newspaper's building until they were viciously attacked from above. According to a CHF spokesperson, "Suddenly a plastic bag full of printers' ink was thrown from a second-floor Examiner office, soaking the pickets and splattering the walls of the building. Someone wiped his hands on the wall. In a few seconds, inked handprints covered the wall and windows. 'Fuck the Examiner,' was written by a finger dripping with ink. 'Gay is,' wrote a handsome young man just before he was dragged by the hair into the waiting police van."

Multiple first-person accounts indicate that after the activists began leaving purple imprints of their hands on the Examiner building (with some reports indicating that Stevens McClave was the first to do so), the possessed police responded by aggressively attacking the protesters. One demonstrator, Michael Carbone, suffered two broken ribs and a torn ear; Dias lost his front teeth. The police also targeted two journalists, Marcus Overseth of the San Francisco Free Press and Leo Laurence of the Berkeley Tribe. Laurence managed to toss his camera film to Larry Littlejohn, president of the Society for Individual Rights, before he was taken into custody. In all, the police arrested 12 or 13 protesters, ranging in age from 19 to 36. All were charged with misdemeanors, including disturbing the peace, malicious mischief, blocking a sidewalk, resisting arrest, using obscene language, and refusing to follow police orders. Five or six were additionally charged with battery on an officer, which was a felony.

After the police broke up the demonstration at the Examiner, LGBT activists regrouped at the nearby Glide Methodist Church, where they decided to march on City Hall to protest police brutality. There, at approximately 2 p.m., 15-25 activists formed a picket line outside the building; they later conducted a sit-in in the offices of Mayor Joseph Alioto. Most of the protesters agreed to leave when the mayor's office closed for the day at 5 p.m.; the three who refused to do so (James Connolly, Larry Clarkson, and Stephen Matthews, ages 19-29) were taken into custody on charges of trespassing, unlawful assembly, and remaining at the site of a riot.

Two weeks later, eight of the activists who had been arrested at the Examiner pleaded no contest to the charge of refusing to obey police orders (the other charges were dropped); they were given five-day suspended sentences and six months' probation. Al Alvarez, a member of the Society for Individual Rights, refused to accept a similar deal and was acquitted after a jury trial. Media sources do not reveal what happened to the rest, though several indicate that felony charges were dropped against all but one of the activists; the exception was accused of biting the hand of Sergeant Sol Weiner during the Examiner demonstration.

In the aftermath of the Purple Hands protest, there was praise for the spirit of queer unity that seemed to prevail during and after Halloween. Of the 12 or 13 activists arrested at the Examiner, media reports identified one as a woman (Karen Harrick/Herrick/Hurrick); one or two used gender-ambiguous names; two had names suggesting they were Latino. The late lesbian leader Del Martin later wrote that another woman was taken into custody but not booked. According to one report about the demonstration at the Examiner, "A transvestite clunked a pig over the head with the picket sign he was carrying. The pole broke and the dazed officer looked shocked as he watched him escape running as fast as he could in his tight skirt, his high heeled shoes clicking like a typewriter as he ran down the sidewalk." With respect to the demonstration's racial politics, some may have objected to leaflet language that used the N-word to condemn society's treatment of the gay community, but the text also called on the community to "oppose the exploitation of all oppressed minorities" and "fight discrimination and racism."

Other signs of LGBT diversity and queer unity emerged after the protest at the Examiner. At the City Hall demonstration, a "black gay" protester "scolded" the police for nearly knocking him down as he tried to enter the building: "City Hall is a public building open to everyone." In a first-person account of his time in jail, Overseth mentioned conversations with fellow prisoners who were "united in oppression;" they included "elderly alcoholics from the Tenderloin, Blacks, Chicanos, American Indians, Heads and Gays." Multiple left and queer groups provided financial, legal, and political assistance for those who were attacked, arrested, and jailed on Halloween. A few months later, Martin provided further support for coalitional politics when she reported in a gay publication that Patterson, the offending Examiner journalist, had been criticized by African American activists for racist reporting in 1968 and 1969.

Subsequent developments suggest that Patterson may have been haunted by the ghosts of purple hands. In 1972, rival reporters spilled ink and spilled the beans about a recent series of Examiner stories by Patterson. The stories purportedly were based on a visit that Patterson had made to mainland China, except there was no evidence that he had gotten further than Hong Kong. After Patterson failed to provide any proof that he had visited the mainland, the Examiner fired him.

In the meantime, other U.S. newspapers and magazines may have wondered whether they might be the next victims of purple protesters. On September 12, the Gay Liberation Front in New York had staged a major demonstration at the Village Voice to protest the newspaper's coverage of gay issues and its refusal to accept classified advertisements with the word "gay." On November 5, just a few days after the Purple Hands protest, the Homosexual Information Center sponsored a demonstration at the Los Angeles Times when that newspaper refused to accept advertisements with the word "homosexual." Then on October 27, 1970, the anniversary of the first gay confrontation at the Examiner, New York's Gay Activists Alliance staged an all-day sit-in at Harper's to protest the magazine's publication of a genocidal article about homosexuality by journalist Joseph Epstein and its refusal to provide equal space for a response.

In reporting on the 1969 Purple Hands protest in the San Francisco Free Press, Overseth wrote that "for many of us it all changed on Halloween." Fifty years later, much has changed but some has not in the treatment of LGBT people by the press and the police. To address the ongoing demonization of queer "others" by those who exercise power in our society, it might be time to summon the ghosts of Purple Hands to spook the political reactionaries who continue to terrify and terrorize the most vulnerable among us.

Marc Stein, a gay man, is a professor of history at San Francisco State University and the author of "The Stonewall Riots: A Documentary History" (New York University Press, 2019).