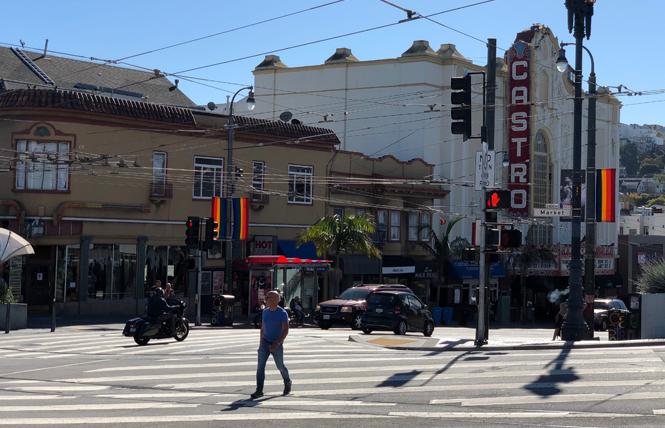 The intersection of Market and Castro streets has seen three vehicle collisions with pedestrians since June. Photo: John Ferrannini

Gay District 8 Supervisor Rafael Mandelman will seek improvements to the intersection of Market and Castro streets to improve pedestrian safety after at least four people were hit by oncoming traffic in the past several months, according to a spokesman.

"Ensuring the safety of pedestrians and cyclists is a top priority for the city and for my office. I've asked the SFMTA to assess the intersection of Castro and Market to see what additional safety measures can be taken to protect pedestrians." Mandelman wrote in an emailed statement to the Bay Area Reporter October 17, referring to the San Francisco Municipal Transportation Agency.

Mandelman's statement came about after Mitch Enfinger, a gay man who lives near the intersection, contacted the B.A.R. with three videos of pedestrians being struck by vehicles in the part of the intersection where Market Street crosses Castro Street.

The video of the first collision, from June 23, shows two men struck by the car and thrown into the air and onto the street.

The second collision was on September 22. After the victim was struck, a bystander helped them get up and to safety.

The third collision, on October 13 at approximately 8:30 p.m., was an apparent hit-and-run.
"I'm honestly concerned nothing is going to happen until someone is killed at the intersection of Castro and Market," Enfinger said October 15. He added that he reached out to people who work for the supervisor to little avail.

Enfinger said that a major issue is the fact that the light is green for cars turning from Market Street onto Castro Street at the same time as pedestrians can use the crosswalk.

"It's also really bad in the other crosswalk where there's not a camera," Enfinger said, referring to the stretch of Castro Street that crosses Market. "You're not supposed to make a left on Market but a lot of people do every single day."

Tom Temprano, a gay man who is an aide for Mandelman, said in a phone interview with the B.A.R. that the supervisor has been coordinating with SFMTA on the Upper Market Safety Project, which SFMTA notes is "a substantial, multi-phased effort to improve the safety and comfort of Market Street between Octavia Boulevard and Castro Street for all roadway users."

"It's moving pretty quickly," Temprano said. "But any (SF)MTA fix is a long fix."

Temprano said that most of the work heretofore discussed for the intersection had been on the northwest corner.

Ben Barnett, a spokesman for SFMTA, said, "The Upper Market Safety Project plans to create a new crosswalk and curb ramps between the intersection and Pink Triangle Park." Additionally, he wrote in an email that "a revised lane configuration will slow westbound vehicles turning off of Market onto westbound 17th Street."

While the city of San Francisco is in the midst of a 10-year plan to eliminate traffic-related fatalities, 22 people have died () on the city's streets as of August 31 — the most recent date for which data provided by the SFMTA to the B.A.R. is available (the city is not counting freeway fatalities in its official tally, though this would bump the number up to 28).

Of the 22 deaths, 15 were pedestrians, one was on a motorcycle, and six were inside motor vehicles.