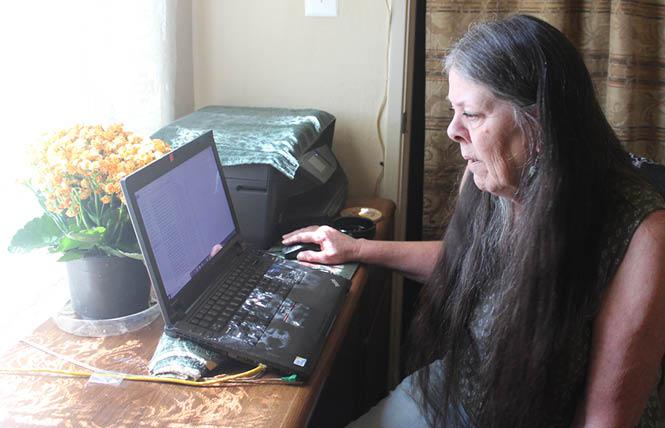 Loreen Willenberg works on her laptop in her home office. Photo: Bob Roehr

Leading HIV researchers have come to believe that at least one person has found a way to naturally rid their body of the virus.

While they believe they understand part of how that was accomplished, they may not know the entire story. And they are grappling with how to turn this information into better prevention, treatment, and a cure for HIV.

Loreen Willenberg is that unique individual. She now lives in Sacramento and was diagnosed HIV-positive in 1992 during the worst of the plague, before any effective treatments were available. While she expressed antigens to the virus, indicating that she had been exposed and her immune system had responded, early HIV viral load tests could not detect the virus, and her CD4 counts did not decline. Later, sophisticated tests could detect fragments of HIV RNA in her cells but no complete virus that could reproduce.

She started participating in research studies in 2005 — at UC Davis, UCSF, the National Institutes of Health, and the Ragon Institute in Boston, an affiliate of Harvard, MIT, and Massachusetts General Hospital — and quickly was labeled an HIV elite controller, a group that is less than half a percent of those infected who can control HIV without medication.

The first paper suggesting that she might have purged the virus was published in the journal Blood in 2012 by NIH researcher Stephen Migueles. It was a series of four case studies of elite controllers; Willenberg was the unnamed patient #4 who seemed to possess CD8 T cells that were very active and effective in killing HIV-infected cells.

Migueles only proposed that she had cleared the virus as a hypothesis to explain clinical data such as not being able to detect any replication competent virus in her blood or the reservoir of gut lymphoid tissue. He told Willenberg the only way he could prove the theory for sure is by looking for HIV in every tissue in her body, including her brain, with an autopsy.

Then this past summer, at an AIDS conference in Mexico City, Ragon researchers presented their data on a "San Francisco patient," suggesting that the person had achieved a "functional cure" without using any treatment. The data was from Willenberg.

And in retrospect, data from an HIV gut study at UC Davis in 2005 fit into a pattern consistent with her having already cleared the virus. Such a hypothesis had seemed inconceivable at the time.

Dr. Steve Deeks, a respected HIV researcher at UCSF, knows Willenberg through donations of blood, immune cells, and gut tissue she has made through the SCOPE study run by the university. He has come to believe her immune system has found a way to clear the virus. He said, "Once you meet her it's hard to forget her. She is very inspiring and very sincere, and very intelligent, and very educated, and very opinionated."

Willenberg's incredible 27-year journey from frightening diagnosis to veteran research advocate, and the first person believed to have beaten HIV, is told for the first time in www.leapsmag.com.

Willenberg will be a featured speaker at an HIV cure community forum in San Francisco in November.

California woman may be cured of HIV
Sign up!