SF homeless advocates kick off All In campaign 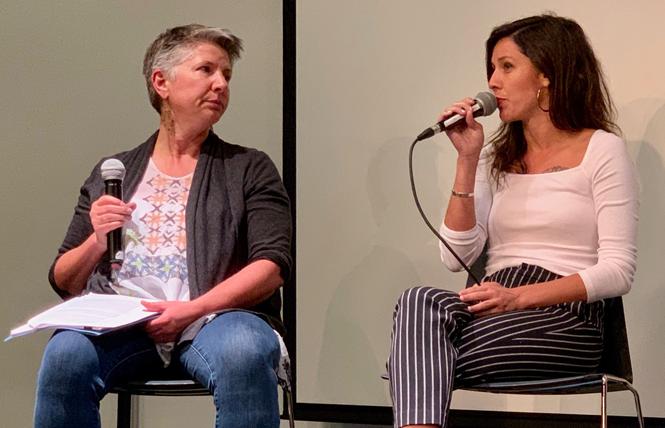 Jodi Schwartz, left, executive director of LYRIC, and Stephany Ashley of Brilliant Colors talk about the All In homeless campaign at an October 1 meeting. Photo: Sari Staver

Homeless advocates this month kicked off a citywide campaign to encourage residents to get involved in solving the epidemic of homelessness in San Francisco.

At an October 1 neighborhood meeting held at the San Francisco LGBT Community Center, members of the All In coalition told some 60 people that the group hopes to find homes for 1,100 currently homeless people within the next year.

The All In coalition is part of Tipping Point, a 15-year-old nonprofit that has raised more than $260 million to educate, employ, house, and support people in need in the Bay Area. All In launched in July at a meeting in Duboce Park where it announced "a new, first-of-its-kind coalition and campaign calling for greater urgency in solving homelessness."

District 8 includes the Castro, Noe Valley, Glen Park, and Diamond Heights. Meetings in the city's 10 other supervisorial districts will follow.

All In includes more than 90 organizations, representing people from all walks of life who support solutions to homelessness across the city.

At the meeting, Stephany Ashley, the housing services director for Brilliant Corners in Northern California, said the solution to homelessness "is not easy, but is quite simple."

"People need housing with services," she said. "The longer I work (in this field) the simpler I believe the solution is. At the point someone has a stable place to stay, their entire life" can begin to change.

Ashley said that according to the 2019 Point-In-Time Count there are some 370 homeless people in District 8.

"In a city as progressive and wealthy as San Francisco," it should be possible to solve homelessness, she said.

There are misconceptions about the demographics of San Francisco's LGBT community, said Rebecca Rolfe, executive director of the LGBT center. Many people seem to have the false notion that the gay community is populated by "gay white men with a lot of income who take fabulous vacations," she said.

The center offers a number of programs for homeless youth, she said, including an economic development program, education on financial literacy, and a small housing program.

"The building welcomes the community," she said, and people have free use of computers, bathrooms, and access to information on other local resources.

Rolfe said there is not a lot of data on homelessness in the LGBT community. The city's most recent Point-In-Time Count found that 27% of homeless people identify as LGBT, double the representation of LGBT people in San Francisco. Among young people, the differences are "more striking," she said, with close to 50% of homeless youth identifying as LGBT.

Conversations with homeless youth indicate that they believe one of the primary reasons they became homeless was homophobia and transphobia, Rolfe added. Further study is needed to understand the disparity, she said.

Jodi Schwartz, the executive director of LYRIC, had an optimistic point of view.

"Youth homelessness is a solvable issue," said Schwartz, a lesbian. "We have an amazing, well-coordinated, and sophisticated network of providers who understand that the barrier to solving homelessness is housing. It's that simple."

The conversation "must switch" too focusing on how each supervisorial district can create new permanent housing, she said.

Currently, the city spends a lot of money housing youth in expensive settings, such as jail or juvenile hall.

"This is not what people need," Schwartz said.

Speaking from his personal experience being homeless for 10 years, beginning at age 21, Gary McCoy, 41, a congressional aide in the local office of House Speaker Nancy Pelosi (D-San Francisco), said the years living on the street "were the most challenging" time of his life.

McCoy, a gay man and housing activist, said he became HIV-positive within six months of living on the street. But, McCoy said, he didn't keep doctor appointments, worsening his medical problems. Sleeping under bushes or overhangs, McCoy said he got up "before sunrise" because he was "so embarrassed about the way I was living." Substance abuse with methamphetamines "numbed the pain but didn't help my mental health," he said.

"If it wasn't for the services available in the city, I wouldn't be alive today," McCoy said.

His first step was getting sober, which led him to "figure out who I was and where I fit in in the city." Conceding that he was "fortunate" to find subsidized housing, the shortage of such opportunities is now at "crisis" levels.

"It's important to me to try to find housing for people living on the street," said McCoy.

The rapid growth of the city's tech industry has contributed to housing problems, Mandelman noted. In the past 10 years, some 150,000 new jobs have been created, while only 16,000 housing units have been added, he said. More money is needed for affordable housing, he said, noting that Proposition A, a $600 million housing bond, is slated for the November 5 ballot.

In addition to building new units, programs must also focus on using existing stock, he said.

Schwartz urged attendees to "get involved" with the city's budget process and hold elected officials accountable to their priorities. She suggested "standing up" to the city's public safety budgets, and urge politicians to direct more funds into affordable housing.

In an email, Shaun Haines, a gay black man who attended the meeting, wrote that he thinks it's vital that the queer community also engage in programming and education regarding anti-blackness.

"Our mainstream LGBTQ+ community has its issues with race and often gives itself a passing grade because of the similarities of how we are oppressed," Haines wrote. "However, anti-blackness and racism within the LGBTQ+ community exists and permeates all areas of leadership and activism.

"It is big issue for all of us that keeps us from experiencing true unity within our larger movement for social justice," he added. "We still receive reports to this day about how black people are treated differently in our bars, in our board rooms, and as we organize to protest our bigger societal issues. Programs like this help us continue to shed a light on this problem, they help us change that trend and narrative."

From the audience, Billy Lemon, a gay man who's executive director of the Castro Country Club, said that if people were looking for a "tangible thing to do," he suggested "being nice to the homeless in any way possible."

For example, he said, if you're buying something at a cafe, you could buy something extra to give to someone who is living on the street.

If you see someone on the street in crisis, try to understand they are experiencing a trauma. By "leading with kindness, your example may inspire others to do the same," he said.

At the October 8 Board of Supervisors meeting, Mandelman introduced a resolution in support of Tipping Point's All In campaign. In a written statement, Mandelman noted that Tipping Point "has been a strong partner in the city's efforts to address homelessness, funding the implementation of a new behavioral health bed-tracking tool and committing $3 million to create a new 15-bed behavioral health respite center. The resolution was co-sponsored by Supervisors Vallie Brown, Catherine Stefani, Sandra Lee Fewer, Gordon Mar, and board President Norman Yee.