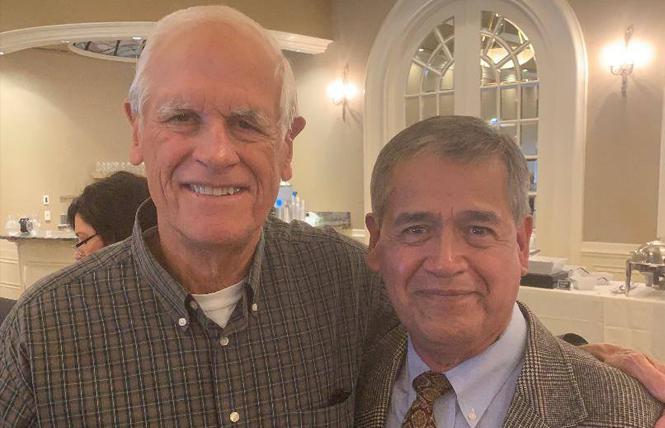 Having heard oral arguments last week in three federal cases seeking workplace protections based on sexual orientation and transgender status, the U.S. Supreme Court has the LGBT community on tenterhooks awaiting its decision. It could either set precedent by adopting new rights for LGBT employees or deal a significant blow to the fight for equality.

A decision may not come until next June. Forty-four years ago LGBT advocates in California found themselves in a similar state of suspense as Golden State lawmakers debated whether to protect gay employees.

In an unexpected move then-Assemblyman John Foran, a Democrat from San Francisco who died in 2014, had introduced Assembly Bill 633 that called for the state's Fair Employment Practices Commission to add sexual orientation to its purview. Foran's aim was to make it illegal for an employer to fire someone because they were gay or lesbian.

Marking one of the first times a state legislative committee voted for an LGBT rights bill, the Assembly's Labor Committee passed Foran's bill by a 6-2 vote on April 7, 1975 along party lines, with Democrats all voting for it. As the Advocate would report a month later, the bill only survived due to then-Assembly Speaker Leo McCarthy "dramatically" rushing committee member Louis Papan (D-Daly City) "to the hearing from another meeting for his affirmative vote." (McCarthy and Papan both died in 2007.)

Foran had introduced the bill January 30 to the consternation of George Raya, who in 1974 had become the Golden State's first full-time openly gay legislative advocate. He had moved back to his hometown from San Francisco in order to work pro bono as a lobbyist for the Society for Individual Rights, a San Francisco-based gay rights group.

"Our strategy was not to have a San Francisco person introduce the bill," recalled Raya, 70, in a recent phone interview with the Bay Area Reporter from his home in the state capital. "It was why we went to Larry Kapiloff of San Diego. He was willing to carry the bill because he was in a safe Democratic district. So when Foran introduced the bill, it came as a surprise."

Nonetheless, Raya worked with Foran to drum up support for the bill within the LGBT community across the state. Their strategy was to counter arguments that liberal San Francisco leaders were attempting to "push their morality on the whole state," recalled Raya.

The bill survived a number of committee votes before heading to the full floor of the Assembly for a final vote that summer. If passed, it would be sent to the state Senate and taken up in 1976 during the second year of the legislative session.

In his August 21, 1975 "Milk Forum" column in the B.A.R., gay leader Harvey Milk asked readers to jam Assembly members' phone lines and demand they support the bill or face the LGBT community's wrath when they sought re-election.

"At this time there is some doubt whether there are enough votes to get the bill passed. If it does not get through it may be two years before the next try," warned Milk, two years before he would make history by becoming the first out person to win elective office in the state.

"The ramifications that would come out of its passage spread into every avenue of gay freedom — from allowing more gays to step out of their closets to the hiring of gays as teachers and police. The list is endless," added Milk, who was assassinated in 1978 — 11 months into his first term as a San Francisco supervisor.

Despite the efforts by LGBT advocates and their legislative allies, Foran was unable to secure passage of AB 633 by the full Assembly. The bill was voted down 22-48 the last day lawmakers had to vote on legislation. Writing for the Advocate, reporter George Mendenhall wrote, "the vote was taken in the final two hours of the 1975 legislative session by an exhausted body that appeared to rebel against the controversial measure."

The outcome was "disappointing of course," said Raya, but hardly a shock as anti-gay religious groups had swung into action to defeat the bill and lawmakers had begun to fret about their ability to get re-elected if they supported it.

The bill's demise was offset by the passage that year of then-Assemblyman Willie Brown's AB 489, which ended the state's sodomy laws and legalized sex between consenting adults of the same sex. For six years Brown, a powerhouse politician from San Francisco, had tried to pass it.

The legislative fight over the sodomy bill had also inflamed the religious right and likely helped sink Foran's bill. As Mendenhall noted, lawmakers "who had supported the Brown measure welcomed the Foran bill as an opportunity to now vote 'no' on a gay issue — to ease the pressure" they were facing from anti-gay groups.

In 1976 Raya left the Statehouse to return to San Francisco for a job with the county welfare department. State lawmakers would again try to pass workplace protections for gay people in 1979, while that April then-Governor Jerry Brown (D) issued an executive order banning state agencies from discriminating against employees based on sexual orientation.

AB 1, by then-Assemblyman Art Agnos (D-San Francisco), would be introduced during multiple legislative sessions throughout the 1980s. It passed out of the Legislature in 1984 only to be vetoed by then-Governor George Deukmejian (R).

In an oral history he did for the California State Archives, Agnos explained why he used his privilege to introduce the first bill of the session, which was due to lawmakers being called alphabetically, to use the number 1 for the gay rights bill.

"I wanted people to know that this was a significant issue to me, and it ought to be a significant issue to the people of our state because gay people are part of us, and therefore deserve the same rights as all of us," said Agnos. "By having it as the first bill in the Legislature, it made a symbolic statement that this was an important issue, and it always got publicity because it was the first bill."

Agnos left the Legislature in 1987 when he was elected mayor of San Francisco. Other lawmakers then took up the gay employment rights bill, leading to then-Governor Pete Wilson (R) vetoing the legislation in 1991.

The following year Wilson reversed course and signed into law a similar bill, sponsored by then-Assemblyman Terry B. Friedman (D-Los Angeles), making California the seventh state to bar job discrimination based on sexual orientation. Wilson, however, did veto a second bill that would have provided stronger protections from discrimination for gay employees.

In 1999 then-Assembly Speaker Antonio Villaraigosa (D-Los Angeles) was able to pass his AB 1001, which put the gay employee protections under the auspices of the Fair Employment and Housing Act, thus codifying existing case law that prohibited housing discrimination based on sexual orientation. And in subsequent years California lawmakers added gender identity protections for transgender employees.

At a recent luncheon Raya ran into former Assemblyman Gary Hart (D-Santa Barbara), who would go on to be the state superintendent of education, and they reminisced about their time in the Capitol building. Raya said that Hart told him his "proudest vote ever in the Legislature" was the one he cast for AB 633.