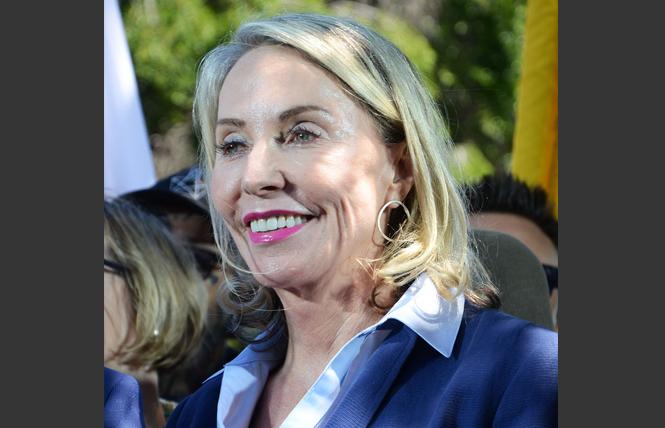 District 5 Supervisor Vallie Brown deserves election to complete the term of former supervisor London Breed, who appointed her to the seat when she became mayor last summer. We've observed her performance on the Board of Supervisors and had been impressed since meeting with her in January and more recently for an editorial board meeting. She was confident and eager to work on the many challenges the district and city face.

Brown has worked in City Hall before, of course, as an aide in the same office of both Breed and former supervisor Ross Mirkarimi, and she's lived in the district for more than 20 years. That long and direct connection to her district provided a foundation for Brown to prove that she is up to the task of supervisor since her appointment.

One of the major issues in District 5, which includes the Haight-Ashbury, Lower Haight, Hayes Valley, Western Addition, Fillmore, Japantown, Cole Valley, and surrounding neighborhoods, is affordable housing. She created a neighborhood preference policy to give existing local residents priority for new affordable housing. And she expanded the city's program to buy at-risk rent-controlled buildings by $40 million to protect tenants from eviction by preventing Ellis Act evictions and permanently preserving affordable, rent-controlled housing. According to her website, she is actively working to bring a Navigation Center for transitional age youth to the district. She passed legislation to create a Vehicular Navigation Center for people whose last option is living in their vehicles or on the street.

The site of the now-closed McDonald's at the corner of Haight and Stanyan streets has long been a problem for the neighborhood, but could be a prime location to build more affordable housing. The city sought requests for proposals to activate the space while the development project seeks approvals but ultimately rejected the two it had received. Brown told us she supported the city's decision due to concerns it could delay critically needed housing, particularly if Proposition A, the affordable housing bond, passes next month, as the goal for the site is 100% affordable housing. "So I just thought I'd rather wait a couple months, see what happens with the housing bond, and then we can refocus. If the housing bond doesn't pass, then the activation with the five years can go through," she said. "But I just felt it was so important for housing. And I've seen, you know, I've just seen that with the Hayes Valley parcels and how long it took them to get housing and the ones that have just been sitting there, especially that transitional age youth housing. I just thought, I can't do anything to slow up housing. Right? One hundred percent affordable housing in the city. How can we slow that up?"

Muni and the San Francisco Transportation Agency that oversees it are constantly criticized for lousy on-time performance and other issues. Brown told us goals should be a sustainable system and improving transit reliability. She differs from her opponent on making Muni free for everybody, telling us that MUNI would "fold on itself" without fare revenue to help with the costs. "I just don't see how it's going to be free and be reliable," she said. "I think the first thing we should do, like I said, get it reliable and people will take it. And then let's look, OK, how much money is this really cost to have Muni reliable? I don't want to, like, have free Muni and then have it go down and then it's not reliable because, guess what, people won't take it even if it's free."

On the city's mental health crisis, Brown has worked with gay District 8 Supervisor Rafael Mandelman to authorize the creation of a San Francisco conservatorship program to expand drug and mental health treatment. And, while Mandelman endorsed her opponent, he did tell us that he has worked well with her on the board.

Brown has been a solid ally to the LGBTQ community. Her roots with the community go back to the early days of the AIDS epidemic, when she married gay male friends on two separate occasions so that they could obtain health coverage. The first later went to Paris, where treatment at the time was better, and she divorced her second husband. We met with her shortly after Breed and health officials announced that the city, for the first time, had fewer than 200 HIV infections in 2018. "I'm happy about it," she said. "But I think we still need to stay vigilant." We agree.

Brown has been a productive supervisor who knows her district well. Voters in District 5 should elect her.