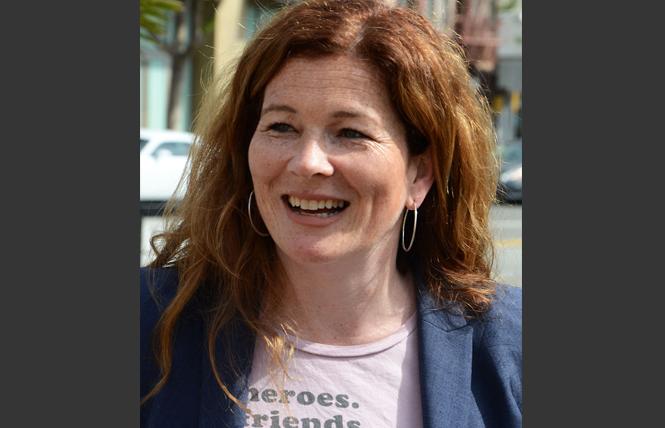 In the first open race for San Francisco district attorney in more than 100 years, Suzy Loftus is the candidate who best exemplifies San Francisco values and whose professional record has prepared her to lead the department. She is committed to criminal justice reforms and focusing on quality of life crimes that San Franciscans desperately want addressed. She is a straight ally who has worked with LGBT community leaders for years, and has a keen sense of the necessary changes that are needed for an office that has long been neglected.

The DA's office has suffered under George Gascón, who abruptly announced his resignation last week so that he can move to Los Angeles County to establish residency in a bid to run for Los Angeles District Attorney next year. He gave Mayor London Breed the opportunity to appoint an interim DA to fill out the remainder of his term; last Friday she named Loftus, who will start when Gascón formally leaves on October 18. The other candidates and their supporters charge that this gives Loftus an unfair advantage in next month's election. The City Charter allows the mayor to make an interim appointment, and Breed decided that there is minimal risk of a backlash by voters to punish Loftus.

Loftus has a long and varied record in San Francisco politics and its law enforcement community. As a former president of the Police Commission, Loftus made a priority of improving the San Francisco Police Department's response to violence against women and children, expanding the use of technology to solve crime, and making our streets safer for pedestrians, bicyclists, and motorists. Under her leadership, the Police Commission reformed the city's use-of-force policy, and instituted body-worn cameras to increase transparency and improve police-community relations. She was a prosecutor in the DA's office under Kamala Harris. During an editorial board meeting, she told us that she is aware of the problematic attrition rate in the DA's office — 40 attorneys have left this year — and the basic need to hire and retain qualified lawyers, investigators, and support staff in order to rebuild the department. Currently, Loftus serves as legal counsel for Sheriff Vicki Hennessy.

We asked Loftus about her relationship with SFPD, because police play a critical role in determining whether criminal charges are filed and her success will depend on it. To say that the current relationship between the police department and Gascón is strained is an understatement. Gascón, who used to be the city's police chief before he was tapped to be DA by outgoing mayor Gavin Newsom, has never enjoyed a good working relationship with the officers he once oversaw and almost anyone seeking justice suffered for it.

The powerful San Francisco Police Officers Association has not endorsed any candidate for DA. Regarding improving relations with SFPD, Loftus said that holding the DA's office to a higher standard will help. "I think that what we have to do is get back to having a DA who's committed to running a world-class law office that is supporting our lawyers, that when police officers do a good investigation, we pursue the case and we are respectful and professional, I will definitely prioritize holding my office to a high standard," she said. We believe that this should be a top priority, as investigators from both departments must work together, and use modern tools, in order to successfully prosecute criminal cases. That has been lacking in San Francisco, so Loftus will have a lot of work to do.

Public safety is another crucial issue that Loftus is prepared to address. Loftus told us that she's a "straight-shooter" and while she has "deep respect" for police officers, she will hold them accountable, including charging them if necessary in an officer-involved shooting if that determination is warranted: "And I think that in these cases, my commitment is to hold people accountable when they break the law. And if that person is a police officer, I will do that. If the person is someone who, you know, is committing a crime on our streets, it's not going to be about their status. It's going to be about the fair administration of the law. And I think that's what people are looking for." To ensure confidence in the process, she would call for an independent investigation by the state attorney general's office, which would provide a more transparent procedure for the victims' families and the public.

"You know, my time on the Police Commission, I sat in community rooms and dealt with grieving families and communities," she said. "And I recognize that the tremendous damage that's done when there's an officer-involved shooting. It damages the relationship of trust, and uniformly across the board, what I found from communities is what they want is fairness, they want a fair investigation." She thinks such investigations should be completed in six months, not the years that it took for Gascón's office: "The officer is left with a cloud and the community is left with questions."

Loftus wants to expand neighborhood prosecutors who will report to her in order to end the epidemic of car break-ins and other quality of life crimes. We asked if video evidence will be necessary for her office to prosecute a crime and were told it will not. She also wants to establish a civil rights unit — a first for the office — to address racial disparities and other issues. "I want prosecutors to say 'It's my job to do something,'" she told us. She plans to take on wage theft cases and housing and homeless evictions.
Loftus supports conservatorship for those who may be a danger to themselves or others. On San Francisco's juvenile hall, she supported the Board of Supervisors' decision in June to close the facility by 2021, but believes a smaller — 10 to 20 bed — secure facility will still be needed. "I was the first candidate to put out a plan to what I think we need to call ending the incarceration of children as we know it," she said. "And so I think everyone is clear, including the Board of Supervisors, and all of the various advocates, San Francisco will continue to need a secure facility to detain kids who are a danger to themselves or others."

Loftus has a solid understanding of improvements needed in the DA's office — just about everything — and has plans to rebuild it. She was the first to declare her candidacy for DA — before Gascón announced he would not seek re-election, which encouraged other candidates to jump in. She had the confidence to challenge a sitting DA based on her personal dedication and commitment. "You know, I believe that San Francisco wanted a different approach," she said. "And my background as a prosecutor, and as someone who's a reformer, I think I just couldn't sit by and, and, and allow things to keep going the same way. So I jumped in."

Loftus is the right person for the job. She deserves your vote November 5.