Jock Talk: The price of protest 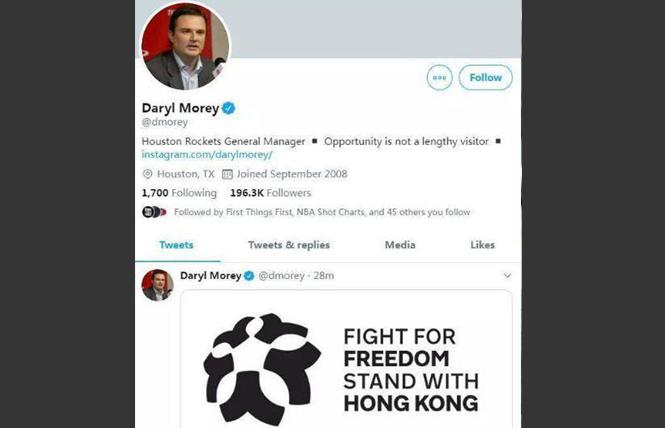 Last week, Houston Rockets general manager Daryl Morey posted a simple note on Twitter expressing his support for the cause of demonstrators in Hong Kong, who have been staging disruptive protests the past few months against the erosion of their rights in the semi-autonomous Chinese territory. How we view his tweet and its swift, utterly predictable backlash depends on what moral lens we use to view it — and how informed we are on the issues at stake.

Morey posted "Fight for freedom, stand with Hong Kong." The tweet, which he deleted after the team owner blew his lid, was accompanied by a logo used by a group urging Great Britain to apply pressure to get China to live up to the agreement it signed when Britain ceded the island nation to China in 1997. In that handoff treaty, the Chinese government agreed to ensure many personal freedoms through a semi-autonomous government in Hong Kong for 50 years, including freedom of assembly, freedom of the press — and freedom of speech.

That brings us back to Morey's tweet that China — which bit by bit has been chipping away at those rights — found so offensive.

Offensive enough for the Chinese Basketball Association, led by former Houston Rocket Yao Ming, to cut its cooperative ties with the Rockets, which make millions of dollars in the country on merchandise sales. National broadcaster CCTV said it would not air the exhibition game between the Lakers and the Nets being played in China this week and would "review" its ongoing commitment to the NBA. Sneaker manufacturer Li Ning and Shanghai Pudong Development Bank Card Center put their NBA business dealings on hold. The participation of the Nets in the opening celebration of a children's facility was canceled. Lord knows what will happen to the $1.5 billion partnership extension the NBA signed this summer with tech firm Tencent Holdings.

Initially, the NBA responded with damage control rhetoric distancing itself from Morey's words and criticizing him for the tweet. When that drew swift rebuke stateside for being gutless groveling to a repressive, totalitarian government, NBA Commissioner Adam Silver tried backtracking the league's stance, saying, "We are not apologizing for Daryl exercising his freedom of expression. I regret — again, having communicated directly with many friends in China — that so many people are upset, including millions and millions of our fans. At the end of the day, we come with basketball as an opportunity to sell dreams, sell hopes."

Not to mention jerseys and hats and broadcast rights and licensing rights.

Every day I take time to read about what is going on in Hong Kong. My interest largely springs from the fact the Gay Games are scheduled to be held there in three years and I am analyzing the way current and future events are likely to affect the viability of the event actually being held there. Currently tourism is suffering badly with unusually low hotel occupancy and empty plane seats, commerce is taking an enormous hit, and transit services have been frequently disrupted. The violent tensions have caused some events, such as the annual fireworks display to celebrate the Chinese government, horse racing, and the annual Pink Dot festival, to be canceled, but the Gay and Lesbian Tennis Association successfully staged the Out in Hong Kong Open tennis tournament last weekend. Allow me to share my thoughts on the current NBA-China situation.

The Chinese backlash is a reflection of the government's aggressive efforts to get corporations to recognize its claims over lands, threatening a halt of commerce when it does not get its way. For instance, it strong-armed major airlines to remove references to Taiwan, of which Taipei is the capital city, from its itineraries. Taiwan has never been ruled by the communist-controlled Chinese government. Not wishing to lose business, the airlines have capitulated to this fiction.

Brooklyn Nets owner Joseph Tsai criticized Morey's tweet, writing on Facebook, "The problem is, there are certain topics that are third-rail issues in certain countries, societies and communities. Supporting a separatist movement in a Chinese territory is one of those third-rail issues, not only for the Chinese government, but also for all citizens in China."

Well, that might be something to consider except that: a) the right to freedom of expression is important when a topic is controversial, not when it is something that doesn't get people riled; b) it's hard if you have a compassionate bone in your body to be more concerned about the hurt sensibilities of people versus the use of physical violence and stripping away of basic civil rights by a totalitarian government; and c) the protesters have not asked for separation from China, but rather the basic human rights, freedoms, and level of autonomy promised when Britain ceded the territory. Pretending the protests are about separation from China is one of the fictions the Chinese government has used to obfuscate the issues and give itself cover for its response.

Amnesty International has been documenting excessive use of force by police responding to demonstrations and, like the protesters themselves, called for an investigation into these instances. Those requests have been rejected by Hong Kong's pro-Beijing legislature, which is not directly voted on by the citizens of Hong Kong. That's not politics; that's brutality.

The Chinese government has repeatedly promised Hong Kong direct elections. It has never followed through. That's not politics; that's dictatorship.

Employees have been terminated by their companies for participating in peaceful demonstrations. The government has used cameras and facial recognition software to obtain the identity of dissidents. That's why in similar demonstrations five years ago Hong Kong protesters obscured their faces with umbrellas and this go round they have often been using masks — which were then banned by Hong Kong's chief administrator, who used an old colonial law to claim the dubious authority to do so, while saying the emergency measure was necessary even though she does not believe Hong Kong has an emergency. That's not politics; that's Orwellian.