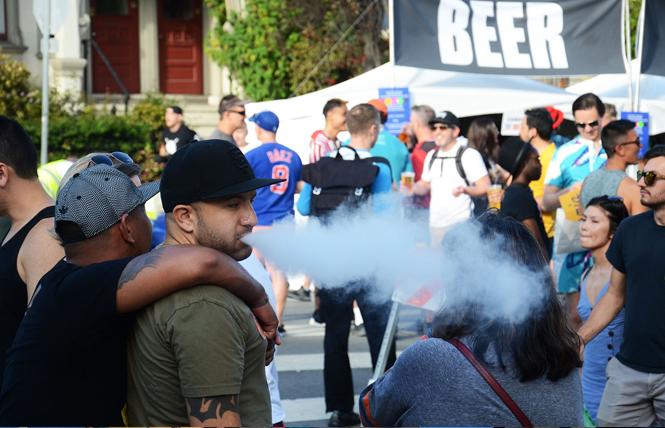 The fight over the electronic cigarette ban in San Francisco and the recent epidemic of vaping-related deaths and lung injuries nationwide has made nicotine use — both vaping and smoking — a top priority for some LGBT leaders.

"Tobacco can often fall to the back-burner with all the issues faced by the queer community," said Chad Ngo, a gay man who is the program manager of the LGBTQ+ Tobacco Control Program at the San Francisco Community Health Center. "This has sparked more of an interest in the topic area."

LGBT Americans have higher rates of tobacco smoking than that of the general population — with 20.6% of LGB adults and 35.5% of trans adults lighting up regularly, according to a 2011 Institute of Medicine report.

The same is true of vaping, with a 2016 University of Illinois study showing 9.4% of LGBTs smoke e-cigarettes compared with only 4.9% of non-LGBTs.

Perry N. Halkitis, a gay man who is the dean of the Rutgers School of Public Health, said that nicotine use among some LGBTs is part of a larger "syndemic," or link, of health issues, including alcohol abuse, methamphetamine use, and HIV infection.

Halkitis said that oftentimes these issues are associated and exacerbate each other.

"When you see one health problem, you see another. These things happen together and they fuel each other," Halkitis told the Bay Area Reporter in a phone interview. "You have to deal with the whole person; it's not enough to deal with just HIV or drug use.

"The more oppressed a population is, the more you see risk. This is a manifestation of risk associated with structural inequality," he added.

Vaping-related deaths come amid Prop C battle
The California Department of Public Health announced in a health advisory last month that it's urging "everyone" to stop vaping in the wake of an epidemic of deaths and injuries related to e-cigarette use. It followed an executive order by Governor Gavin Newsom to confront the growing youth epidemic and health risks linked to vaping.

"We are seeing something that we have not seen before," Dr. Charity Dean, acting state public health officer, said in a news release. "There are numerous unknown factors at this time, and due to the uncertainty of the exact cause, it is our recommendation that consumers refrain from vaping until the investigation has concluded."

As of press time, 18 e-cigarette users have died in 15 states and almost 1,100 have been sickened, according to the Centers for Disease Control and Prevention. No one knows why.

CDC figures show that a majority of the victims, 58%, used products that delivered nicotine in the three months before they became sick and 78% used products containing THC, the active ingredient in marijuana.

Halkitis said he is concerned that vaping is introducing people to nicotine who wouldn't smoke a traditional cigarette.

"What we're seeing is the normalization of vaping," Halkitis said. "People felt 'we're not smoking so what's so bad here.'"

The vaping death toll started to mount at around the same time as San Franciscans, particularly in the LGBT community, were bitterly divided over Proposition C, which is on the November 5 ballot. Prop C would overturn the city's ban on e-cigarette sales (a ban that would end pending Food and Drug Administration review of the products).

The major contributor to the Yes on C campaign was Juul Labs Inc., a San Francisco-based company that has most of the e-cigarette market share. But last week, Juul, after spending millions of dollars on TV ads and mailers, abruptly pulled out of the Yes on C campaign and announced it was dropping all support for the referendum.
Prop C will still appear on the ballot.

Adam Quintero, a gay man who is an e-cigarette user, said he supports the measure. Quintero argued that banning e-cigarettes will have unintended, negative consequences.

"Banning it supports a black market where there is no regulation whatsoever," Quintero said. "We know how addiction works — people will either go on BART to buy vapes out of the city, or they will break down and buy cigarettes."

Prop C opponents
Gay District 8 Supervisor Rafael Mandelman, who represents the Castro and surrounding neighborhoods on the Board of Supervisors, voted for the e-cigarette ban back in June and is opposed to Prop C.

"LGBTQ people are more likely than others to struggle with addiction and associated health issues, making us even more vulnerable to any unknown impacts of vaping products," Mandelman said in a statement to the B.A.R. "All that San Francisco is asking of Juul and other companies is to press pause until the U.S. Food and Drug Administration determines whether their products are safe to use."

Mandelman said he was happy with the Juul development.

"I'm glad to see that Juul has pulled out of the Prop C campaign and hope that this action signals a real willingness to work with public health officials instead of circumventing regulation with costly ballot initiatives," Mandelman said.

He and other Prop C opponents said they were against the company developing city policy. If Prop C passes, it would replace the ordinance banning e-cigarette sales with regulations supported by Juul.

Yes on C had been an active campaign. There had been an event in support of Prop C at the Stud, an LGBTQ bar in the South of Market neighborhood, Quintero said.

Education
Halkitis said that the best strategy to reduce nicotine use among LGBT people would be providing resources and information that's focused both locally and intersectionally.

He said many LGBT people, particularly people of color, often don't engage with traditional anti-nicotine programs because they are afraid of being judged about their identities.

"We need to meet LGBT people where they are," he said.

Meeting LGBT people where they are is the mission of the Out Against Big Tobacco Coalition, a tobacco control program under the statewide LGBT group Equality California whose work is centered in the Los Angeles area.

Out Against Big Tobacco is trying to get tobacco coupons and flavored products banned in parts of Los Angeles County, including in West Hollywood. It is also present at Pride events and does specialized presentations and literature.

"A large component of this program is through educational presentations," said Beatriz Valenzuela, a bisexual woman who is communications manager with Equality California. "The presentations aren't always formal — we do them at events like Pride and at places like Mi Centro (a center for Spanish-speaking LGBTs)."

Valenzuela said that the response has been "overwhelmingly positive."

"One event three of us went to was a teacher meeting about LGBT students and we had so many educators come up to us and they were grateful for the information, but also taken aback by the info that one Juul pod has as much nicotine as a pack of cigarettes," said Valenzuela. "Theoretically you can have a middle school student smoking a pack of cigarettes a day — depending on how often they're using it."

Ngo is one of two project managers responsible for doing similar work in the Bay Area in his position with the San Francisco Community Health Center. Much of the center's work has been focused in the South Bay, particularly among LGBT college students, though it did have a presence at San Francisco Pride.

"The work has pretty much been done here in the city in terms of the flavor policy (the ban on flavored tobacco products)," he said.

Ngo and Halkitis both said that the tobacco industry has specifically targeted LGBT people over the years, knowing that they are at a higher risk of smoking.