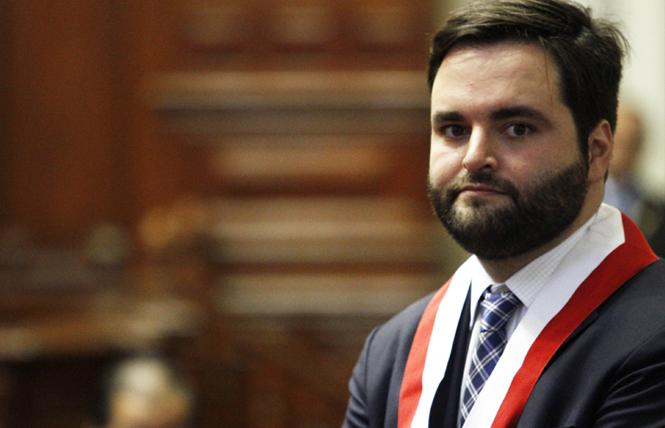 "Thank you so much for allowing me to serve my country and all of you," de Belaunde tweeted September 30. "I apologize for what I could not do and if at any time I was not up to your expectations, know that I left my heart and soul, and I will always be grateful for the opportunity and support."

The Bay Area Reporter contacted de Belaunde over the weekend but wasn't able to connect for an interview.

In a message to the Bay Area Reporter, Bruce wrote, "For President Vizcarra, I'm not a congressman anymore. For us [members of Congress], we are still congressmen and the true president of Peru is our vice president Mercedes Araoz."

Congress appointed Vizcarra, who had served as vice president, in March 2018. He succeeded Pedro Pablo Kuczynski, who, at the time, was facing an impending impeachment for alleged graft and vote-buying.

Peru has been rocked by ongoing political scandals since 2016. It's tied to the fallout from Brazilian construction conglomerate Grupo Odebrecht's corruption scandal where company officials spent millions of dollars bribing public officials to gain lucrative contracts.

Odebrecht officials confessed to corruption and, in 2016, signed a deal with United States and Swiss authorities paying out $2.6 billion in fines, reported the BBC.

However, the scandal didn't end with the payout. According to experts, it has uprooted Peru's political system. It has brought down some political leaders, such as Keiko Fujimori, the daughter of former Peruvian President Alberto Fujimori, who is currently in jail.

Vizcarra's political maneuver comes after months of calling for general elections. The New York Times reported that the opposition party that rules Congress has repeatedly delayed holding an election.

Some lawmakers attempted to suspend the president for 12 months, nominating Araoz as the new head of state on Monday.

For the people
Earlier this year, it was reported that de Belaunde called for an investigation of all "congressmen, politicians, and personalities" connected to Odebrecht.

He is also is a leading figure in the South American country's marriage equality campaign and was working on legalizing medical cannabis, according to a Victory Institute news release.

De Belaunde told Reuters that his same-sex marriage bill, which he introduced in Congress for debate in 2016, and a gender identity bill were "doomed" for this year. He made the remarks while attending a Victory Institute event in Bogota, Colombia in May.

"Our bill for marriage equality and our bill for gender identity, well they are, like, doomed," said de Belaunde.

He added, "We are still fighting. I think every time we talk about this issue we move forward, but the thing is, we don't have the votes."

The constitutional lawyer, university professor, and author, who lives with his boyfriend of seven years, noted that a conservative Congress in the majority Catholic country and a growing evangelical movement in Peru are making progress on LGBT rights challenging.

"We have no legal recognition," said de Belaunde, who pushed for the legalization of same-sex marriage for three years in Congress.

Peru is one of three South American countries, including Paraguay and Venezuela, that hasn't legalized same-sex marriage.

De Belaunde also served as secretary of the Congressional Committee on Science, Innovation and Technology and contributes to the newspaper, Correo.

Victory Institute supporters can vote for a nominee to be awarded the Baldwin award by going to https://bit.ly/2lZCvvW.

Voting closes October 7. The winner will be announced October 9 and honored with the award at the International LGBTQ Leaders Conference in Washington, D.C., November 13-16.

United Press International reported that the Equality March, as it was called, attracted an estimated 1,500 attendees.

They watched rainbow flags wave as marchers chanted and carried signs with slogans, "Love is love," as they walked through the streets of the southeastern Poland city, reported United Press International.

Pride organizers were concerned the ban would happen again, but Friday, the Court of Appeal upheld the district court's decision allowing the march to go forward.

The party is leading in the polls.

PiS leaders have spoken out against Poland's LGBT community and growing number of Pride parades, calling homosexuality an invasive foreign influence and claiming it undermines traditional Polish values in an appeal to conservative, mostly Catholic Poland.

Reuters reported that PiS leader Jaroslaw Kaczynski urged Poles to resist the "traveling theater" of Pride marches, describing them as a "real threat to ... the Polish state."

In August, global market research firm Ipsos conducted a survey for a Polish website OKO press. The survey found that Poles rank the LGBT movement as one of the most serious threats to the country, second only to climate change, reported Reuters.

According to the Associated Press, in 2017, there were only seven Pride events. The number of events more than doubled to 15 in 2018. This year set a record of 25 pride events in the country so far.

French lesbians one step closer to legal
Members of France's National Assembly burst into applause as they extended access to reproductive technologies to queer and single women September 27 in a 55-17 vote.

The bill will now go to the Senate to be voted on before it can become law.

Currently, only heterosexual couples in France can legally use reproductive technologies, such as utilizing sperm donors or in-vitro fertilization. Queer women couples and single women have to travel abroad to access fertility clinics to have children.

It is the biggest social reform of President Emmanuel Macron's administration since he took office in 2017.

If approved, France will join other European nations, such as Belgium, Britain, Ireland, the Netherlands, Portugal, Spain, and Scandinavian countries that have legalized medially assisted reproductive procedures.

Not everyone is happy about the bill's passage.

The Guardian reported that a planned October 6 rally in Paris against the bill has been called by a coalition of about 20 conservative groups, stating it will "deprive children of their fathers."

Even some members of Macron's own centrist party are against the bill.

Macron has acknowledged the "political risk" of the legislation and the backlash when former President Francois Hollande legalized same-sex marriage.

In 2013, France legalized assisted reproductive technology for straight couples but continued banning the practice for gay couples and single women. Surrogacy was banned for both straight and gay individuals.

GATE seeks feedback for trans movement strategy
Organizers of Global Action for Trans Equality are seeking feedback from transgender communities around the world to develop a strategy for the organization's next 10 years.

The 15-minute survey is available in English, Spanish, French, and Russian at, https://transactivists.org/take-our-survey