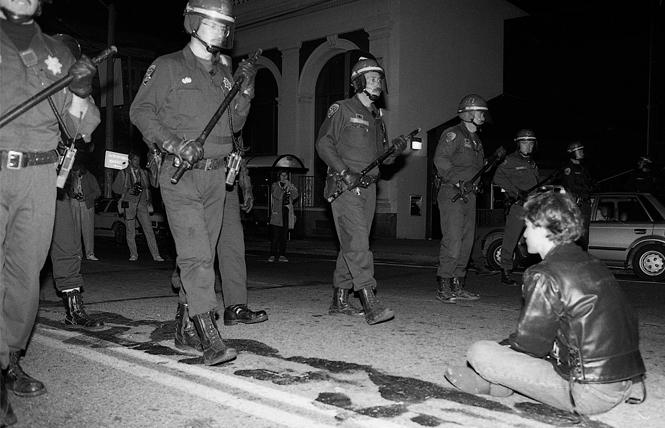 A single activist sits down in the middle of Castro Street as San Francisco police march in riot formation down the street on October 6, 1989. Photo: Rick Gerharter

The 30th anniversary of the Castro Sweep police riot comes at a time when LGBT and police leaders disagree about how far the San Francisco Police Department has evolved in the ensuing decades.

On October 6, 1989, police cleared the streets in the Castro, seemingly in retaliation for a protest against federal inaction on the AIDS epidemic that occurred earlier that day near City Hall at what is now called the Phillip Burton Federal Building at 450 Golden Gate Avenue.

The Castro Sweep deepened divisions between the LGBT community and the police, which had already been frayed by decades of harassment in bars, the assassination of gay Supervisor Harvey Milk by former police officer and disgruntled ex-supervisor Dan White in 1978, and the subsequent White Night riots the following year.

The downtown protest was put on by the local chapter of the AIDS Coalition to Unleash Power, or ACT UP, a national group of predominately gay activists who used theatrical demonstrations to call attention to the plight of gay men during the darkest years of the epidemic.

"This was an AIDS protest," said Terry Beswick, a gay man who was in the Castro that day. "We were fighting for our lives."

Beswick was one of the founders of ACT UP/San Francisco, but he had stopped being active with the group by the time of the sweep. Nevertheless, he ran into the protest as it was making its way up Market Street to the Castro and decided to join in.

Tensions between the protesters and police rose throughout the march until it reached the Castro, when some demonstrators sat down in the middle of the street as part of a "die-in."

"What they were doing — it was a peaceful protest," said Beswick, who is now executive director of the GLBT Historical Society.

It was then that the police made the move to clear not only the street but also the sidewalks, forcing people to stay inside of restaurants, bars, and other businesses for about an hour and injuring people who got in the way.

"People that were there were yelling at (the police), trying to keep their neighborhood," Beswick said. "I was pretty angry."

Beswick said he kicked the tires of a police motorcycle in front of the Twin Peaks Tavern at Market and Castro streets before deciding to resist in another way.

"In all my AIDS activism, I never did something that was violent, so I decided to do nonviolent resistance by sitting in the middle of the street," he said.

Beswick expected to get arrested, but the phalanx of police moving toward him were quickly distracted by something else and he was not.

"This was an egregious attack on our community that was built on decades of police oppression," Beswick said.

All told, 53 people were arrested and 14 were injured, including four police officers. The next night 1,500 people came out to the Castro to symbolically reclaim the street.

Then-Police Chief Frank Jordan, who became mayor three years later, responded to the incident by demoting his own brother, Deputy Chief Jack Jordan, for how he handled the affair. Jack Jordan suddenly resigned from the SFPD a month later.

Tom Ammiano, a gay former school board member, supervisor, and state assemblyman, said he was at the ACT UP protest that day with his lover who subsequently died of complications from AIDS.

"We left before the shit hit the fan," Ammiano recalled.

'When do we stop apologizing?'
Thirty years after the sweep, however, SFPD and community leaders still find themselves at odds about how far the department has gone in the direction of equality.

Ammiano said that when Jordan was elected mayor, "we had to square off given that history," but that he feels the two of them helped move the needle on LGBT issues together even considering Jordan's more conservative reputation.

"He came in as very moderate and I always thought that was out of touch, but we did good," Ammiano said.

Ammiano said that the SFPD has improved since 1989, mentioning increased numbers of LGBT representation on the force.

"But the orientation of any officer takes second place if there's police malfeasance," he added. "Whether they're straight or gay, you're still getting the shit beat out of you."

Tony Montoya, a gay man who's president of the San Francisco Police Officers Association, stressed the improvements of the past decades, citing this year's SFPD Pride patch, increasing numbers of LGBT officers, and straight recruits no longer bothered by the presence of LGBTs on the force. The SFPD Pride Alliance, an affinity group in the department, unveiled the Pride patches this spring. Through sales of the patches, about $19,000 was raised for Larkin Street Youth Services, a nonprofit that provides housing and other services to youth, including LGBTs.

Still, the police and community leaders butted heads earlier this year when two protesters against police participation in this year's LGBT Pride parade were taken into custody after blocking the parade and allegedly scuffling with police.

In late August, Police Chief William Scott held a "reflection and reconciliation listening session" at Glide Memorial Church in the Tenderloin where he apologized for the SFPD's historical mistreatment of LGBT people. The timing of the meeting was the anniversary of the Compton's Cafeteria riots, which took place in August 1966. Transgender women, hustlers, and queer youth who frequented the all-night eatery became fed up with routine harassment from the police, which sometimes included arrests for female impersonation, and fought back.

At the August meeting, some people appreciated the chief's apology while others remained critical of the department.

Montoya said that while "the chief did what he felt he needed to do," he doesn't think the apology was "completely necessary."

"He takes direction from above his pay grade, meaning Room 200 of City Hall," Montoya said, referring to Mayor London Breed. "When do we stop apologizing? Are my children going to be apologizing for something that happened before they were born?

"If some people needed to hear that for a sense of closure, I'm OK with that too," he added.

For her part, Breed, during an editorial board meeting with the Bay Area Reporter last Friday, said she did not know about Scott's apology at Glide Memorial until she was told by the paper. She did not order the chief to apologize.

"Everybody takes direction from me who works for any city department," Breed said. "I didn't know about it and I have not given the chief any direction. He did this on his own."

Breed also said that "we all know the challenges" of law enforcement interactions with various communities, including African Americans and LGBTs.

"The fact that the chief had the courage to be open about the discussion and did it from a place of love at Glide ... Cecil was one of the champions," Breed said, referring to the Reverend Cecil Williams, who became pastor at Glide in the 1960s and embarked on various initiatives to bring communities together. Now 90, Williams is pastor emeritus.

Scott was asked to comment for this article, but his spokesman declined. Instead, the SFPD emailed a statement attributed to lesbian Commander Theresa Ewins.

"We are indebted to the enormous volume of work by community members, city leaders, and San Francisco Police Department LGBTQ and nonbinary officers, past and present, who are contributing to foster positive changes within law enforcement," it read.

Beswick said it was "interesting" to see the recent police apologies, not only in San Francisco but in other cities as well. New York City Police Commissioner James O'Neill apologized in June for the actions of his department during the Stonewall riots 50 years ago.

"I haven't heard them apologize for what happened in the Castro that night," he said.