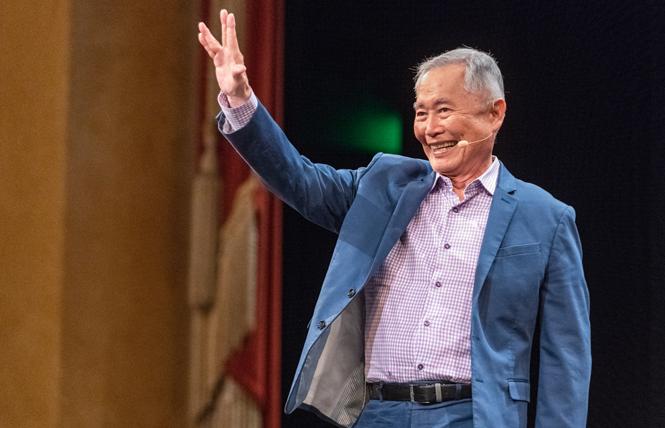 George Takei is on a mission to make sure younger generations know about one of this country's darkest chapters.

Takei, widely known for playing Hikaru Sulu in the "Star Trek" series, was one of the few Asian Americans on TV when it aired in the 1960s. Now 82, he came out as gay 14 years ago and has a savvy social media presence where he comments on his life experiences, issues of the day, and LGBTQ rights.

He was in San Francisco Tuesday, promoting his latest project, a well-received graphic memoir "They Called Us Enemy," based on what he and his family went through when they were forced to go to a U.S.-run internment camp during World War II. He appeared at the Commonwealth Club and was interviewed by Mina Kim, evening anchor at KQED, who kept the pace of the conversation moving so that a broad spectrum of topics could be covered. In just over an hour, both current events and recent history were brought up and dissected, alongside issues as personal as sexuality and the parent-child relationship.

Takei has shared his internment story over the years and the graphic memoir vividly brings it to life. Weeks after his 5th birthday in 1942, he and his family were rounded up, along with thousands of others, and forcibly moved into prison camps.

"Literally, at gunpoint, ordered out of our homes," Takei said, painting a grim scene.

He and his brother were looking out the window early one morning after being woken up by their frantic parents when two soldiers carrying rifles "with shiny bayonets on them" walked up the front drive. Takei remembers the fear through the memories of his parents, recalling his mother leaving the house with "a duffel bag in one arm, baby sister in the other, and tears streaming down her face."

From there, the family was brought to a temporary camp set up at a horse track where they stayed in the horses' stalls until the more permanent housing was ready. After a few weeks, they were moved to a camp in Arkansas, built among the swamps and the undergrowth. For Takei's parents, this was all a crushing, disheartening experience, he said. For the young Takei, it was seen a bit differently.

"To 5-year-old me, it was fun to sleep where the horsies slept," he said, laughing about the stark contrast between his parents' reality and his own at the time. "When we got to the camp, I thought it was a fantastical place."

One of the most interesting aspects of Takei's story is how a child can experience something as traumatizing as being forced from one's home and imprisoned for no reason as an adventure. Takei described the wet, marshy environment in and around the camp as "fantastical" to him.

"The magical thing was that there were these trees growing out of the water," he said, as he went into detail about exploring the area and finding tadpoles that he thought were fish then later watched morph into frogs.

"Do you remember a time when it stopped being fun?" moderator Kim asked, and even in the answer to that question, Takei's memory of fear is ciphered through his parents.

"Thinking back, I awoke one night and saw my parents hovering over a kerosene lamp having a hushed conversation," he said. "My mother sounded like she was crying. ... They were discussing the loyalty questionnaire."

Japanese Americans were given a questionnaire that asked if they were loyal to America. Many of the questions were convoluted and contradictory; other questions implied that just to be of Japanese descent was to have a loyalty to Japan over the U.S. To Takei, this was beyond the pale.

"We were Americans. My mother was born in Sacramento, California," he said. The belief of "an innate racial loyalty to Japan" was a subtle but insidious form of othering, scaffolding on which racism is built, he said. Even out of the camps, Takei saw how differently he was treated because he was Japanese. This led him to remain closeted for a long time, as he was very conscious of being an "other."

In the entertainment industry, Takei was able to succeed at a time when Asian American representation was inadequate but he was also acutely aware of what it meant to be a gay person. He watched one of his favorite crushes, the late Tab Hunter, go from matinee idol to obscurity after being outed by the gossip rag Confidential. Takei understood that in order to keep the career he loved so much, he'd have to keep that part of himself quiet.

"I didn't want to be different," he said. "We were imprisoned because we were different."

That all changed when he publicly came out in October 2005 and said he'd been in a committed relationship with his partner, Brad Altman, for 18 years. (The two are now married.)

Considering the course of his life, Takei said that has taken everything he's gone through in stride. He continues to be an activist for equality as well as human rights, and spoke at length about how horrified he is by the current situation at the U.S.-Mexico border. He has spoken out against President Donald Trump and his administration's policies. He works to produce films and TV shows by and about Asian Americans, and was visibly excited when mentioning the recent shows with majority Asian casts. Despite a political and social climate today that might seem overwhelming and a history that shows the ugliness behind a revered, patriotic era, Takei remains hopeful.

"Cynics and pessimists say you can't do anything, it's not possible," he said as a closing message to the audience. "I'm an optimist. Optimism is what moves us forward."