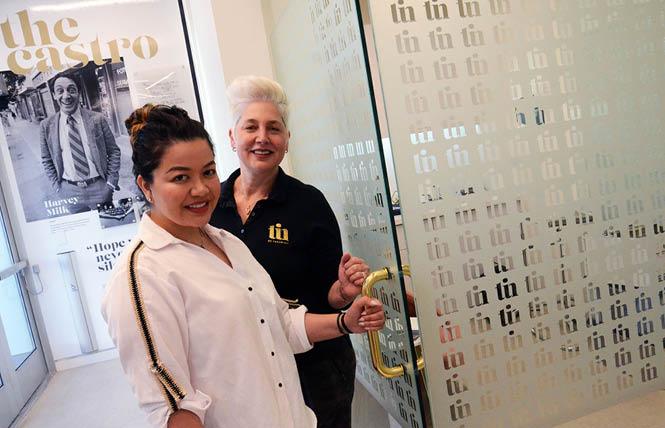 A lesbian-owned independent pharmacy chain is opening its flagship location in the Castro this weekend in a new storefront on upper Market Street. It will also be the first independent pharmacy in California to provide its customers 24-hour access to their medications through a kiosk known as an automatic drug dispensing system.

TIN Rx Pharmacy will open its doors Saturday, September 28, at 2181 Market Street. The retail space was carved out of the former Myriad food hall and was where the bar Mrs. Jones had operated.

It is the company's third location and its first pharmacy in an urban setting. Life and business partners Christina Garcia and Patricia J. Nachman opened their first location in 2017 when they took over a rural pharmacy in Los Molinos, California north of Chico. The business, Latimer's Pharmacy, has operated in the Tehama County community since 1946.

The following year the couple acquired a second rural pharmacy, Old Time Drugs, in nearby Corning, California. It first opened in 1970.

"This business is dreamed up by pharmacists and created by pharmacists to cater to our patients," said Garcia. "I am in a fight to keep independent pharmacies open."

When they first took over the Los Molinos pharmacy, the women received death threats due to being a lesbian couple, recalled Garcia. But as the community came to know them, and realized they are the biggest private business with a location in town, the women came to feel embraced.

"We employ over 50 people with up to 20 employees between the two rural pharmacies," said Garcia, "so they always come to us for support for fundraisers. Once they knew we would always be there for the community, the community warmed up to us."

The couple, together eight years and engaged to marry, has their headquarters in downtown San Francisco. They spent 18 months looking for a retail space in the Castro neighborhood where they could open their flagship pharmacy. When they signed their lease in May, the women were unaware that health care provider One Medical had taken over the remaining food hall space and would open next door to them.

"It was a coincidence," said Garcia, 37, who graduated from the Pacific University School of Pharmacy in 2013.

TIN stands for The Independent Network and also is a nickname for Garcia, who emigrated from the Philippines with her mom and four siblings in 1999. They moved into a one-bedroom apartment in San Francisco. Her father, who died in 2008, came to the U.S. years later.

Nachman, who goes by PJ, is the company's chief operating officer. She was born in Tennessee and grew up in Miami. She turns 51 this Saturday, the same day as the pharmacy opens its doors in the Castro.

In an interview with the Bay Area Reporter to show off their new location, the women said they are excited to return an LGBT-owned pharmacy to the city's famous LGBT neighborhood. It is believed the last gay-owned independent pharmacy in the Castro was Star Pharmacy, which closed in 1985. Its location, at the historic intersection of 18th and Castro streets, is now a Walgreens store and pharmacy.

"We have been trying to bring this pharmacy to the community for quite a while. We are bringing our care back to our community, our LGBTQ community, which is very important for us," said Nachman. "Being gay-owned and operated is just one facet we bring to the community. People are a little bit tired of being just another number at a pharmacy or just another prescription."

As it happens, the new TIN Rx Pharmacy is two doors down from a Walgreens store and pharmacy. But the women are not trying to compete head-to-head against the national chain or its rival CVS.

"We are more patient-centric," said Garcia. "I can compete with service and new innovations against the chains."

Unique experience
They are aiming to provide their customers a unique experience, one not only tailored toward patient-centered care but also affirming of their customers' health choices, whether it be LGBT individuals, people of color, or women. They are strong proponents of PrEP and PEP, the medications taken before or after sex, respectively, to prevent the transmission of HIV.

They also advocated on behalf of legislation passed by the state Legislature this year that will allow pharmacies to furnish a 30-day supply of PrEP without a doctor's prescription. It is awaiting Governor Gavin Newsom's signature to become law.

TIN furnishes birth control pills and Plan B, the morning after abortion pill, and works closely with transgender individuals taking hormones to assist with their gender transition. The pharmacy also sells its own line of vitamins and will stock various over-the-counter medications for sale.

First-time TIN customers have a 15-minute consultation with one of TIN's pharmacists to go over their medications and any issues they may be having in maintaining the right dosing regimen or reactions to their prescriptions.

TIN has a machine that will pre-sort a person's prescriptions, no matter how many, into daily packets so it is easier for customers to maintain their dosing regimens. It also allows the location's seven pharmacists to spend more time with customers rather than counting out the right number of pills to fill their prescriptions. Customers can ask for their medication to come in one bottle if they prefer; the pharmacy also provides online ordering of refills and discreet packaging for delivery orders.

Nachman and Garcia split their time between homes in Vacaville, California and Ft. Lauderdale, Florida. They are looking to expand into more LGBT neighborhoods, with their location on Santa Monica Boulevard in West Hollywood set to open in January.

For their Castro pharmacy, the women bought the photo rights from Getty Images for a black-and-white shot of a smiling Harvey Milk, the late gay San Francisco supervisor, standing in front of his Castro Camera store on Castro Street. It adorns the left wall of the entrance that also features a timeline of the local LGBT community's history.

Included is the last page of an AIDS patient's diary with a note from the anonymous person that says, "if you are reading this I am dead." There are also photos of Star Pharmacy.

"Our young patients don't understand the history of HIV. It is something they should not forget," said Garcia in explaining the idea behind the wall installation.

Next to the historical timeline is the computerized kiosk, known as an ADDS machine, that will dispense customers' prescriptions afterhours. There is a sliding wall that can be locked in place to close off the entrance area when the pharmacy isn't open.

Only customers with an established account with TIN will be able to utilize the kiosk. They will be given a keycard in order to open the front doors and gain access to it. It will be able to dispense non-refrigerated medications, including painkillers, from unmarked boxes that the machine will randomly open.

"Nobody will know what box holds what items," said Garcia, explaining the randomized system is meant to deter thieves.

To learn more about TIN Rx Pharmacy, visit its website at https://www.tinrx.com/