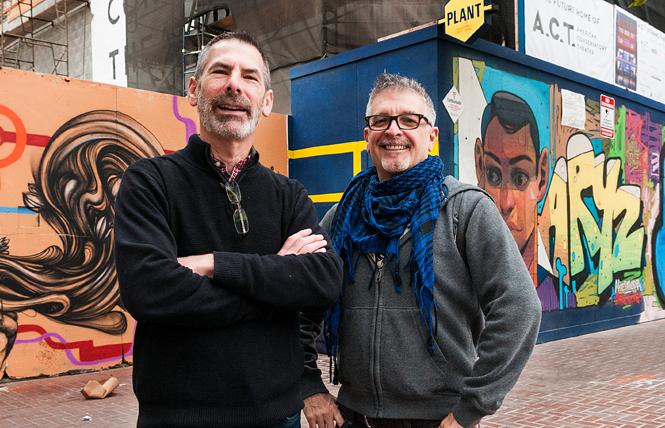 There is a brief moment toward the end of the documentary "5 Blocks" where an anonymous woman can be heard screaming "Get off my block!" in the background of a shot showing traffic on Market Street near the intersection of Eighth Street.

The street-life vignette is easy to miss in the 47-minute film by directors Dan Goldes and the late Robert Cortlandt, friends who met at a weekly gay country western dance party. Yet the verbal directive encapsulates in four words what is at the heart of the film.

Begun in 2011 as city, civic, arts, and business leaders brought renewed attention to the gritty stretch of Central Market Street between Fifth and 10th streets, the film explores the tension at play in those efforts to attract new investment and businesses to the corridor while at the same time not pushing out the residents, nonprofits, and artists who have long called it home.

"The affordable housing in the neighborhood, generally speaking, is protected by law. So the question becomes how do you create a neighborhood that works for a very low-income population and a very high-income population at the same time," said Goldes, referring to the many single-room-occupancy hotels in the area. "I think that has always been the challenge. That is not new."

The film tracks the decline of the once thriving theater district in the heart of San Francisco to the building of the regional BART transit system in the 1960s that saw Market Street dug up to install the underground tunnels for the interurban subway. The construction resulted in a slew of locally owned businesses shuttering and many of the theaters either torn down or turned into adult movie houses.

Over the next five decades there was little that changed on those five blocks of Market Street, a place most residents and tourists went out of their way to avoid. Many residents who called it home felt ignored by City Hall.

Things began to change in 2011 when the late Mayor Ed Lee and former District 6 Supervisor Jane Kim championed a tax break for businesses willing to relocate to Mid-Market and bring with them new jobs. For doing so, they would be exempt from the city's 1.5% payroll tax until the incentive expired in May of this year.

It became known as the Twitter tax, since the social media company dropped plans to move out of the city and instead moved into the top floors of the renovated former furniture mart building between Ninth and 10th streets. Over the tax's eight years businesses saved a total of $70.1 million and added 10,000 new employees to the area.

Central Market's commercial vacancy rate declined from 25% to 4%, while 4,333 new housing units were built, with 25% designated as affordable. Whether the tax benefited the city or merely super-charged the gentrification of the surrounding neighborhoods remains open for debate, and is a question left unanswered by the filmmakers.

"My way of answering that question when we thought about making this film is the Twitter tax exemption piece was just one of lots of things going on down there. That's really what interested us," said Goldes. "There was this movement that had a city policy piece: the tax exemption. But it also had this economic strategy tied to it that included using the arts as a way to revitalize the neighborhoods."

When they began filming in 2011, recalled Goldes, there was no guarantee that anything would happen along that portion of the city's main thoroughfare. The filmmakers at first thought they would spend the next five years following residents, arts leaders, city officials, business leaders and others in order to document what changes, if any, would be brought to bare.

"There was some sense we would spend time documenting a project that might never happen, so we didn't quite know what we were getting into," said Goldes, 57, who lives in the city's Glen Park neighborhood, a short BART ride away from Mid-Market.

Rather quickly it became apparent that the tax break was having an impact. Not only were businesses drawn to Mid-Market, developers scooped up various parcels that had long been neglected and transformed them into new hotels, stores, housing units and office spaces.

"It's the ghetto in the middle of an oasis of business," as painter and SRO tenant Sylvester Guard describes his neighborhood in the film. He later notes, "We've got Twitter and down the street homeless crackheads."

In the midst of filming Cortlandt was diagnosed with lung cancer and in 2015 moved to San Diego to be near his sister. He died in 2016 at the age of 57, leaving Goldes to complete their film. It will have its premiere, dedicated to Cortlandt, at 1 p.m. Sunday, September 29, at the Roxie Theater as part of this year's San Francisco Green Film Festival, where it's a finalist for the Green Fire jury award.

He hopes viewers of the film will come to realize that any city planning process is going to be complex and come with both benefits and difficulties.

"It is not linear and sometimes messy," said Goldes, adding that, "generally speaking people have good intentions but those people are coming from different perspectives when they do this kind of a project."

Tickets for the premiere showing of the film at the SF Green Film Festival can be purchased online at https://www.greenfilmfest.org/