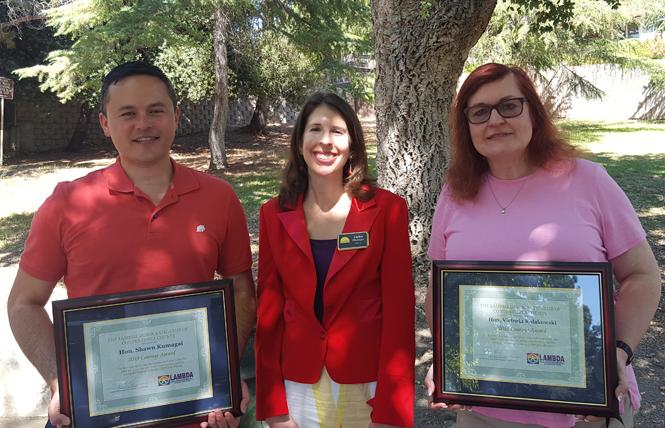 The Lambda Democratic Club of Contra Costa County honored gay Dublin City Councilman Shawn Kumagai, left, and Alameda County Superior Court Judge Victoria Kolakowski, right, a trans woman, with Courage Awards at its third annual barbecue Saturday, September 14, in Concord, where they were joined by Mayor Carlyn Obringer, center. Club officials selected Kumagai for his role in getting his city to fly the rainbow flag during Pride Month, and the effect it had on many other East Bay cities either flying their own Pride flags or issuing Pride proclamations this year. Kolakowski, the only elected trans trial court judge in the country, was selected because she is viewed as a role model for other trans people seeking to enter the legal profession. Club political action committee chair Joey D. Smith also told attendees that the night before, the Lambda club received an Ally Award from the Contra Costa County Central Labor Council for its work in leading municipalities to fly the rainbow flag back in June. (Kolakowski is the wife of Bay Area Reporter news editor Cynthia Laird.)