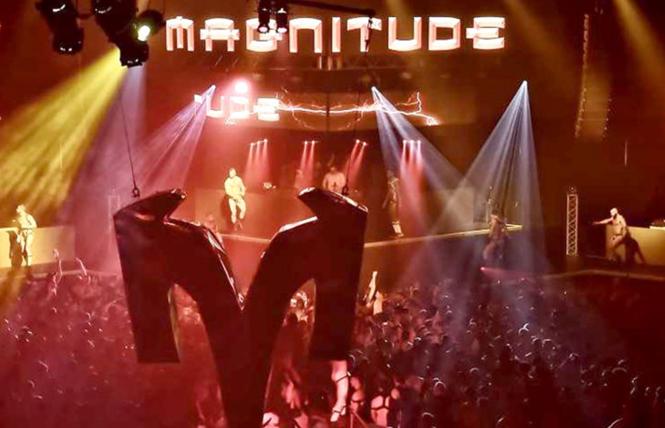 Magnitude, the former opening dance party of the Folsom Street Fair, is being replaced with the smaller Full Fetish event this year. Photo: Courtesy FSE

Last year, thousands of leathermen danced in a fort by the sea. The year before, they danced in an armory run by Kink.com. This year, no former military structures will become kinky dance halls because Magnitude, the opening dance party of the Folsom Street Fair, has been canceled.

A new opening party, Full Fetish, will take its place.

It appears that cost was a factor in Magnitude's demise.

Neither Patrick Finger, executive director of Folsom Street Events, which produces the leather extravaganza and Magnitude, nor other staff responded to a request for comment from the Bay Area Reporter. But Finger explained to reporters at The Fight magazine that, "the big reason is cost." Finger claimed the rental fees of the spaces that used to host the party cost between $50,000-$75,000 and that the expenses for soundstages, lighting, dance floors, and other equipment were high as well.

Last year, Magnitude, the proceeds of which go to charity, lost money for the first time, according to The Fight. FSE also had difficulty finding a space that would allow what Finger called, "getting frisky."

Low attendance may have also contributed to the dance's cancellation. Finger told The Fight that the dance had "approximately 2,500 attendees." Advertisements on the Fort Mason center website for the dance last year say, "join more than 3,000 of the hottest leathermen from around the globe."

According to Folsom Street Fair's website, it has donated over $6 million to charity over the years. The first Folsom Street Fair was intended to support the South of Market neighborhood and prevent urban renewal.

Magnitude was founded in 1997, the first year where the Centers for Disease Control and Prevention reported a significant decrease in AIDS-related deaths, according to a San Francisco Examiner article. It was originally an independent, for-profit dance that later became the opening party of the street fair. Jilto Garcia created Magnitude because, "he wanted to bring the gay scene back to life," according to an October 2002 interview with the paper.

This year, the opening party of the Folsom Street Fair will be the smaller, Euro-style Full Fetish party. Euro style is the European variant of "gay male, leather/kink/fetish culture," according to the B.A.R.'s leather and kink columnist, Race Bannon, "...embrac[ing] a wider range of gear, fetishes, and kinks than North American men's kink culture."

A gay man who has volunteered at Magnitude for 10 years said he will miss the event. The man, who asked to remain anonymous, said he had trouble getting an answer from FSE staff about why Magnitude was not happening.

Full Fetish takes place Saturday, September 28, from 10 p.m. to 4 a.m. at 550 Barneveld in San Francisco. The party is for 21 and over. For tickets, go to https://www.folsomstreetevents.org/full-fetish-san-francisco/